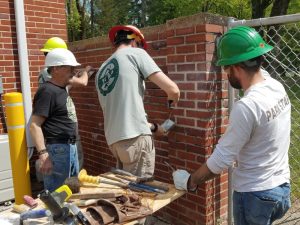 This April, Preservation Maryland and the Jewish Museum of Maryland will host author Elaine Weiss for a lecture on the nail-biting climax of one of the greatest political battles in American history: the ratification of the constitutional amendment that granted women the right to vote.

Elaine Weiss is the author of the forthcoming book, “The Woman’s Hour: The Great Fight to Win the Vote,” that centers around Nashville in August of 1920 at a time when only one more state was needed to ratify the 19th Amendment. After a seven-decade crusade for the vote, it all comes down to Tennessee, and it is the moment of truth for the suffragists. But there are powerful forces opposing woman suffrage–corporate, political, and ideological foes–who have their own reasons for denying women the ballot. And then there are the Antis–women who fear suffrage will bring about the moral collapse of the nation. They all converge on Nashville for a vicious face-off, replete with dirty tricks, betrayals and bribes, bigotry, booze, and the Bible.

A Jewish “militant” Suff plays a starring role in the drama; a Jewish Tennessee delegate, dedicated to justice, becomes a hero; and Maryland stands on the wrong side of history. And at the very last moment, a crucial vote of conscience is secured by a mother’s letter.

This program is part of Preservation Maryland’s statewide project to correct the historic record and include the contributions of Maryland’s suffragists in official histories and to help tell the story of their remarkable efforts.

Register for the event

From her publisher, Penguin Random House: Elaine Weiss is an award-winning journalist and writer whose work has appeared in The Atlantic, Harper’s, The New York Times, and The Christian Science Monitor, as well as in reports and documentaries for National Public Radio and Voice of America. A MacDowell Colony Fellow and Pushcart Prize Editor’s Choice honoree, she is also the author of Fruits of Victory: The Woman’s Land Army in the Great War (Potomac Books/University of Nebraska Press).