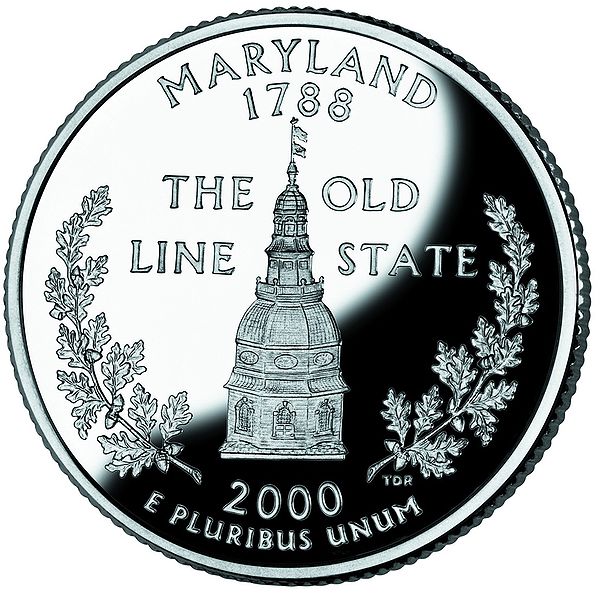 On September 17, 1787, the Constitution was accepted by the state delegates at the Constitutional Convention. Daniel Carroll, James McHenry, and Daniel of St. Thomas Jenifer signed the Constitution on Maryland’s behalf. The document was then sent out to the thirteen states for ratification. Each state had six months to meet and debate the Constitution, deciding whether or not to approve or decline it. Two months later, in November, the Maryland Legislature decided that April of the following year would be the time to consider the Constitution. The convention would take place in Annapolis. 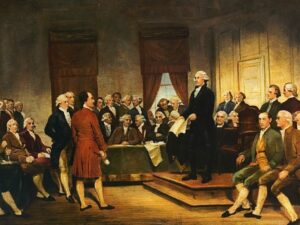 Washington at Constitutional Convention of 1787, signing of U.S. Constitution. Image from Wikipedia.

In the months leading up to April, everyday Marylanders learned the news about the Constitution. In the newspapers and on the streets, they began debating the merits of the Constitution themselves. Many individuals disliked that the proposed document did not contain a bill of rights. However, Maryland was a Federalist state; the majority of Marylanders wanted to amend the Constitution, not eliminate it.

From April 21-28, 74 delegates attended Maryland’s Ratification Convention, meeting in the House of Delegates chamber of the Annapolis State House. On April 26, 63 delegates voted to approve the Constitution. There were no amendments made. The convention closed on April 28th with Maryland becoming the seventh state to ratify the new Constitution.

On May 1, 1788, a parade was held in Baltimore to celebrate Maryland’s ratification of the U.S. federal Constitution.

Did you know? The South Baltimore neighborhood of Federal Hill’s name alludes to that celebration in 1788, which culminated on the hill.

Content for this blog was compiled with the help of Allyn Lawrence, Preservation Maryland’s Spring 2022 Public History and Communications Intern. Working through the Waxter Intern Program, Allyn composes articles on topics relating to Maryland’s history and culture. She is a recent graduate of Towson University.