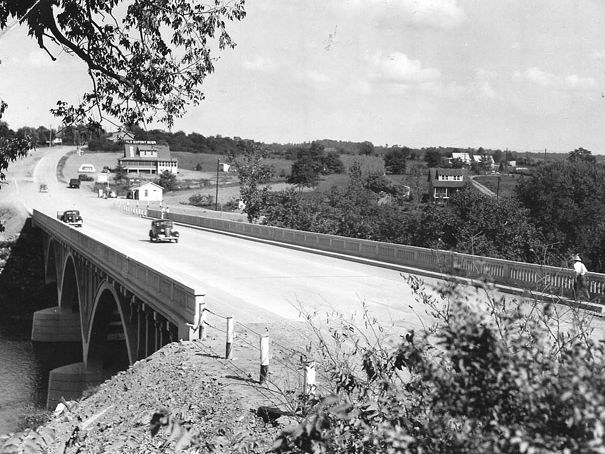 The Conococheague River Bridge, 1936. Photo from the Maryland Department of Transportation.

In the 1930s, Maryland’s State Road Commission hired a photography company to document bridge construction projects. Those photos survive and were converted into an interactive map by the Maryland Department of Transportation – and we’ve curated a great tour of some of the most historic and interesting.

The bridges highlighted in this blog were selected because they are eligible for the National Register of Historic Places and are considered a preservation priority by the Maryland Department of Transportation.

This bridge tour will take you across Maryland going east to west starting on the Eastern Shore and the Pocomoke River — these are the only leaf bascule bridges — also known as, draw bridges — on the tour. The next three stops are some of the most unique and rare and take us through central Maryland to Western Maryland. The next three bridges are made of concrete and travel through and near Antietam National Battlefield. We’ll close out with very rare bridges and end with a bridge that showcases the Great Roads Movement. 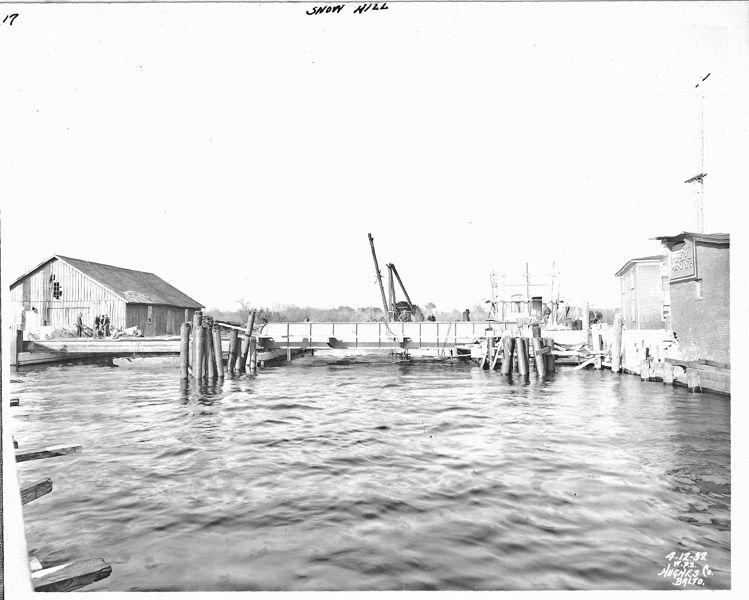 View of the Snow Hill Bridge during construction in the 1930s. Photo from the Maryland Department of Transportation.

Snow Hill Bridge takes MD 12 over the Pocomoke River on the outskirts of Snow Hill. Built in 1932, this 45-foot, concrete single leaf bascule bridge spans the Pocomoke River in Snow Hill. It was one of a group of movable bridges built in the 1920s and 1930s to meet the need of increased highway travel on the Eastern Shore as steamboat transportation decreased. It is one of the few extant movable span bridges from the first third of the 20th century. The bridge was rehabilitated in 1954 and 1990 and remains in service. 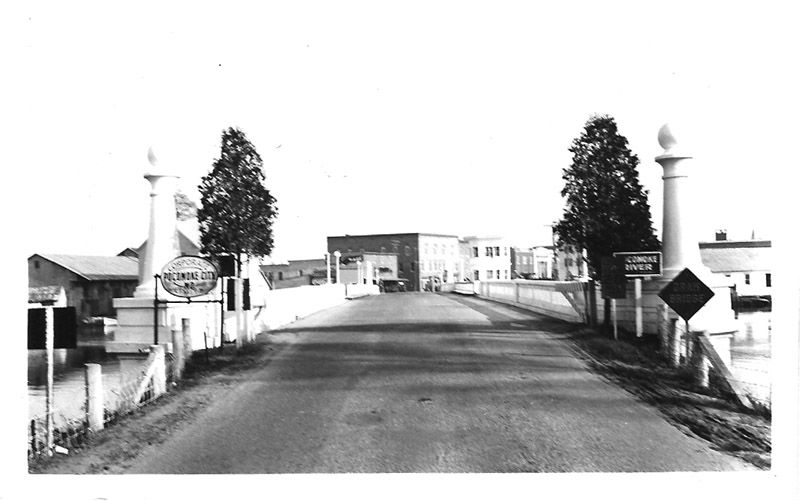 The Old Pocomoke River Bridge (Market Street Bridge) takes MD 675 over the Pocomoke River in Pocomoke City. This 275-foot, double leaf bascule movable span was designed by J.E. Greiner Company and constructed by the McLean Contracting Company in 1920. Much like the Snow Hill Bridge, the Old Pocomoke River Bridge was built to meet the need of increased highway travel on the Eastern Shore in the 1920s and 1930s. In addition, Pocomoke City was a major shipping point, so the bridge aided in continuing to allow the city to have economic importance. The bridge was substantially renovated in 1989 after a 50-foot section of the bridge collapsed into the river. Thanks to an extensive repair and restoration project in 1988, the bridge remains in service. 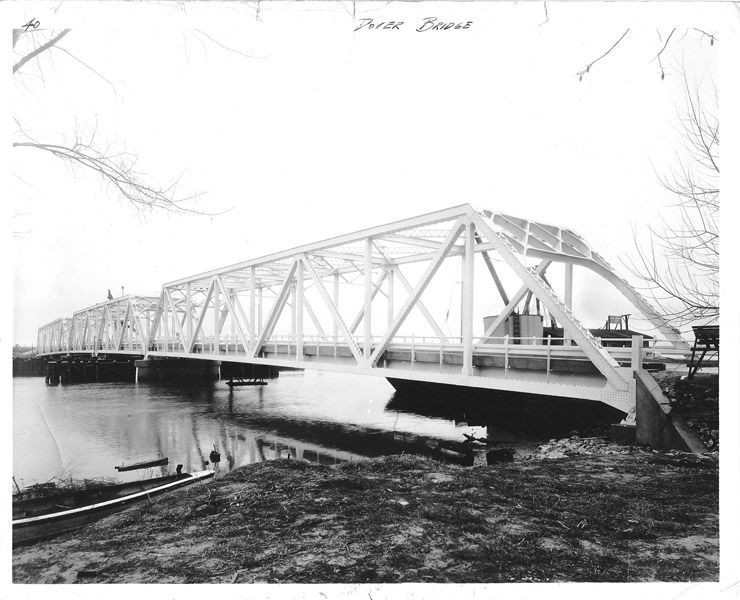 The Dover/Choptank Bridge, 1934. Photo from the Maryland Department of Transportation.

The Dover/Choptank Bridge takes MD 331 over the Choptank River. This 239-foot center-bearing swing span Warren through truss bridge was designed by the J.E. Greiner Company and constructed in 1932. Between 1904 and 1939, the State Roads Commission built at least seventeen swing span bridges over navigable waterways. It is one of the few, if not the only, remaining metal truss swing bridge in Maryland. The bridge is an example of a metal subdivided Warren through truss bridge, which means that the angled vertical members formed equilateral triangles between the top and bottom horizontal chords, with straight vertical members used as well. 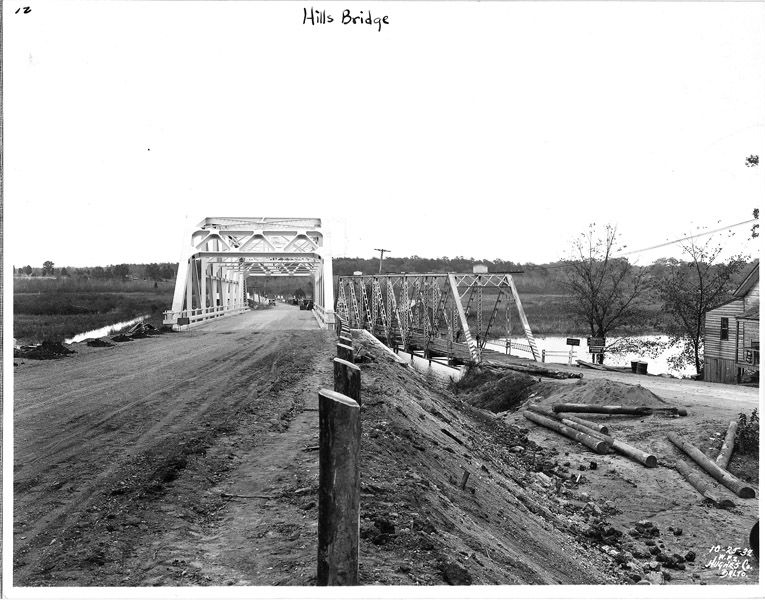 Photo of the Patexent River bridge during construction, 1932. Photo from the Maryland Department of Transportation.

The Patuxent River Bridge (Bridge 2054) carries MD 214 over the Patuxent River. This 200-foot, single-span, steel, Parker through truss bridge is one of Maryland’s most unique structures. The bridge was designed by the Roanoke Iron and Bridge Works and constructed by the State Roads Commission during 1935 as part of the Good Roads Movement. 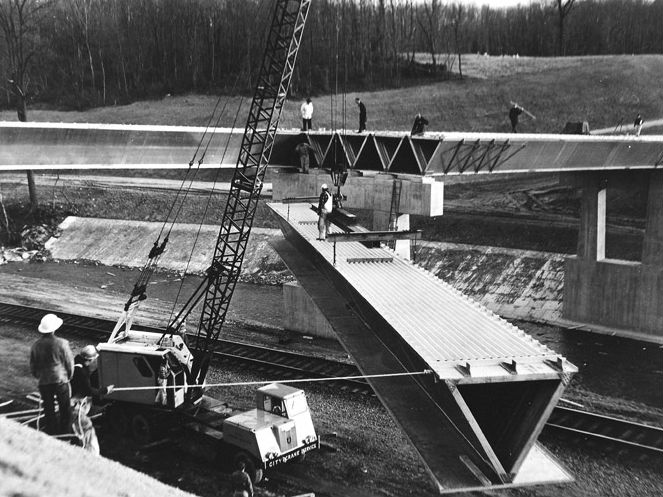 The aluminum Patapsco River Bridge was the first of its kind in Maryland, 1960s. Photo from the Maryland Department of Transportation.

The Patapsco River Bridge takes MD 32 over the Patapsco River, River Road, and the B & O Railroad. The 269.5-foot, three span semi-monocoque aluminum beam bridge was designed and built by the Kinetics Division of the Fairchild Engine and Airplane Corporation in 1963. The Aluminum Bridge is the only of its kind in Maryland and one of seven in the US and Canada. 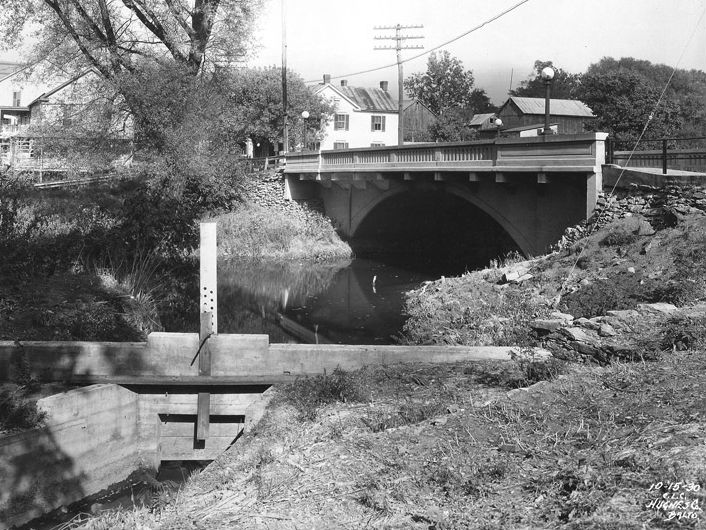 The South Main Street Bridge takes MD 845A over Little Antietam Creek. This 107-foot, closed-spandrel concrete arch bridge was erected by the Luten Bridge Company in 1927 for the State Roads Commission. The elegant open parapet design enhances the visual appeal of the structure. The bridge features a unique design that includes a cantilevered sidewalk, composite open balustrade and closed parapet walls, and integrated lighting. The object in the foreground of the photo is a sluice gate. 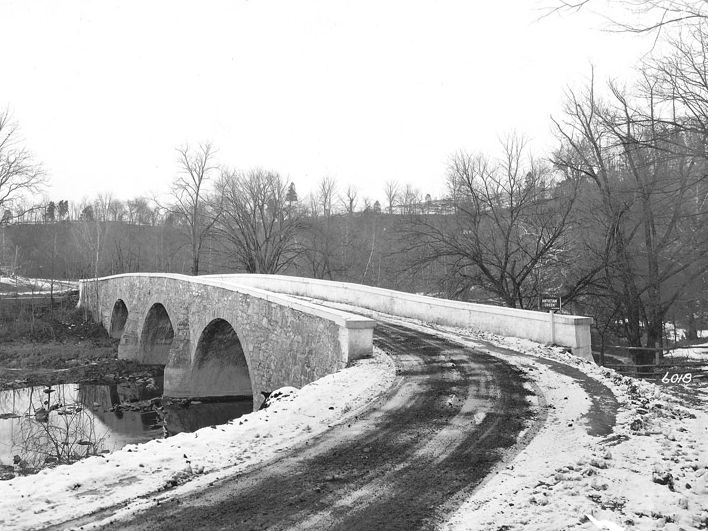 Booth’s Mill Bridge in Washington County, 1938. Photo from the Maryland Department of Transportation.

Booth’s Mill Bridge, also known as Devil’s Backbone Bridge or Delemere Bridge, takes MD 68 over Antietam Creek. This 100-foot, three arch limestone bridge was built by Charles Wilson in 1833 for Washington County to facilitate travel to and from the mill. It is a three segmental arch stone bridge carrying MD 68 across Antietam Creek. The two bullnose piers at between the arches serve both to buttress the structure and prevent debris from damaging the bridge.

The Conococheague River Bridge, 1936. Photo from the Maryland Department of Transportation.

The Conococheague River Bridge takes US 40 over the Conococheague River. This 370-foot, triple-span open spandrel arch concrete bridge was constructed in 1936. The bridge was built as part of the relocation and widening of US 40 between Frederick and Cumberland in the 1930s. The columns and horizontal struts used to strengthen the design give the bridge a lighter appearance. The store in the distance remains standing and is currently a private residence. 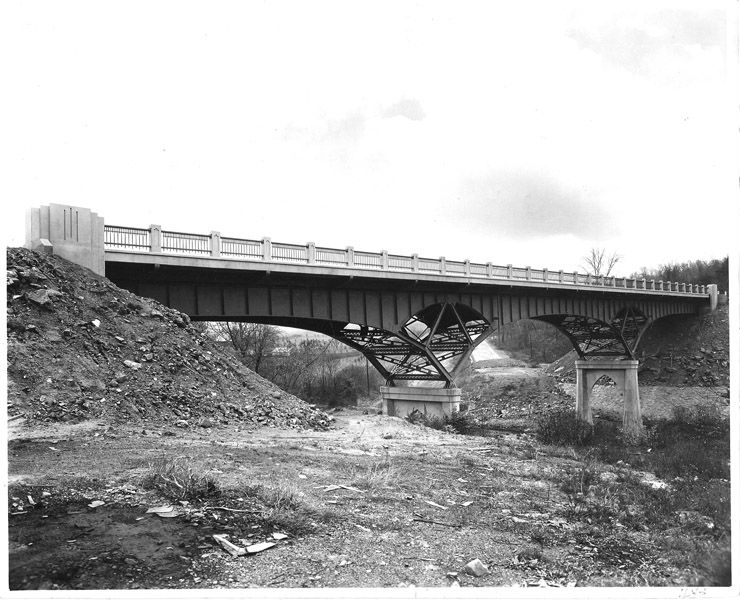 Licking Creek Bridge, 1938. Photo from the Maryland Department of Transportation.

The Licking Creek Bridge takes US 40 over Licking Creek. This 300-foot, triple span truss and plate girder bridge was erected in 1938 by the State Roads Commission. This bridge utilizes an early example of the Wichert deck truss developed by E.M. Wichert just eight years earlier. This view of the underside of the bridge showcases the innovative Wichert cantilevered deck truss. This type of truss design is called cantilevered because of it relies on diagonal rather than vertical bracing. The telltale mark of a Wichert Truss bridge is the open diamond shape created by the diagonal members above the piers. The C & O Canal Bridge takes MD 51 over the Chesapeake & Ohio Canal. This 89-foot, single span, steel Warren Camelback Pony truss was designed by the Roanoke Iron and Bridge Works and constructed by the State Roads Commission in 1932. The bridge is unusual because of the use of the Pony truss, which is very rare in the state of Maryland, less than twenty percent of all the metal truss bridges that were ever built in the state were Pony trusses. Pony trusses lack the full height walls and horizontal bracing that are characteristic of through truss bridges. A narrow black stripe in the center of the road separates the two lanes. The shoulders at either side of the bridge are gravel rather than finished concrete. 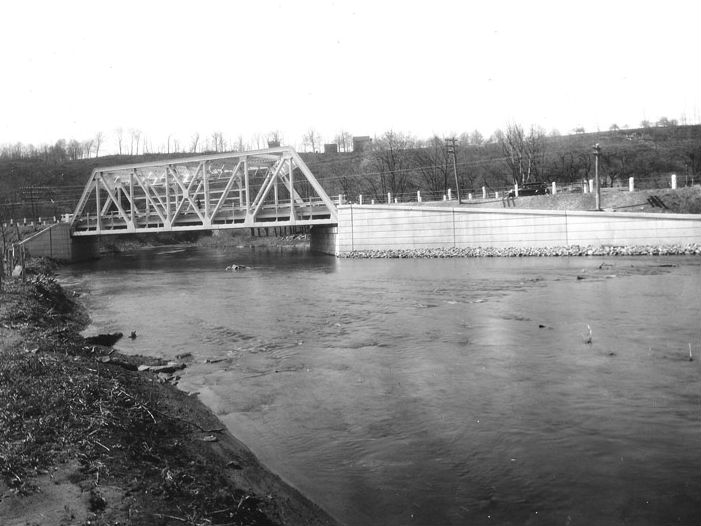 New Casselman River Bridge was completed in 1932. Photo from the Maryland Department of Transportation.

The New Casselman River Bridge takes US 40 Alternate over the Casselman River. This 133-foot, Pratt through truss bridge was erected in 1932 by the State Roads Commission as part of the Good Roads Movement. The bridge provides a dramatic counterpoint to a stone arch bridge located a few hundred feet away, which was constructed in 1813 and was the predecessor to the new bridge. The bridge is a Pratt through truss design with concrete wingwalls and abutments. Construction was completed in 1932.

More About the Collection

During the 1930s, the State Roads Commission hired Hughes Photography Company to document bridge construction projects throughout the state of Maryland. The Maryland State Highway Administration’s collection consists of approximately 2,300 photographs of 367 bridge locations throughout the state. Collectively, the images provide a documentary record of construction methods and equipment between 1929 and 1940. Primarily taken with a medium format camera, each photo contains detailed visual information about the subject bridge and the surrounding community at a specific moment in time. Many offer rare glimpses of nineteenth century bridges that were demolished shortly after the photos were taken. Others convey the appearance of bridges prior to more recent rehabilitation projects.

Explore the Bridges of Washington County

This post was written by Ross Bater, one of Preservation Maryland’s Waxter Interns. Ross’s work with us focuses on researching best practices and resources for preservation in rural Maryland. He is a recent history graduate University of Maryland, Baltimore County. Learn more about Ross and our intern program here: presmd.org/waxter.