Maryland’s Historic Tax Credits are Most Effective Tool for Revitalization

Preservation Maryland attended the announcement of the recipients of the Heritage Structure Rehabilitation Competitive Commercial Tax Credit for 2017. These were the first projects to be awarded the tax credit since the reauthorization of the program last session due to positive community support and advocacy led by Preservation Maryland.

At the announcement Lt. Governor Boyd Rutherford spoke to the power of the historic tax credit in Maryland’s local economies: 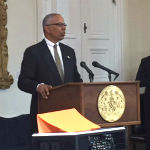 “This tax credit is one part of our efforts to change Maryland for the better by the revitalization and repurposing of empty buildings into active, vibrant sites for new businesses. The Historic Structure Rehabilitation Tax Credit is one of the most effective investment tools for strengthening Maryland’s local economies. When we revitalize historic sites, we create jobs for more Marylanders across our state. We give new life to important parts of our past that provide opportunities for economic growth into the future.”

Impact of the Program

The Heritage Structure Rehabilitation Tax Credit and its predecessor program, administered by the Maryland Historical Trust, an agency of the Maryland Department of Planning, has invested more than $382 million in Maryland revitalization projects since it began in 1996. The investments have helped restore more than 4,381 homeowners and 657 commercial historic structures, preserving buildings that contribute to the distinct character of Maryland’s towns, cities, and rural areas. According to a study by the Abell Foundation, this Maryland program is estimated to have helped to create 27,745 jobs through construction and new uses of these significant historic resources.

Constructed in 1917, the building was originally used as a school for the Saint Peter the Apostle Roman Catholic Church. Around 1970 the school was closed and the property transitioned to senior housing with its most recent use as a residential health treatment center ending in 2012. The rehabilitation of this building will create workforce housing targeting employees of Bon Secours Hospital and the University of Maryland, Baltimore.

Constructed in the 1920’s by Milbourne Bramble and used for a brief time as the Cambridge Furniture Company, this factory complex was acquired by the Phillips Packing Company in 1930. Under Phillips’s ownership this complex was one of Cambridge’s largest factories and focused on the canning of tomatoes. Its success led to Cambridge being known as the “tomato canning capital of the world”. The company was also the largest producer of “c-rations” in the nation during World War I and World War II. The rehabilitation of this property will create a “Food and Farming Exchange” housing a range of food-related uses featuring a brewery and brew pub, kitchen business incubator, an oyster bar and collaborative office space.

Home of the Friendless
Baltimore City

The Home of the Friendless was constructed in the Second Empire style in 1870 to provide a home for orphaned and deserted children. The building continued to be used as an orphanage for 60 years, where as part of a three building complex it served between 100 and 200 children at a time. By 1922 the institution moved out and the building served as a health center and then part of the Baltimore City Department of Housing. The building, listed on the National Register of Historic Places, has since suffered from significant neglect and fire damage. The proposed renovations will convert this endangered site to residential live/work spaces for artists.

Constructed in 1937 this six story Art Deco landmark features remarkably intact storefront, interior floorplans and facades comprised of soaring crenelated pilasters framing cast-concrete decorative panels and original metal windows. This project will rehabilitate the historic plan and design of the building which will once again serve as an office building with first floor retail/commercial space.

This National Historic Landmark building, the Peale Museum, was created under the direction of painters Charles Willson Peale and his son Rembrandt Peale in 1814 to serve as the Municipal City Museum. This structure is believed to be the first purpose-built museum building in America. By 1830 the building had been repurposed to house the Baltimore City Hall and then in 1875 converted to a public school as the Number 1 Colored Primary School. By 1931 the building was in need of significant repairs and was once again renovated to serve as a museum and served as such until being closed in 1997. The proposed renovations will restore the building for use as the Peale Center for Baltimore History & Architecture.

Constructed in 1887 to serve as the works for the Baltimore branch of the nation’s largest tinware manufacturer, this complex produced a variety of tin products including decorative enameled and japanned wares. Since 1952 the property has largely been used for storage. The proposed renovations will convert this former industrial complex into rental residential use while providing unique housing opportunities through a partnership with the National Federation of the Blind to produce innovative designed units and amenities that address the needs of the visually impaired.

This two-story stucco building was constructed in 1928 to serve as a physician’s office as well as residence above. Evidence of the use can be easily seen in the prominent use of three separate entrance doors with one leading to the main office with private stairs to the doctor’s residence and two additional entrances each leading to separate waiting rooms for patients that were segregated by race under Jim Crow practices of the time. This property has suffered from neglect and requires extensive renovations. The proposed project will provide a mixed residential and office use.

This unique structure was built in 1909 in the Tudor Revival style and features the use of fireproof design inclusive of masonry and steel construction with decorative concrete formed half-timbering. Design9ed as a mixed-use structure the property originally housed an early car dealership/repair facility on the lower floors with a ballroom dancing school on the upper floor. From 1941 to 1992 the building hosted a series of restaurants and nightclubs first for white audiences as the Celebrity Lounge and latter catering to black audiences as Odell’s, considered the birthplace of Baltimore Club Music. The renovated building is intended to house performance spaces that will contribute to the artistic focus of other rehabilitation projects in the North Avenue corridor.