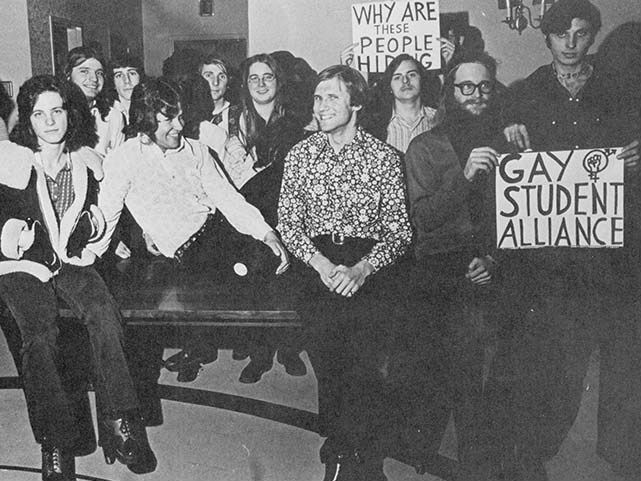 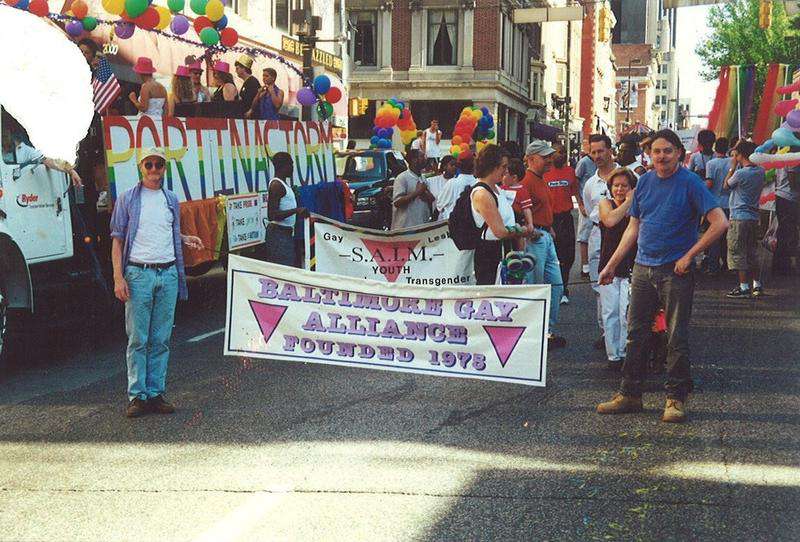 The Baltimore Gay Alliance was the city’s first Gay and Lesbian (later LGBTQ+) activist and service group founded in 1975. 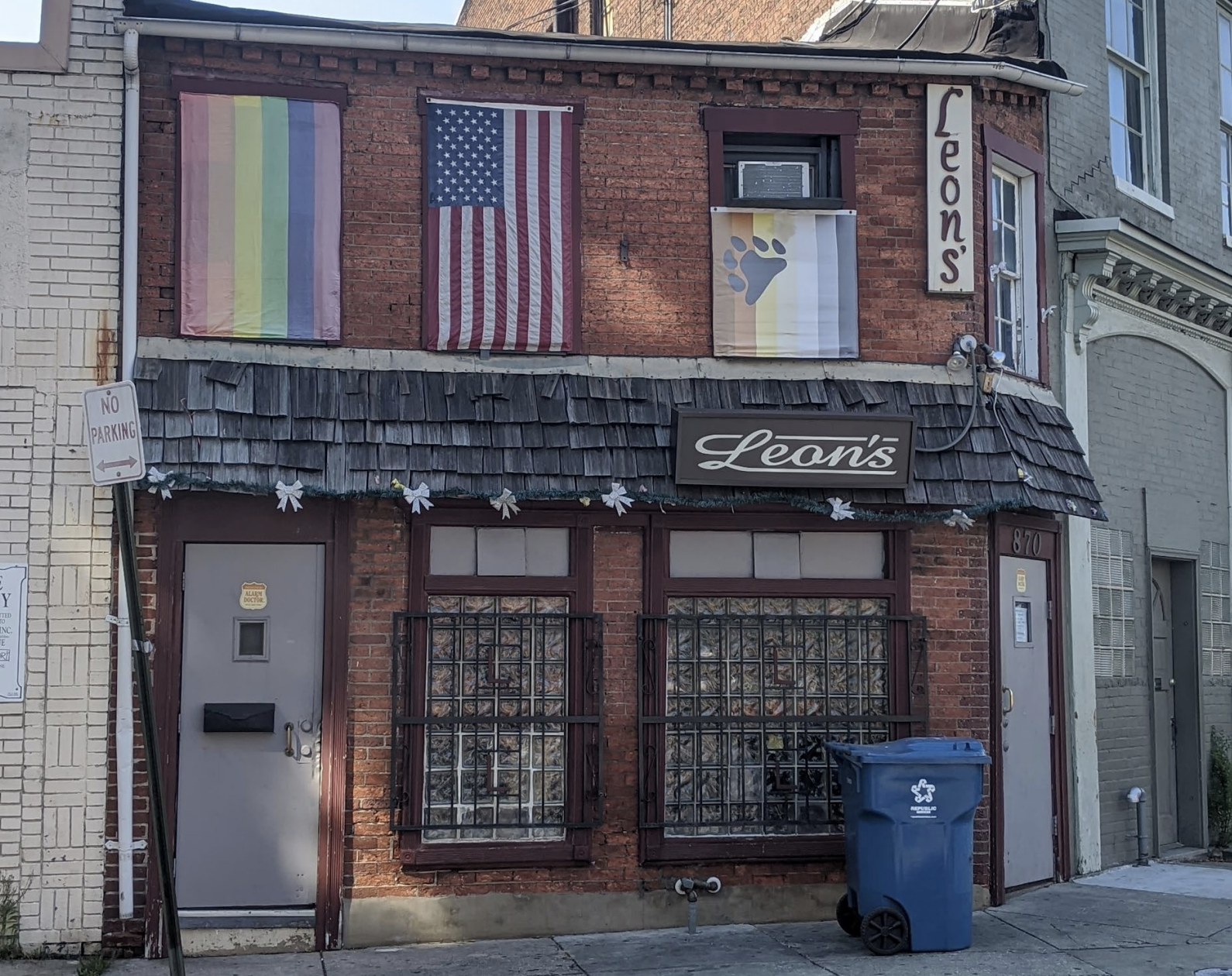 Leon’s, 870 Park Ave in Baltimore Maryland is the oldest continually operating gay bar in Baltimore; it has been a gay bar since 1957.

The 100-page document and property database of nearly 400 sites important to LGBTQ+ life in each of Maryland’s counties are now part of the historic record. The report illuminates Maryland LGBTQ+ history in rural, suburban, and urban locations, including sites associated with non-binary historical figures, leading “out” elected officials, strong community groups and popular gay bars, advocacy for AIDS treatment and marriage equality, and many other important sites. The Context Study is a milestone in Preservation Maryland’s multi-year commitment to LGBTQ+ heritage visibility and diversification of the historic record.

Maryland is only the second state to conduct such comprehensive LGBTQ+ history; Kentucky being the first. The 100-page document and property database of nearly 400 sites important to LGBTQ+ life in each of Maryland’s counties are now part of the historic record – and is being abridged for a forthcoming illustrated booklet and resource guide. The context study was funded in part by the Maryland Historical Trust’s Historic Preservation Non-Capital Grant Program as well as Preservation Maryland’s Waxter Memorial Internship Program and the Heritage Fund, a cooperative effort of Preservation Maryland and the Maryland Historical Trust.

Screenshot of the LGBTQ+ Maryland collection on HistoryPin, 2019.

The LGBTQ+ Maryland collection is available on the National Park Service’s LGBTQ+ America map hosted on HistoryPin. The pins on the map are sourced from a researched spreadsheet of sites associated with LGBTQ+ people and communities in Maryland that span the 17th century to the present. This collection has just shy of 300 items reflecting the places where LGBTQ+ people lived, gathered, and advocated for themselves and each other. From the home of Salisbury’s first gay mayor to a historic manor house that was the site of an AIDS hospice, to the filming locations from John Waters’ Hairspray, the list is varied and hopefully helps people understand more about how LGBTQ+ history and heritage fit into the physical spaces around them.

Preservation Maryland’s collection and project is collaborative. Individuals can create accounts on HistoryPin in order to add content to existing sites or add sites of their own. Additionally, if you have documents or physical items that you would like to donate; the Maryland Historical Society has an LGBTQ+ collection as do many local libraries and archives. For those interested in doing their own research, there are several important collections in Maryland. The GLCCB (now The Pride Center of Maryland) archives are at the University of Baltimore and there is microfilm of local LGBTQ+ newspapers at the Enoch Pratt Free Library.

As hoped, the Historic Context Study also spurred local efforts to research and preserve specific properties – including two homes in Montgomery County associated with prominent LGBTQ+ Marylanders. Montgomery History invited members of the project team to host and record a live panel discussion focused on the importance of Montgomery County in Maryland LGBTQ+ history. Moreover, as a known haven for the Maryland LGBTQ+ community, panelists also spoke about the importance of bringing this history into current conversations about planning in Montgomery County, which is currently working on an update to its comprehensive plan.

The discussion took place the evening of October 7, 2021 via Zoom and Facebook Live and was well-attended by over 80 viewers – many of whom contributed greatly to the conversation with their comments and questions.

A Place to Start: A Toolkit for Documenting LGBTQ Heritage in Baltimore City (And Beyond)
University of Maryland, HISP600

Writing and research for this post by Benjamin Egerman who recently completed a Master’s of Library Science from the University of Maryland, College Park. During his internship with Preservation Maryland, Benjamin has focused on researching and documenting LGBTQ heritage. He is interested in exploring the ways history can be used to inspire and assist LGBTQ+ communities and people today – and has long been an activist archivist. In his free time, he enjoys watching bad movies, reading good books, and finding weird stuff on the internet. Learn more about our Waxter Internship Program.

Writing and research for this post by Meagan Baco, who leads the Anacostia Trails State Heritage Area as Executive Director. Meagan is an inaugural fellow of the ARCUS Preservation Leadership program and has completed the Baltimore Planning Academy. Previously, Meagan has held positions at Preservation Action and Clinton Brown Company Architecture. They earned an M.S. in Historic Preservation from Clemson University and the College of Charleston, and a B.A. in Environmental Design from SUNY Buffalo. Meagan lives in Baltimore with their partner and a growing collection of LEGO mini-figs and house plants.