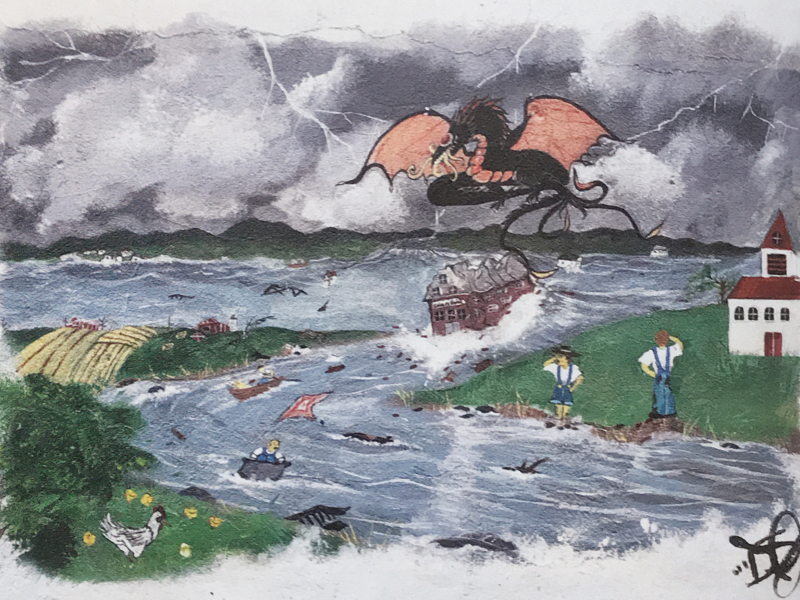 Mural of the snallygaster by Dominic Jones in Sykesville, 2018.

Reports of the Snallygaster, a strange beast prowling the woods of Frederick County, have been made since the 1730s, making it one of Maryland’s oldest legends.

18th-century accounts by the early German settlers refer to the beast as a Schneller Geist or quick ghost that rapidly pounced upon its unsuspecting prey. More accounts and reports of the beast continued throughout the 19th and early 20th centuries. 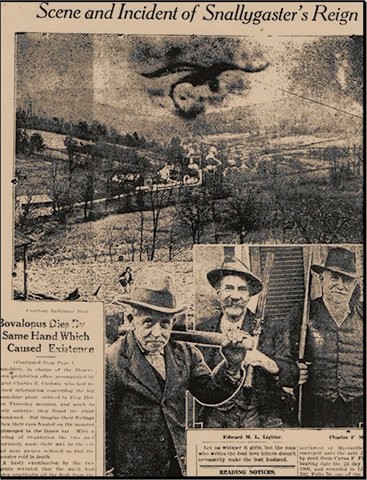 The 1909 siting article that ran in the Middletown Valley Register newspaper.

Then on February 12, 1909, the Middletown Valley Register published a letter from T.C. Harbaugh of Casstown, Ohio who spotted a “gigantic monster” which he claimed was on the loose and headed towards Maryland. Reports of sightings and encounters from wary citizens quickly flooded newspapers throughout western Maryland. Even more terrifying, other reports suggested it had laid an egg at Crampton’s Gap near Burkittsville – perhaps laying the basis for even more Snallygasters.

Sightings continued for many years, including a chance encounter in 1923 with Middletown resident Charles Main, owner of Main’s Ice Cream, who reported to a Cumberland newspaper that, “its wing spread appeared to be between 12 and 14 feet. At times, he said, it threw out long streamers like the arms of an octopus, but would draw them in again.”

Then, in December 1932, the Hagerstown Morning Herald reported on the death of the Snallygaster. It was purportedly lured to a moonshine still in Frog Hollow in Washington County and was overcome by the noxious fumes and drowned in the alcoholic vat. 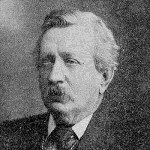 Where did all of this Snallygaster furor and interest come from?

Some have suggested that the accounts beginning in 1909 were a veiled attempt at scaring away would be ne’er-do-wells from Middletown and the surrounding region. Others have explained that the original letter from T.C. Harbaugh is the explanation – as Thomas Chalmers Harbaugh was a native of Middletown and an accomplished author with a passion for the area’s history and culture. Perhaps he was looking for an excuse to pen a good story and give the valley some intrigue.

Or, perhaps it’s all true and there’s another snally egg in the blue hills just waiting to hatch…

A History of the Middletown Valley