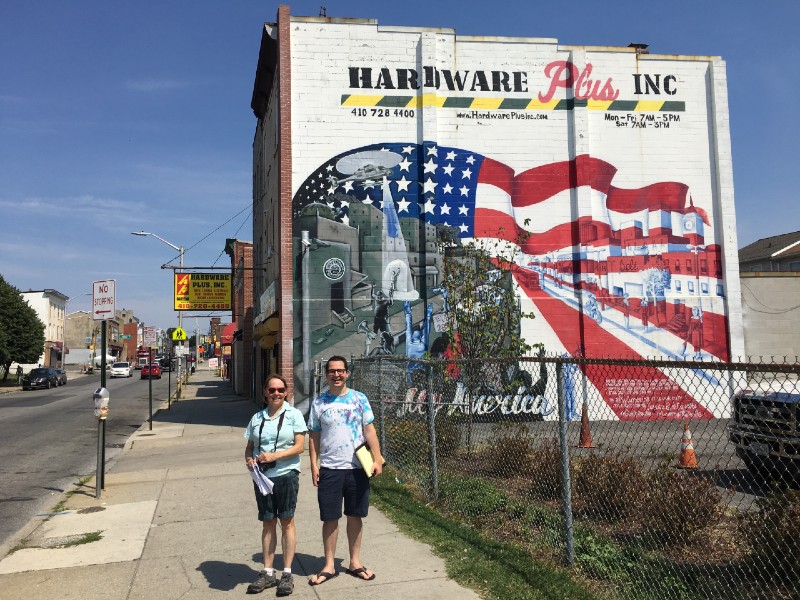 The Green Book was created as a guide by and for African Americans to safely find everyday amenities like restaurants, stores, pharmacies, and motels in a time of intense segregation across America. Researching Green Book sites documents the physical legacy of Jim Crow-era segregation and has found over 100 Green Book sites in 26 towns across Maryland.

To recognize and highlight this era of Maryland’s history, Preservation Maryland will release a five-part blog series about Green Book sites in Maryland adapted from the research of Anne Bruder. Anne Bruder is a Senior Architectural Historian with the Maryland Department of Transportation State Highway Administration, with a specialty and interest in 20th-century social history and development patterns. This summer, Preservation Maryland’s Director of Communications, Meagan Baco, and Waxter Intern, Anthony Plaag, met up with Anne for a tour of Green Book sites in Baltimore and a brief interview with Anne about her research.

[ANTHONY PLAAG] So Anne, for those who are unaware, can you tell me what was the Green Book? 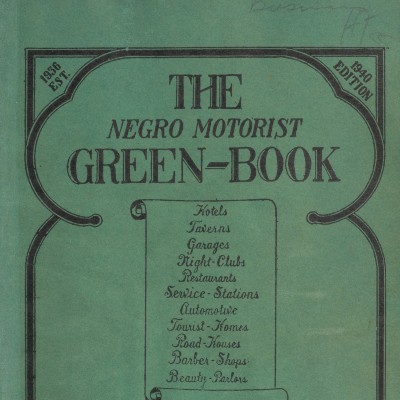 [ANNE BRUDER] The Green Book was a travel guide used by Blacks between 1937 and 1967 that listed travel-related businesses (YMCA/YWCA locations, hotels/motels, drug stores, golf courses, resorts/beaches, restaurants/bars/night clubs, beauty salons/barber shops, among other places). The listings weren’t necessarily leisure sites but would provide a place to go if you needed assistance if your car broke down, or you had been delayed and needed a place to spend the night.

[AP] How did places get listed in the Green Book?

[AB] Victor and Alma Green started the Green Book in 1936 in response to a need that they had observed among Black travelers who were in unfamiliar territory and needed to know they could enter a business and be served…whether it was a hotel, restaurant or even a gas station. The Greens had no specific criteria except that it was a travel-related site that would assist a traveler. We think there were three ways to get listed – Victor Green was a letter carrier, and he is said to have relied on fellow carrier to recommend sites, also travelers, especially musicians and baseball players, would visit a town and find a business and make a recommendation, the business owners knew about the Green Book and would write to the Greens to ask for a listing. It’s also possible that it was an activity by a local branch of the NAACP since Civil Rights was an issue, especially after WWII. I haven’t found any evidence for this last one, although I’ve asked the question and would love any leads. I found an article that stated Victor visited every town he listed so that he knew the businesses, now that’s a lot of travel!

[AP] Wow! That certainly does sound like a lot of travel. How many Green Book sites are there in Maryland?

[AP] Every historian has their interests and motives. With this in mind, what made you want to conduct research on Green Book sites in Maryland?

I’m interested in Maryland’s 20th Century history, particularly suburbanization. I’ve been involved in studies about the mid-20th century since 1997 while I worked either at the Maryland Historical Trust or at the State Highway Administration. In 2013, I did research and presented a paper about the 1963 Civil Rights protest at Belair and the William Levitt residential development in Bowie. Levitt refused to sell houses to two Black men who worked for the federal government (one at the Office of Management and Budget and another at the Food & Drug Administration). So the Congress of Racial Equality (CORE) staged five months of protests at the Belair sales office and model homes.

Also, my book club read “The Warmth of Other Suns” by Isabelle Wilkerson, a piece a fiction that followed a doctor’s travel from Louisiana to California using the Green Book. That made me wonder what buildings were in Maryland and a year later, my friend, Catherine Zipf, an architectural historian in Bristol, Rhode Island, wrote an article about a beauty salon on Benefit Street in Providence that had been listed in the Green Book. She posted the article to Facebook, I saw it and we talked about doing a poster for each state about Green Book buildings and displaying them at a conference! We thought initially the Vernacular Architecture Forum (VAF) but they didn’t have a poster session that year. Then the Southeast Chapter of the Society of Architectural Historians (SESAH) announced a poster session for their October 2016 conference and Catherine took five posters there (we found people in North Carolina and Mississippi who were working on Green Book sites and were willing to put the information together for a poster). The final poster was the overview poster of all the Travel Guides from 1932 through 1967. 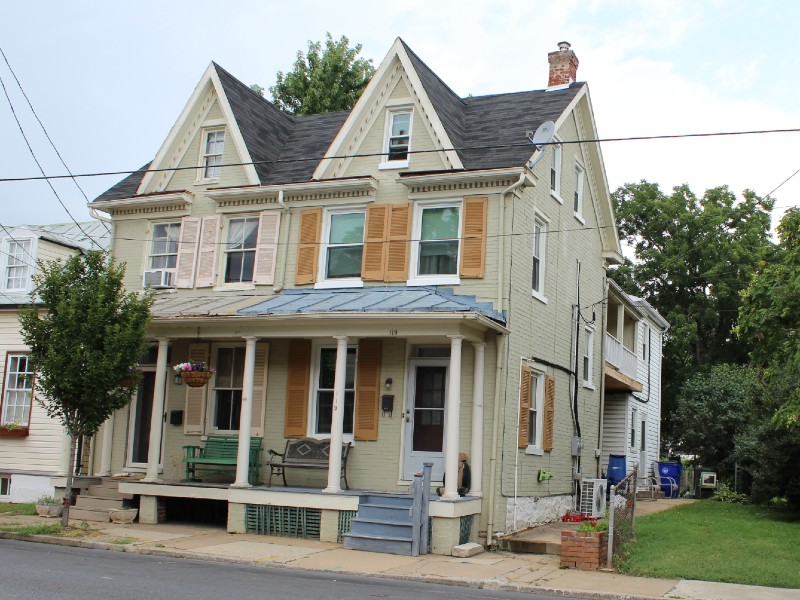 [AP] What is being done to preserve the history and their corresponding locations?

[AB] There is no single group or movement to preserve the sites or the history per se. At the local level, groups such as the African American Heritage Society of Frederick County and the African-American Heritage Society of Charles County are active in preserving their history through brochures, talks, and tours. Also, the state heritage areas, Anacostia Trails Heritage Area in Prince George’s County and the Four Rivers Heritage Area in Anne Arundel County got National Park Service grants to study civil rights sites in the 2 counties, and they are putting together story maps to provide guides for tours and other historic information. You all at Preservation Maryland, along with the Maryland Historical Trust are two statewide agencies that also have an interest in my project, and have been very encouraging.

[AB] I have put together the lat/longs for each site and that can be used by a mapping program such as ArcGIS or Google Maps to create a map. I prefer to use ArcGIS since I think it gives a better visual product, but there’s a cost involved and I have not gotten to it yet.

[AP] Is there anything that makes Maryland unique in its relationship to the Green Book when compared to other states? Are there any themes?

[AB] I came to the study and brought my transportation background. Since the Green Book is about travel, the nearby highways seemed like a natural theme. But many of the sites are not vacation destinations or particularly family-friendly so it’s less about the family vacation and more about people moving through Maryland. Also, Maryland had a reputation for being hostile to Black travelers. Most notably, in 1962, President John Kennedy was repeatedly embarrassed when ambassadors and other diplomats from newly established African nations were refused service along US40 in northeast Maryland. A useful article is found at “The Junction: The Cold War, Civil Rights, and the African Diplomats of Maryland’s Route 40” by Nicholas Murray Vachon, an academic paper published by Indiana University.

[AP] What do you find to be the most important thing to realize when studying the history of Green Book sites?

[AB] That people were fighting for their civil rights long before Rosa Parks refused to give up her seat in Birmingham, or the Supreme Court ruled in favor of Brown in Brown vs. the Board of Education of Topeka. It’s also about recognizing that it isn’t just Thurgood Marshall or Lillie Maye Jackson that made important contributions – they stood on the shoulders of people who supported them and were willing to help fight for civil rights.

[AP] What was the most challenging part of your research?

[AB] Finding people to talk to and finding past images of buildings – many are gone.

[AP] What further research needs to be done on these sites?

[AB] There are several sites on the Eastern Shore that don’t have actual physical addresses listed in the Green Book– it just reads Rural Route West of Chestertown, or no address but somewhere in the Hurlock vicinity. I’m also looking for more information about a country club in Westminster. People don’t always know about the history because some sites were only used for a short period and so it may be lost.

[AP] Where can individuals go if they want to find more information about Green Book Sites in Maryland?

[AB] Please stand by! I’m working with Catherine Zipf in Rhode Island and Susan Hellman in Virginia to create a website at the University of Virginia’s Institute for the Advancement of Technology in the Humanities and hope to have a website up and running soon. Otherwise, I’m happy to give talks about my research and see if that will help with some information I need.

[AP] How can others contribute to the preservation and memory of these sites?

[AB] I read in The Baltimore Sun the other day about Pennsylvania Avenue being designated an Arts & Entertainment District. I think that many remaining Green Book sites can survive if we can find a purpose for them. Hopefully, this new designation will help. And I’m always happy to help work on a story map or e-brochure about the buildings so that Pennsylvania Avenue’s history could be better understood and appreciated. 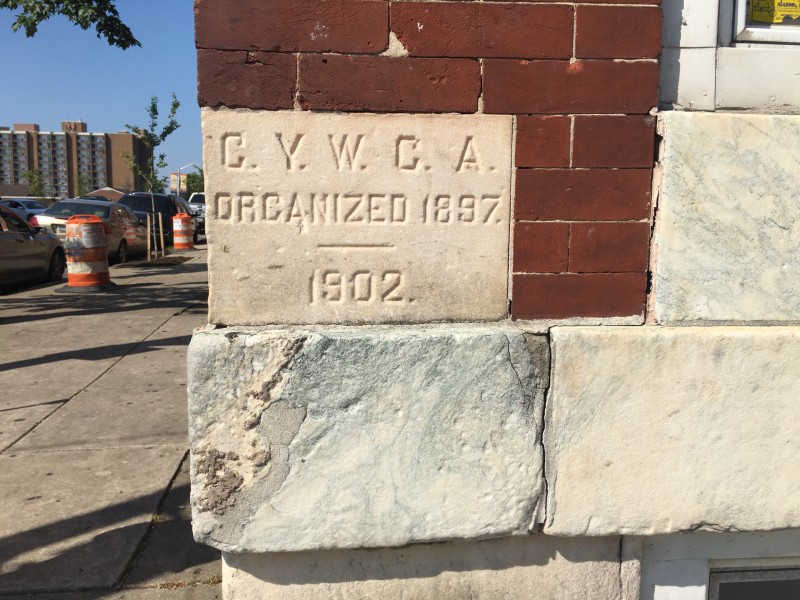 Cornerstone of the CYWCA on Druid Hill in Baltimore, MD, 2019.

Preservation Maryland is pleased to share Anne Bruder’s work through a five-part blog series adapted from her research with additional research by Anthony Plaag, Waxter Intern. We choose to show a range of uses, building types, and geographic locations known to have been included in the Green Book. To contact Preservation Maryland and get in touch with Anne Bruder, please email: info@presmd.org. This interview was conducted by Anthony Plaag, a Preservation Maryland Waxter Intern during the Summer of 2019. Anthony is a Public History scholar at Stevenson University. Learn more about the Waxter Memorial Internship program at: presmd.org/waxter.

Sign up for More Maryland history in your Inbox