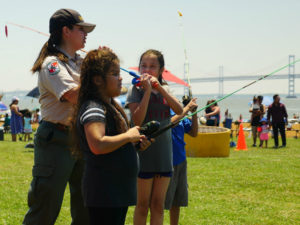 Did you know? Visitors of Hispanic descent are one of the fastest-growing and biggest user groups to Maryland’s state parks. The Maryland Department of Natural Resources and other agencies like the Chesapeake Conservancy are creating new connections between Maryland’s Latinx communities and the state’s historic and natural resources. 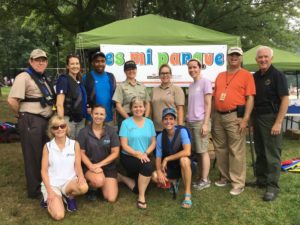 The Es Mi Parque program posts Spanish-speaking Rangers at some of the most utilized public parks and also hosts educational programming and outreach activities. 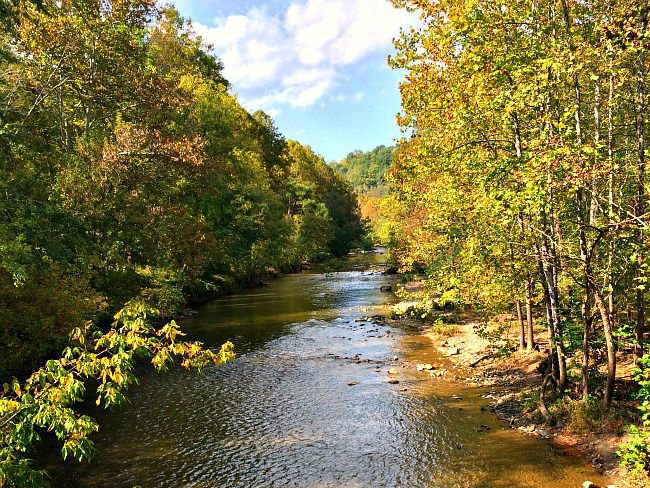 Maryland State Parks has created their Es Mi Parque program to better connect a large and growing number of Latino visitors to the cultural, recreational and historic resources of Maryland. In partnership, Preservation Maryland will produce a series of brief park histories in English and Spanish, including Catoctin Furnace at Cunningham Falls State Park and the following history of Patapsco Valley State Park.

Patapsco Valley State Park: A History of the River, Giving and Taking

Patapsco Valley State Park, once called Patapsco Forest Reserve, was Maryland’s first state park. It was founded in 1907 with an original gift of 43 acres from John M. Glenn to the state of Maryland. The Park has expanded greatly since then to include more than 16,000 acres in four Maryland counties that touch upon the Patapsco River and its valley. Because of this location, the history of the Patapsco Valley is closely tied to the natural resources and bounty of the river and its surroundings, but also to the periodic destruction caused by flooding. The Valley and the Park both hold much history and many firsts in history too.

In the 1600s, long before the land of the Patapsco Valley State Park was bought and sold by European settlers, it was an essential part of the lives of the Piscataway and Susquehannock peoples as they hunted and fished the area for its plentiful game. As European settlers arrived to the area, their communities were forever changed due to war and disease and their populations dwindled as the European settlers increased in number. Some remaining original peoples were absorbed into groups elsewhere and some of the Piscataway remained near Zekiah Swamp Reservation in southern Maryland.

In 1608, Captain John Smith mapped the Chesapeake Bay and some of its rivers, including parts of the Patapsco River, with stunning detail. He discovered iron ore and limestone along the river and wrote of the area’s natural resources and beauty, which attracted colonists to the area. There is a stone marker in Patapsco Valley State Park along the Captain John Smith Chesapeake National Historic Trail, which follows the path of Smith and his crew through their early documentation of much of the Northeast. 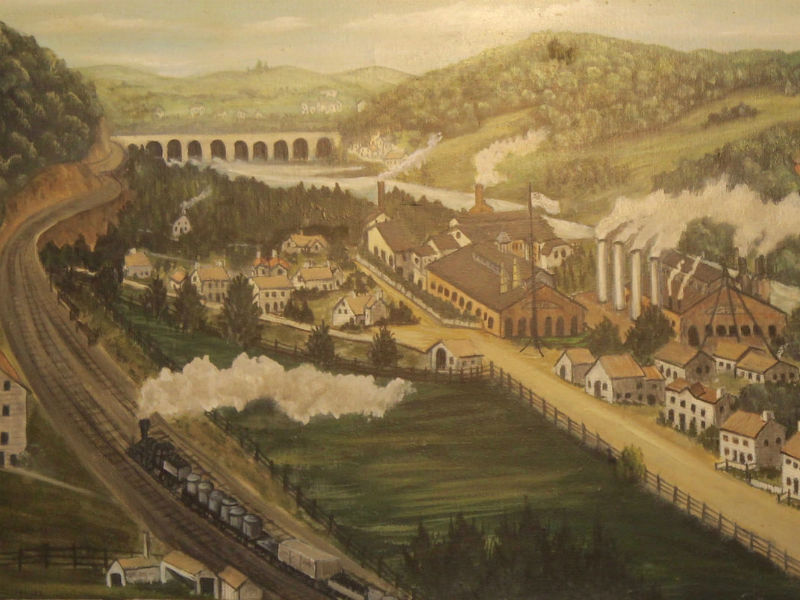 After European settlers established their footings in the Patapsco River Valley, Elkridge Landing Harbor became an important port for their economies, similar to Annapolis. The Harbor was established in 1690 and was large and deep enough to hold oceangoing ships full of tobacco, flour, textiles, and iron destined for England.

A little farther upstream was a community known as Avalon that was home to the Avalon Nail and Iron Works. The Avalon Nail and Iron Works was originally the Dorsey Forge until it was acquired and expanded by the Ellicott family in 1815. Previously, guns from the Dorsey Forge were moved across the Old Gun Road Bridge to Elkridge Landing, where they were shipped to Annapolis. George Washington supposedly created the road to move iron and guns for the American Revolution. The Old Gun Road Bridge can still be seen in the Avalon area of the State Park today.

With the commercial success of the area came a depletion of natural resources to fuel that economy. The iron forges were fueled by clearing much of the surrounding forest to create and burn charcoal. Forests were also cleared for the tobacco industry. With few trees and roots in place, erosion washed silt downriver, filling the Elkridge Landing Harbor and making it too shallow for large ships. Elkridge Landing and Avalon both met their ends when the Great Flood of 1868 caused waters to rise 45 feet higher than normal and washed away most of the infrastructure. Only remnants of the Harbor and Avalon remain. The Elkridge Furnace Inn, a restaurant and event space, can be visited just off Route One. The only Avalon house to survive the flood is now the Park’s Visitor Center.

The area of the park donated by John M. Glenn is known as the Hilton area and was once a plantation. The original historic house was built in 1825 for James W. McCulloh and was subsequently passed through several private owners. Robert E. Lee visited the original structure several times when Lee supervised the construction of Fort Carroll in the mid-1800s. The main part of the historic property with the house was purchased by George Worth Knapp in 1917 and was reconstructed by Baltimore architect Edward L. Palmer.

In 1963, the Baltimore County Board of Education bought the central part of the Hilton Estate, which was made into the Community College of Baltimore County-Catonsville Branch. The historic house can still be seen today as the College’s administration building. Much of the rest of the surrounding acreage has been developed for housing.

The area that is now Patapsco Valley State Park played an important role in the development of the railroad system in the United States. The Baltimore & Ohio (B&O) Railroad was the first commercial railroad in not only Maryland, but the whole United States.

An impressive example of railroad infrastructure is the Thomas Viaduct located in the State Park. Thomas Viaduct is the oldest railway bridge in the world that is made of stone with multiple arches and on a curve and at the time of its completion in 1835 was the largest railroad bridge in the United States. It was designated as a National Historic Landmark in 1964 for its history, design, and engineering.

The Thomas Viaduct was designed by Benjamin Latrobe with eight arches and a curved shape crossing the Patapsco River. The Thomas Viaduct’s design caused people to doubt its sturdiness, however it has withstood the passing of time, including the Great Flood in 1868 and Tropical Storm Agnes in 1972. In 1844 the viaduct was even used for Samuel Morse’s experimental telegraph line connecting Washington, DC and Baltimore, Maryland. The Thomas Viaduct has been used for transportation and communication for almost two centuries and is still used by CSX today.

Other unique historic remnants in the State Park are at the Orange Grove area where there is a rebuilt swinging bridge and remains of the Orange Grove Flour Mill. The Mill was constructed in 1856 and was the largest flour mill in the South. It used water from the river for power and then used the B&O Railroad for shipment and sale of flour. Workers at the Mill lived in a town on the Howard County side of the river and used a swinging bridge to get to work each day. The town and bridge were washed away in the Great Flood of 1868 and the mill was damaged. The mill reopened, but it later closed and was destroyed by a fire in 1905. The replica swinging bridge and some remnants of the Mill still exist today even after the  floods and fires over the years.

Victor Bloede created Baltimore County Water and Electric Company in the early 1900’s to address the problem of inadequate water in Southwest Baltimore City and County. He built the water filtration plant on the site of the old Avalon Nail and Iron Works. The concrete settling tanks can still be seen near the Avalon Visitor Center. Bloede also created the world’s first underwater hydroelectric plant in 1907 just upriver of the Orange Grove area. Bloede’s Dam is currently in the process of removal for a variety of reasons. The remains of another dam, the Avalon Dam, destroyed by Tropical Storm Agnes in 1972, can be seen upriver from Shelter #105. 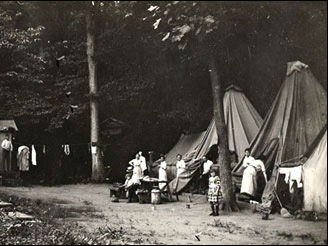 Camp at Vineyard by Besley.

Fred Besley and the Success of Maryland’s State Parks

Maryland State Parks originally began in 1906 with the establishment of the Maryland State Board of Forestry. It is one of the oldest state park systems in the United States. Patapsco Valley Forest Reserve was its first state park in 1907.

Fred Besley was Maryland’s first State Forester and served the longest of them all, from 1906 to 1942. He is well known for greatly decreasing acreage lost to forest fires by using a system of volunteer “fire wardens” to fight fires. His other important contribution was opening up and encouraging the use of public lands for recreation, which would bring in revenue and support for forest preservation. Starting around 1916 he camped with his family in the Orange Grove area to encourage people to come enjoy the outdoors. People could camp the whole summer for free as long as they obeyed regulations. Visitors stayed in WWI canvas tents on wooden platforms and even had electricity for lighting and radios.

To help the United States recover during the Great Depression, President Franklin Delano Roosevelt established the New Deal, a series of programs and public works projects to provide jobs, relief, and stabilization of the economy. One of the New Deal programs was the Civilian Conservation Corps (CCC), which put men to work to improve the condition of America’s natural resources and provide better access to them.

The 356th Company of the Civilian Conservation Corps worked and lived in Patapsco Forest Reserve, first in tents and then in cabins in Camp Tydings. Much of the work they did included planting trees, building current shelters, quarrying stone, improving roads, and creating hiking trails.

Camp Tydings was later used during WWII as the first camp for conscientious objectors in the United States. These pacifists did civil service work through the Park instead of serving in the military until the camp closed in August 1942. The remnants of Camp Tydings can be seen in the Avalon area of the park. The chimney of Shelter #1 was originally the chimney of the recreation hall.

Hurricane Agnes was a massive tropical storm and cyclone that damaged much of the Eastern Seaboard and Mid-Atlantic in 1972. At the time, it was the costliest hurricane to hit the United States in recorded history.

Agnes damaged part of Maryland including Patapsco Valley State Park, where waters reached 40 feet higher than normal and, anecdotally reached almost to the top of the arches of the Thomas Viaduct. Many of the historic resources of the Park were damaged or lost in the hurricane, including the park headquarters in the Orange Grove area. River Road was washed out near Ilchester and part of it is only open to foot traffic even today. The southern park area was closed for repairs, but later reopened.

The Patapsco Valley Heritage Area also known as the Patapsco Heritage Greenway works to preserve, protect, interpret, and restore the local environment, history, and culture. They partner with the park to support it through stewardship, recreation, heritage tourism, and more. 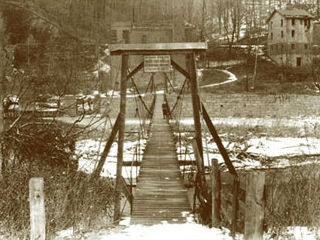 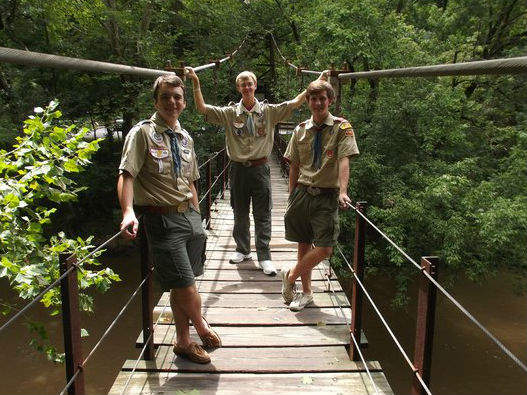 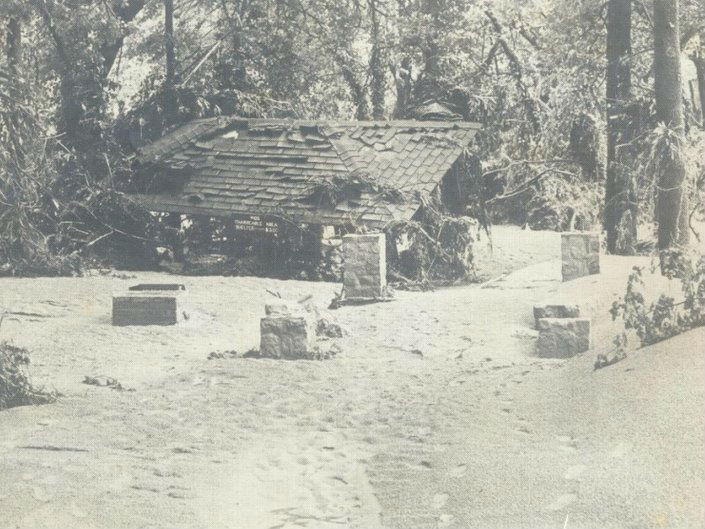 Many thanks to Volunteer Ranger and Historian Ed Johnson who provided a history tour of the southern portion of the park. He has written various articles on the history of the park and is working to publish them in a book. Preservation Maryland would also like to thank Michelle Ramirez, Multicultural Outreach Coordinator at Maryland State Parks.

This post was translated into Spanish by Katherine Longabaugh, one of Preservation Maryland’s Waxter Interns. Kate’s work with Preservation Maryland has focused on cataloging and archiving the organization’s large digital photography collection. She is originally from Seattle and is an undergraduate student at Goucher College studying Spanish, Historic Preservation, and Environmental Studies. Learn more about Kate and our intern program here: presmd.org/waxter.