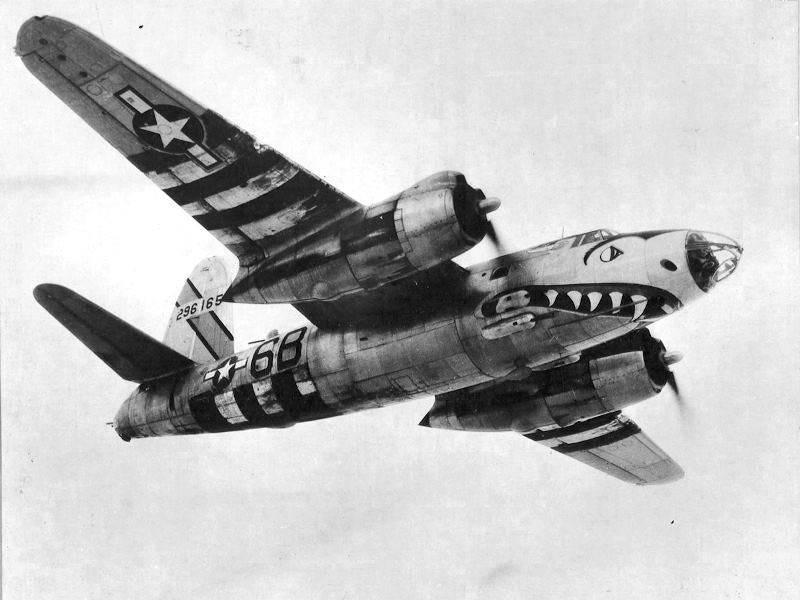 B-26 of the 599 Bomb Squadron with D-Day invasion stripes. Photo from U.S. Army.

Among the nearly 12,000 planes engaged in D-Day, hundreds of B-26 Martin Marauders played a pivotal role in softening the German defenses on the beaches of Normandy. The B-26 was constructed by the Glenn L. Martin Company in Middle River, Maryland just east of the City of Baltimore. The factory complex abutted the Martin Company’s airport, today known as Martin State Airport, where planes were tested before departing for combat.

Between 1941 and 1945, 5,288 B-26 bombers were manufactured in Maryland all destined for service overseas in European and Pacific Theaters. Unlike many other bombers of World War Two, the B-26 was largely unheralded due in large part to it’s reputation as a “widowmaker” as a result of high accident rates early in production during take-offs and landings. Somewhat surprisingly, the B-26 ended the war with the lowest loss rate of any US Army Air Force bomber.

On D-Day, however, the B-26 played a starring role as it pummeled German fortifications and troops in advance of Allied landings early that morning. During the invasion, the B-26 flew extremely low which resulted in much more precise bombings. The bombers flew so low that day that several B-26 pilots recalled believing they had been hit by enemy fire and only later realized they were actually feeling the percussion of their own bombs dropped so close to their plane.

At the conclusion of World War Two, the B-26 had been flown in more that 110,000 missions and dropped in excess of 150,000 tons of bombs. By 1947 all B-26 bombers had been decommissioned from service and today only six are still known to exist – and just one is capable of flight.

Founded in 1912 by Glenn L. Martin, the Martin Company produced scores of planes during the early and mid-20th century. The factory which produced nearly all of the B-26 bombers in Middle River, Maryland and employed almost 50,000 workers at the height of production sat vacant for many years since the Martin Company’s departure.

Fortunately, the 1.9 million square foot complex was recently acquired by a developer with the intent of adaptively reusing the space for a mixed-use redevelopment. Baltimore County Executive Johnny Olszewski applauded the purchase, noting that, “By reinvesting in this historic site, we can ignite the economic potential of this property and continue to expand opportunity across the Middle River community.” The Middle River Martin Factory project, protected by an easement with the Maryland Historical Trust, is also a likely candidate for state and federal historic tax credits and falls within a recently designated Opportunity Zone.

Learn more about Maryland at D-Day