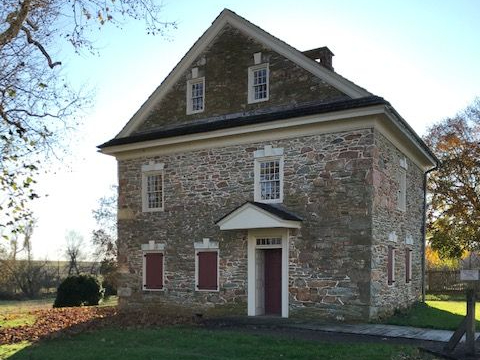 The house was built in the mid-eighteenth century, but was destroyed by fire in 1822 and completely rebuilt. The windows seem to be Georgian, with heavy frames and jackarches and keystones, while the off-center door suggests the Greek revival. Note that the stone façade continues to the peak of the gable. The pent roof over the front door is a Quaker influence. 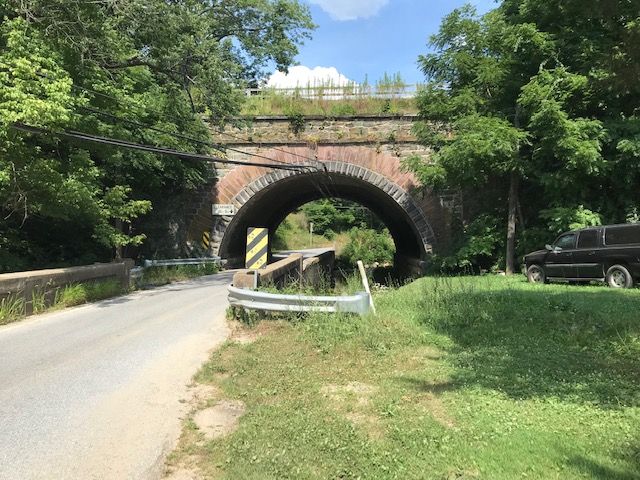 This bridge was built in 1871 to span Codorus Creek. While built chiefly of brown limestone, the voussoirs of the arch are faced with red and black brick, rendering a utilitarian structure more interesting and attractive. The bridge now forms a part of the Northern Central Trail. 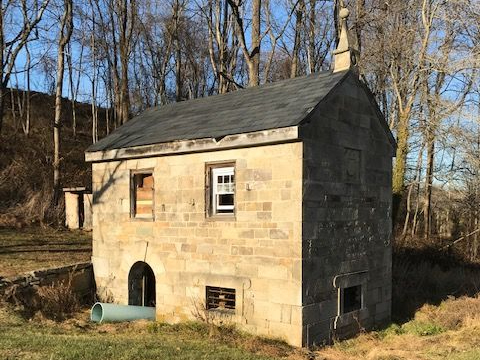 This charming, small (16′ x 24′) limestone structure was built in 1816. Originally, the upper floor was used as a schoolroom, with the springhouse below. The quality of the ashlar stonework is remarkable. For example, the surrounds of the two lower floor barred openings have lovely designs, and there is a carved decoration in the gable end at the roofline. Note also the arched entrance with a projecting keystone. 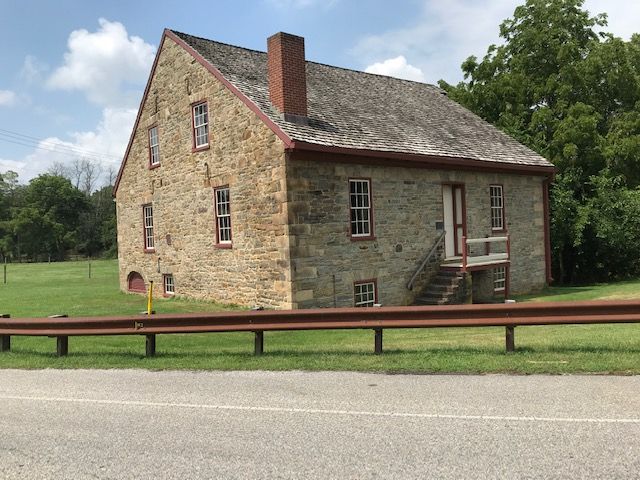 This building, constructed in 1794, formerly functioned as a sawmill and a grist mill, utilizing a wooden overshot wheel. Its quoins and jackarches enhance its overall appearance. It was built for Abraham Swigart by John Nagle, a mason whose name is inscribed on the date stone on the west end of the wall near the “Martin’s Box” (not visible in the photograph),  an overhang from which a pulley and rope hoisted bags of grain). 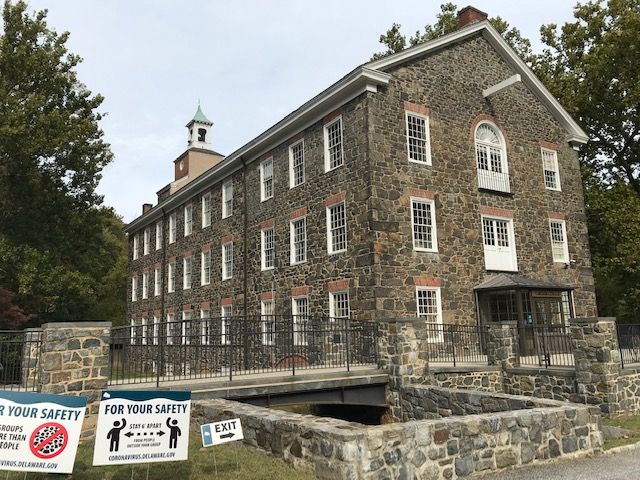 This impressive structure was built in 1812 and first functioned as a woolen mill. Later part of the duPont Hagley gunpowder works, it was used as a metal keg factory.  It now serves as the main exhibition hall for the museum. The works were established at the site in 1803, chosen for its access both to water power and plentiful gneiss stone, which was used to construct buildings intended to be resistant to damage from explosions. Note the brick jackarches, one header, and one stretcher high. On the far side of the building is an attached five-story bell tower. 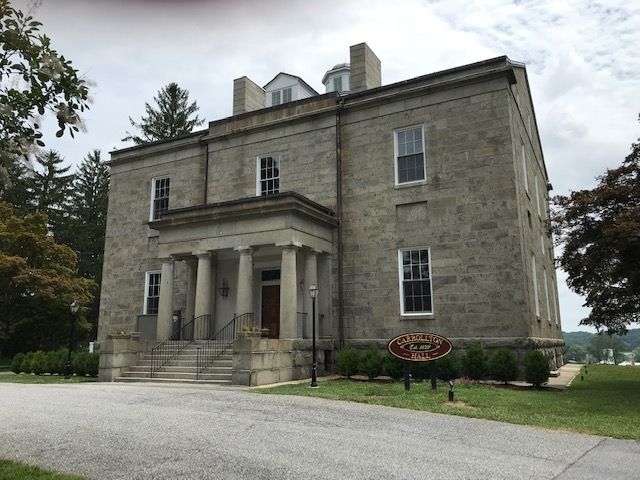 Carrollton Hall was buit by Charles Carroll of Carrollton for his granddaughter, Emily McTavish, in 1832. It was designed by William F. Small, who had apprenticed with Benjamin Latrobe. Constructed of granite ashlar (much like the stone in Latrobe’s basilica in Baltimore) in the Greek Revival style, the house has impressive identical porticos supported by Doric columns on both the front and rear sides. The house is now owned by the Franciscan Fathers. 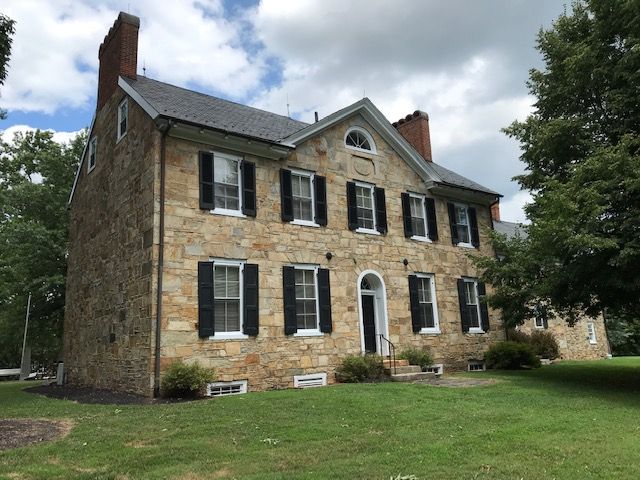 This house was built in 1808 by Thomas Hays, one of the founders of Bel Air. The main section of the building is five bays wide with a center gable on the façade. There is a date stone in the gable. The façade is constructed of dressed stone, while the other three sides are built of fieldstone. Note the arched doorframe, echoed by a semi-circular window in the gable. Each of the two massive chimneys is topped by six terra cotta arched caps.  Interestingly, the structure has no interior load-bearing walls. The house is on the campus of Harford Community College and serves as an administration building. 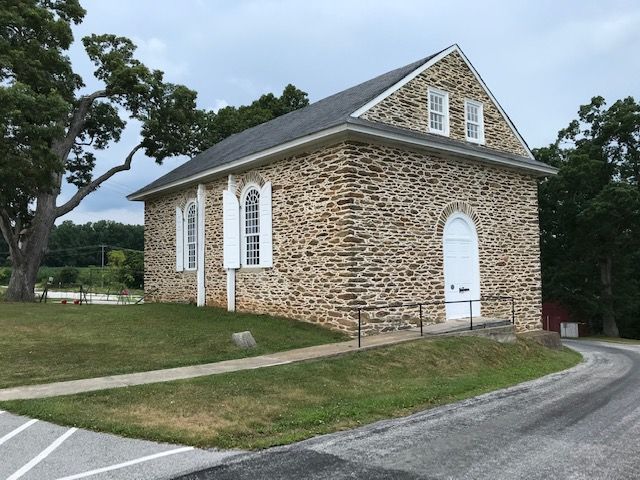 Built in 1773, this church, devoid of ornamentation, is reflective of the severe Scots-Irish Presbyterian tradition. It is constructed of fieldstone and has wide double doors set in an arched doorframe. The side windows are also arched. There are two square windows above the pent eave. While austere, the building has a quiet elegance. 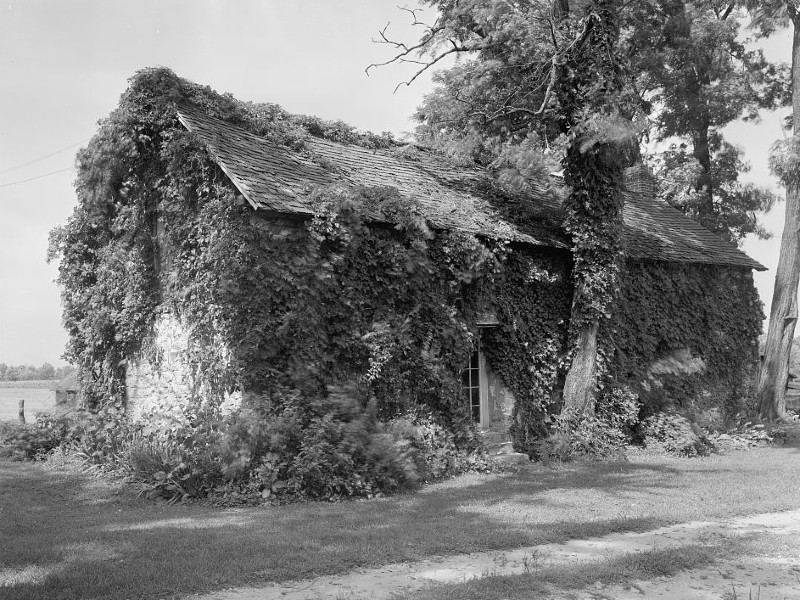 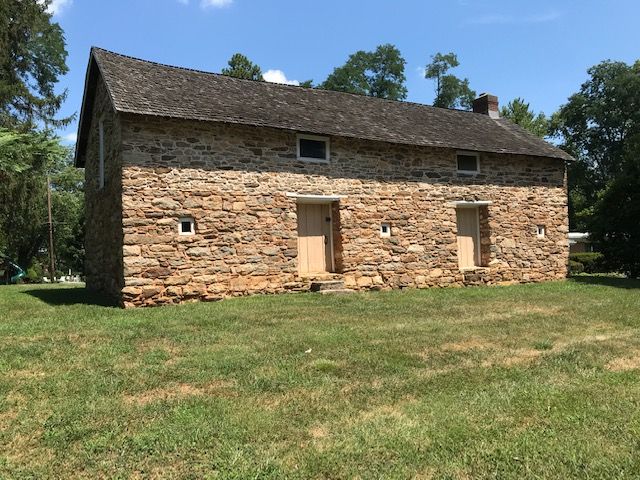 Fort Garrison was built in the 1690s on orders from Governor Nicholson to serve as a frontier stronghold to guard against attacks by Native Americans. It is the sole remaining colonial blockhouse in Maryland. Built of fieldstone, it is forty-eight feet long and eighteen feet wide. Originally a one-story structure, a second story was added in the early nineteenth century, long after it ceased to function as a fort.