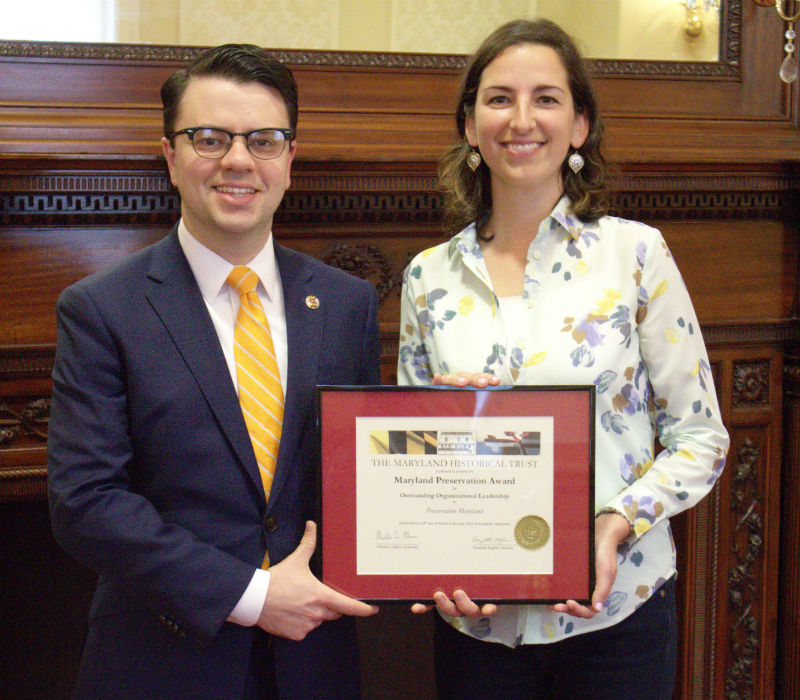 Nicholas Redding and Renee Novak (Resource Center Field Director) accept an award from the Maryland Historical Trust for the organization's response to the 2016 flood.

The Maryland Historical Trust, the state agency responsible for preservation, presented the honor, noting that,

The preservation advocacy group’s on-the-ground efforts in the wake of the Ellicott City flood have had a real and lasting impact and serve as a model for how preservation organizations can effectively respond to future natural disasters.

The work of Preservation Maryland in Ellicott City began almost immediately after the flood and has included survey & documentation, emergency engineering, on-the-ground technical assistance, design assistance, navigating tax credits and financial incentives as well as generating detailed 3D scans and drone surveys of the area. The organization established a Preservation Resource Center in Ellicott City in August of 2016 and just recently announced a new $50,000 grant program in partnership with Historic Ellicott City, Inc.

Preservation Maryland Executive Director Nicholas Redding explained, “This is a tremendous honor and we are humbled by this recognition. Our accomplishments would not have been possible without many partner organizations, agencies, elected officials and generous donors.” Redding continued, “The 2016 Ellicott City flood was an unmitigated disaster, but it has provided an opportunity enhance an already wonderful historic community and we are very fortunate as an organization to have had the opportunity to support Ellicott City and the people who call it home.”