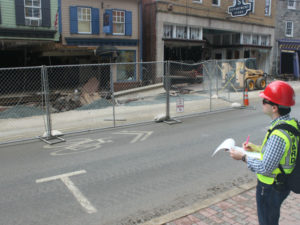 “Preservation Maryland has long been committed to the future of historic Ellicott City — a crown jewel of the state’s historic communities. Following the harrowing floods of the past several years, the organization has partnered with local government, foundations, corporations, individuals and organizations to deploy thousands of dollars in funding, technical assistance and advocacy in support of the unique character of this special place.

Preserving this unique place has and always will be a balancing act with growth and the demands of a changing and unpredictable climate. Today’s announcement that an additional nine buildings will be saved and preserved as a result of the extension of the planned “North Tunnel,” is an extremely positive development for this community. Additionally, the extended North Tunnel is anticipated to reduce water on the street in the West End from nearly 3 feet to less than half a foot in a 100-year flood scenario.

Nicholas Redding, Preservation Maryland President & CEO explained, “Saving Earlougher’s Tavern and several other significant structures on Ellicott City’s West End isn’t just a victory for history – it’s a victory for the future of this community.” Redding continued, “Ellicott City’s rich and diverse history is what makes it unique and unlike any other place in America – and the preservation of these buildings will help to further protect that cherished character. We’re pleased to see this positive next step and are eager to hear the roar of machines begin work on the tunnel that’s making this preservation possible.”

Preservation Maryland appreciates the dedication County Executive Ball and the entirety of Howard County government has shown to the history and future of Ellicott City and looks forward to the completion of this critical mitigation project.”