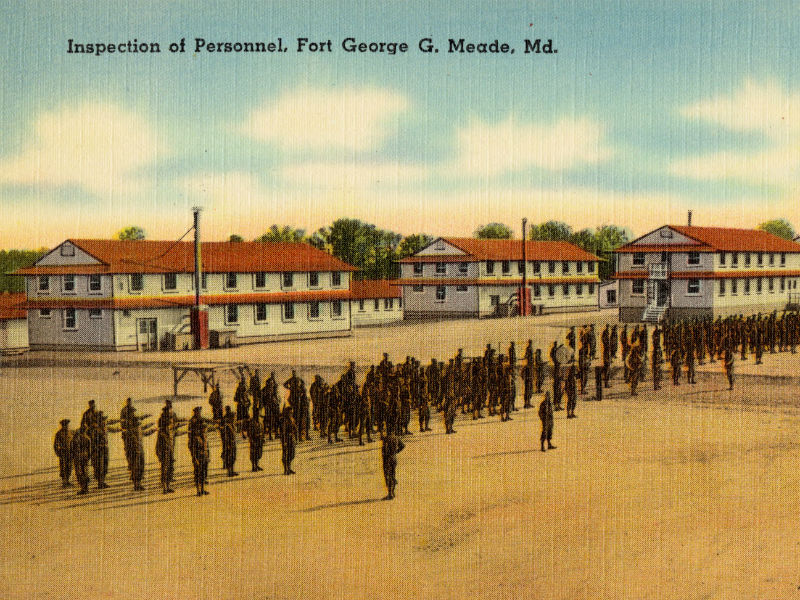 Postcard of Fort Meade. Photo from University of Maryland.

Only in Maryland: How Fort Meade Got its Name

Did you know!? Fort Meade in Maryland was previously known as “Camp Annapolis Junction” and “Camp Admiral.”

On March 5, 1929, War Department General Order no. 6 was issued, officially designating 5,400 acres of land, located 18 miles southwest of Baltimore, as Fort George G. Meade. Fort Meade, for short, was authorized to be built by an Act of Congress in May 1917, and it was to serve as one of the 16 cantonments built for troops drafted for World War I.

Its current site was selected on June 23, 1917 due its proximity to the railroad, Baltimore port and Washington D.C. While it may not have been a deciding factor, the land of Fort Meade was originally owned by Maj. Samuel Snowden, a Revolutionary War hero. During the time of construction, Fort Meade was actually called both “Camp Annapolis Junction” and “Camp Admiral.” However, by the time the camp opened, it had been named in honor of Maj. Gen. George G. Meade by direction of the War Department’s General Order no. 95, and was used a training post. By 1918, the post had been nicknamed, “Camp Meade Cantonment.” On the same grounds, the Camp Franklin Signal Corps School and the Camp Benning Tank School had opened in 1918 and 1919, respectively. In addition to the two schools, the “Hello Girls” were also stationed at the camp. The 450 women that made up the “Hello Girls” served as bilingual telephone-switchboard operators in the U.S. Army Signal Corps.

Once World War I had ended, more than 400,000 soldiers had passed through Camp Meade. Furthermore, over 22,000 horses and mules had been stabled there as part of a remount program, which was run by Major Peter F. Meade, a nephew of General Meade. In 1923, Old Joe, a tank riding dog, became the 66th Infantry’s official pet by order of the commanding officer of Fort Meade. He is enshrined as the Army’s only tank-riding dog. On March 2, 1928, the War Department decided to yet again change the Fort’s name to Fort Leonard Wood, as per War Department General Order no. 3. Unfortunately, this name change did not sit well with many. Opponents of the name change had to wait a full year before the War Department passed War Department General Order no. 6, which re-designated the camp as Fort George G. Meade and made it a permanent U.S. Army installation.

Fort Meade has since been used as a training center and a prisoner of war camp, in in which it held approximately 384 Japanese, German, and Italian immigrant residents of the U.S. arrested as potential fifth columnists during World War II. Today, Fort Meade is home to the Defense Information School, the Defense Media Activity, the United States Army Field Band, and the headquarters of United States Cyber Command, the National Security Agency, the Defense Courier Service, and Defense Information Systems Agency headquarters.

More “Only in maryland” posts

This post was written by Ross Bater, one of Preservation Maryland’s Waxter Interns. Ross’s work with us focuses on researching best practices and resources for preservation in rural Maryland. He is a recent history graduate University of Maryland, Baltimore County. Learn more about Ross and our intern program here: presmd.org/waxter.