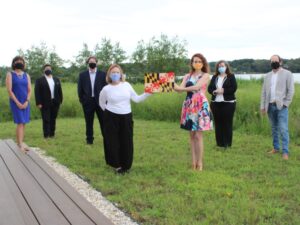 Kent County, Maryland’s picturesque historic and natural resources were the subject of a model report which confirmed the unique and unparalleled opportunities for preservation in this eastern shore county. For their inspired and innovative undertaking of the Preliminary Cultural Landscape Assessment of Kent County, Maryland, the project team comprised of the Kent Conservation & Preservation Alliance, Barton Ross & Associates, McGinnis Landscape (now Kennon Williams Landscape Studio), Heritage Strategies, and Washington College Center for Environment and Society, will receive the Smart Growth Excellence Award from Preservation Maryland and Smart Growth Maryland.

With funding from Preservation Maryland, the Kent Conservation and Preservation Alliance has prepared and released a report and interactive map about the Eastern Shore county’s historic rural landscape. 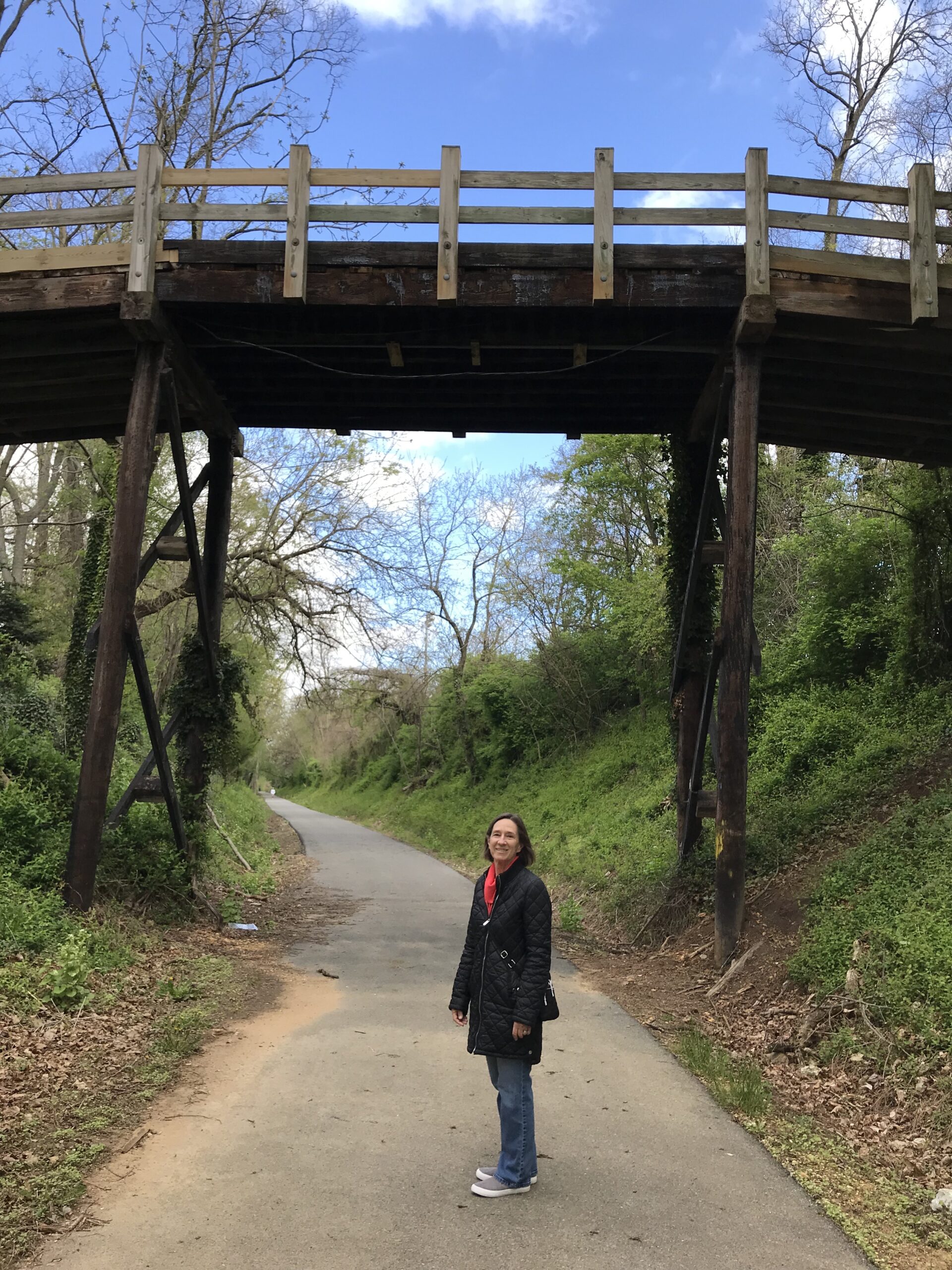 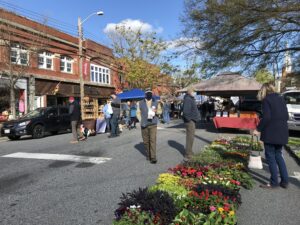 We arrived in Chestertown as the local farmer’s market was getting started. We admired the range of locally grown products and some local arts and crafts.  We made a beeline for coffee and breakfast from the Evergrain Bread Company and sat outside taking in the morning sun.  Strolling back through the farmer’s market, I found one of the farms that was on the Farm & Country Driving Tour as I am partial to baked goods – Lapp Family Farms.  We met the owner who was unaware that his farm was featured on the driving tour.  We bought a nice assortment of baked goods, along with some vegetables and local honey at one of the other vendors. 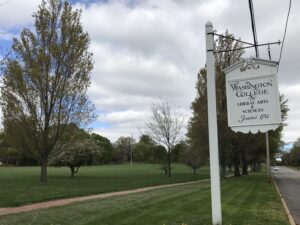 Our rails to trails that we discovered was an old rail line that began in 1872, leased to the Philadelphia, Wilmington & Baltimore Railroad, purchased by the Pennsylvania Railroad, stopped passenger service in the 1970’s, and stopped freight service in the 1990’s.  The portion of the old rail bed that connected the original train station in Chestertown to Washington College to the north was converted to the “Wayne Gilchrest Trail, which opened on Earth Day in 2012.  It is named for the former congressman whose 2003 federal earmark made development of the trail possible.”  The trail was quiet on our morning walk.  We went beyond the paved trail where it became grass again, passing what looked like a small reservoir and ending at the Chestertown water tower.  We backtracked and walked through the Washington College campus, the oldest college in Maryland. It was founded in 1782. “George Washington authorized the use of his name and gave the college its largest gift of 50 guineas, serving on the Board of Visitors and Governors for five years.” 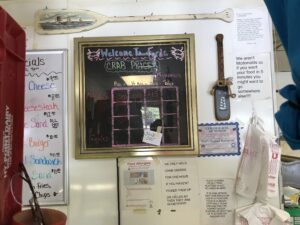 On our way to Rock Hall, I had Jeff mark the farms from the driving tour map along the way including those testing out advanced agricultural practices and wildlife management techniques, produce and grain.  Some farms are part of easements to the Maryland Environmental Trust, Eastern Shore Land Conservancy, and some identified as Maryland Century Farms, are those owned by the same family for over one hundred years.  We intended to do some hiking around Eastern Neck National Wildlife Refuge near Rock Hall.  “It is a 2,285-acre island providing habitat for thousands of wintering waterfowl, including the tundra swan. The refuge holds the designation of Important Bird Areas by the Audubon Society.”  Although closed for the morning, it gave us the opportunity to talk to one of the locals both about the refuge and a recommendation for lunch.  We headed to Ford’s Seafood for crab cakes and rockfish.  I appreciated the sign on the wall next to the daily crab prices …. “We aren’t McDonald’s so if you want your food in five minutes, you might want to go somewhere else!”  It was worth the wait.  We explored a bit of Rock Hall and popped into Java Rock for some coffee to go. 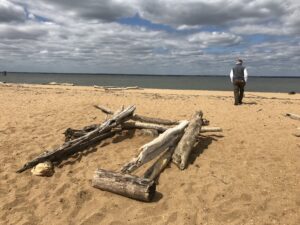 We headed north to Betterton Beach, which started as a fishing village and evolved into a summer resort.  The

Bay Belle, a 2,400-passenger steamboat, made daily round trips from Baltimore during the summer months.  With the building of the Chesapeake Bay Bridge in the 1950’s the area gradually evolved into the quiet small town that it is today.  We could imagine the steamboat docking the passengers for a day of fun as we trekked across the beach. From Betterton, we drove east and made an unlikely, but rewarding stop in Still Pond.  Jeff spied a boat builder sign, Graham Ero, Wooden Boat Builder, on a building so he wanted to stop to check it out.  While he was exploring, I crossed the street to a barn that housed a pottery studio, Doug Sassi Pottery, that I had recognized at the farmer’s market in Chestertown.  I ended up buying some beautiful pottery and talking at length to the “potter’s wife” Gretchen Sassi.  She gave me the history of the area, including the historical marker on her property.  “In the village of Still Pond, twelve years before the 19th amendment established women’s suffrage, cast their ballots in the municipal election of 1908, provided the right to vote to any make or female resident taxpayer over age 21.  Fourteen women were registered to vote, including two African American.”  Who knew such history was in this small quiet crossroads. 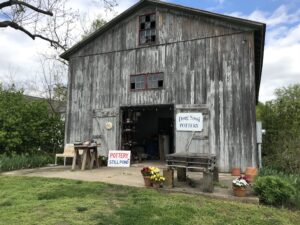 Tracking down my husband across the street, he was deep in conversation with the boat builder, Graham Ero, who let us see some of his amazing craftsmanship in restoring and building wooden boats. Jeff has a habit of making me stop in places that I might have missed. We drove further east to Galena, then circled back toward Chestertown.  Miles and miles of farmland and crossing the head of the Chester River.  The pictures do not do the justice to the beauty of the rolling farms.  We also loved the sense of humor that we found at one of the farms with a tower of mailboxes with separate boxes for airmail, voicemail, junk mail, fan mail and bills!

We returned to Chestertown to do part of the self-guided historic walking tour, which is a nice way to explore this charming town.  We appreciated their fun signs to encourage social distancing … “stay one GEORGE WASHINGTON away from others (One George = 6’2”)”.  We took note of the urban greening project at the Phillip G. Wilmer Park and sat in the park to simply enjoy the view of the Chester River.  We helped to pump up the economy by doing some local shopping then finished at Bad Alfred’s Distillery. It was built in a former historic garage and filling station that opened in 2018.  It has a glassed-in distillery space where they make their own small-batch spirits and expanded to add a restaurant.  Of course, we got to talking to the owner, Al aka “Bad Alfred” and his wife, Jennifer Cassinelli about the distillery, how it was started and how it has grown over the past few years.  We came away with some great stories and spirits to enjoy for the future.

Next month will mark the end of our first year crisscrossing the state.  It is hard to believe that we had seen nearly half of Maryland and there is so much left to explore!