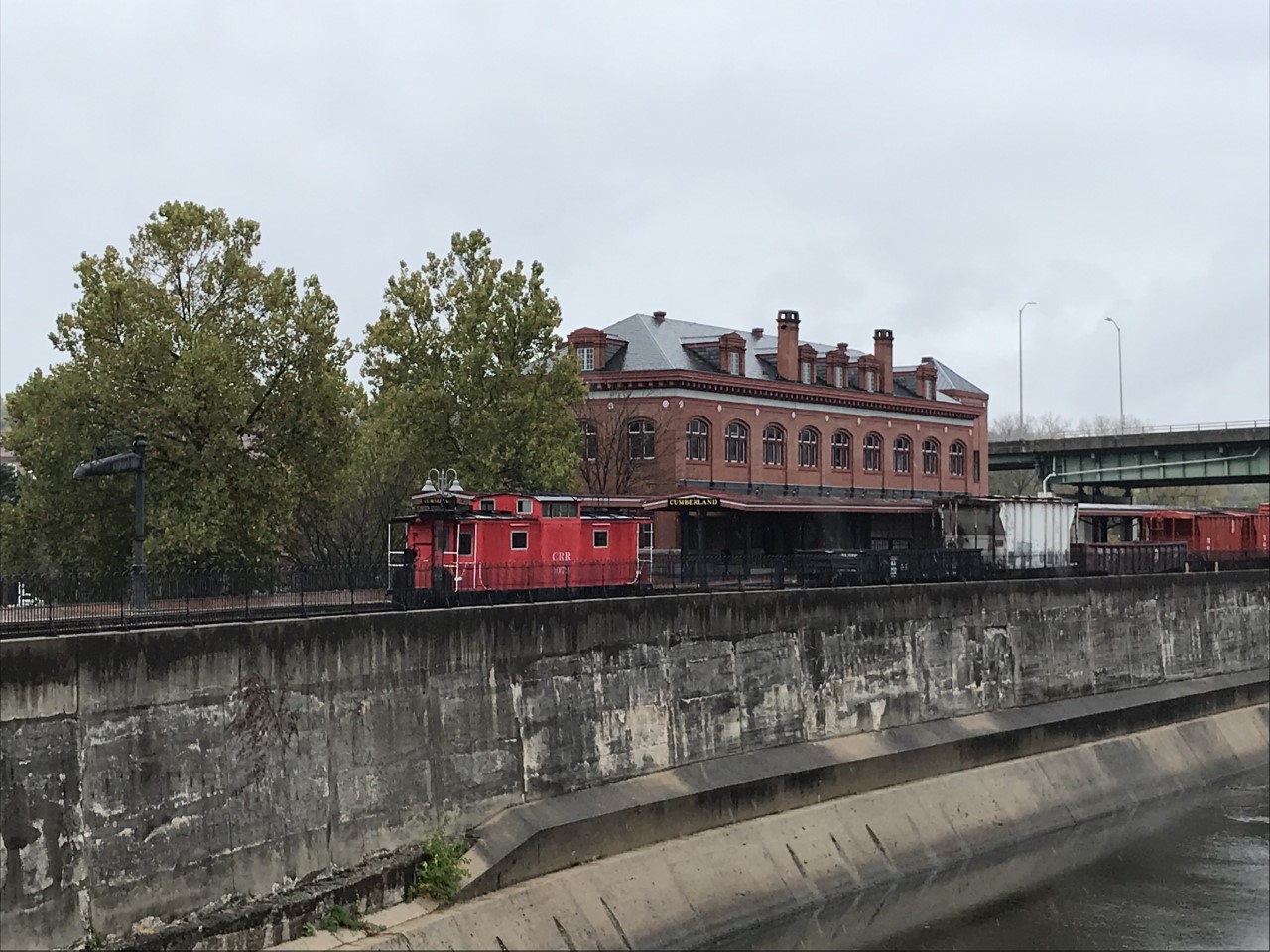 The fifth county on travel experts Diane and Jeff’s twenty-three counties and Baltimore City exploration of Maryland was Allegany County. Their approach continues to be outside adventuring, seeking out trails, rails and different parts of history, preservation, and adaptive reuse that were not explored deeply on their first go around the state.

From Diane and Jeff’s Travelogue:

The name Allegany “may come from a local Lenape word, welhik hane or oolikhanna, which means best flowing river of the hills or beautiful stream.” It is rich in history, and served as connections for rail, water and road transportation. Some still exist, like the National Road and mile marker zero that began in Cumberland and others that have been converted into biking and hiking trails such as parts of the Great Allegheny Passage and the C&O canal. A rainy and bit chilly for October, we took off to explore. 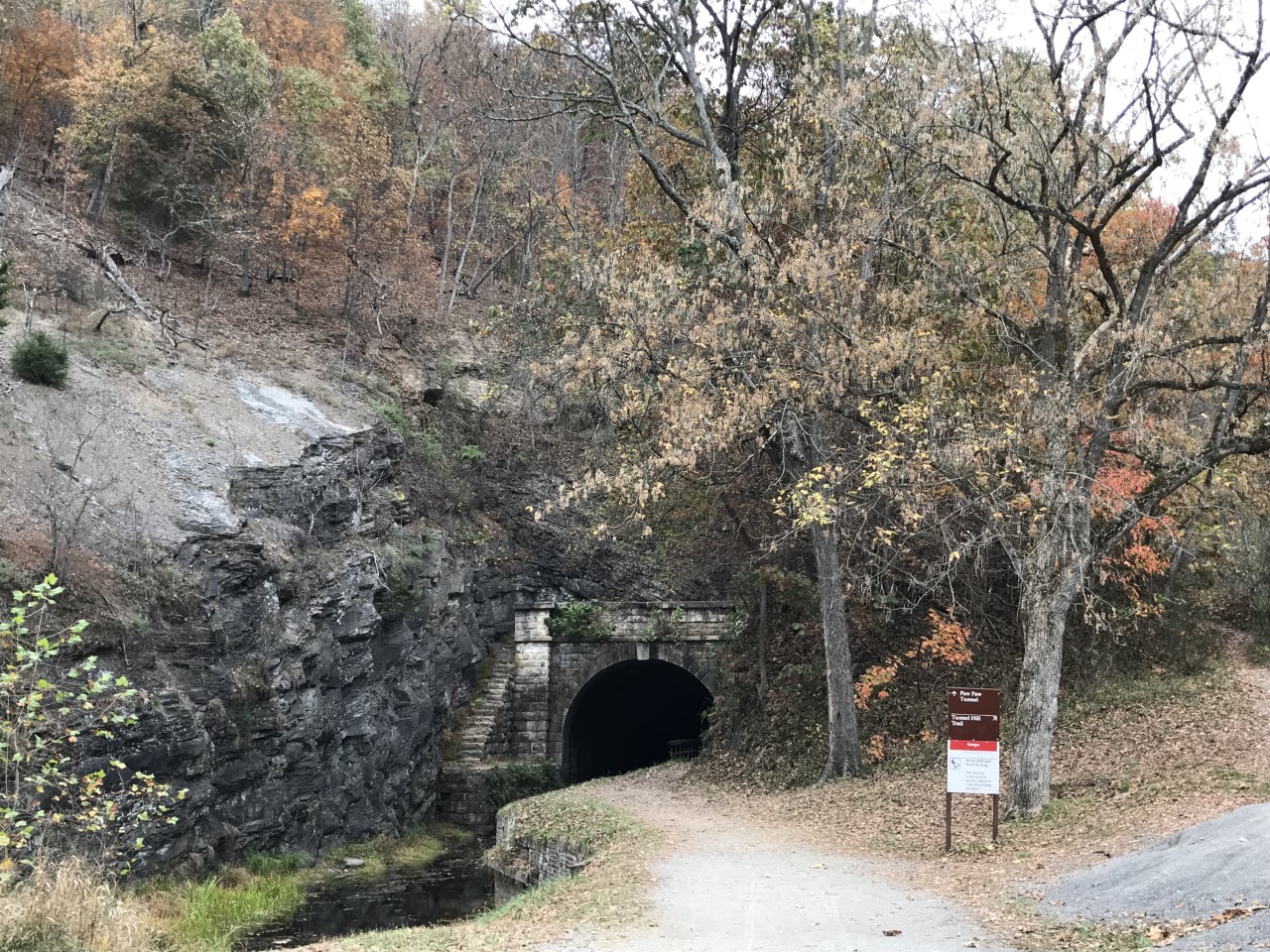 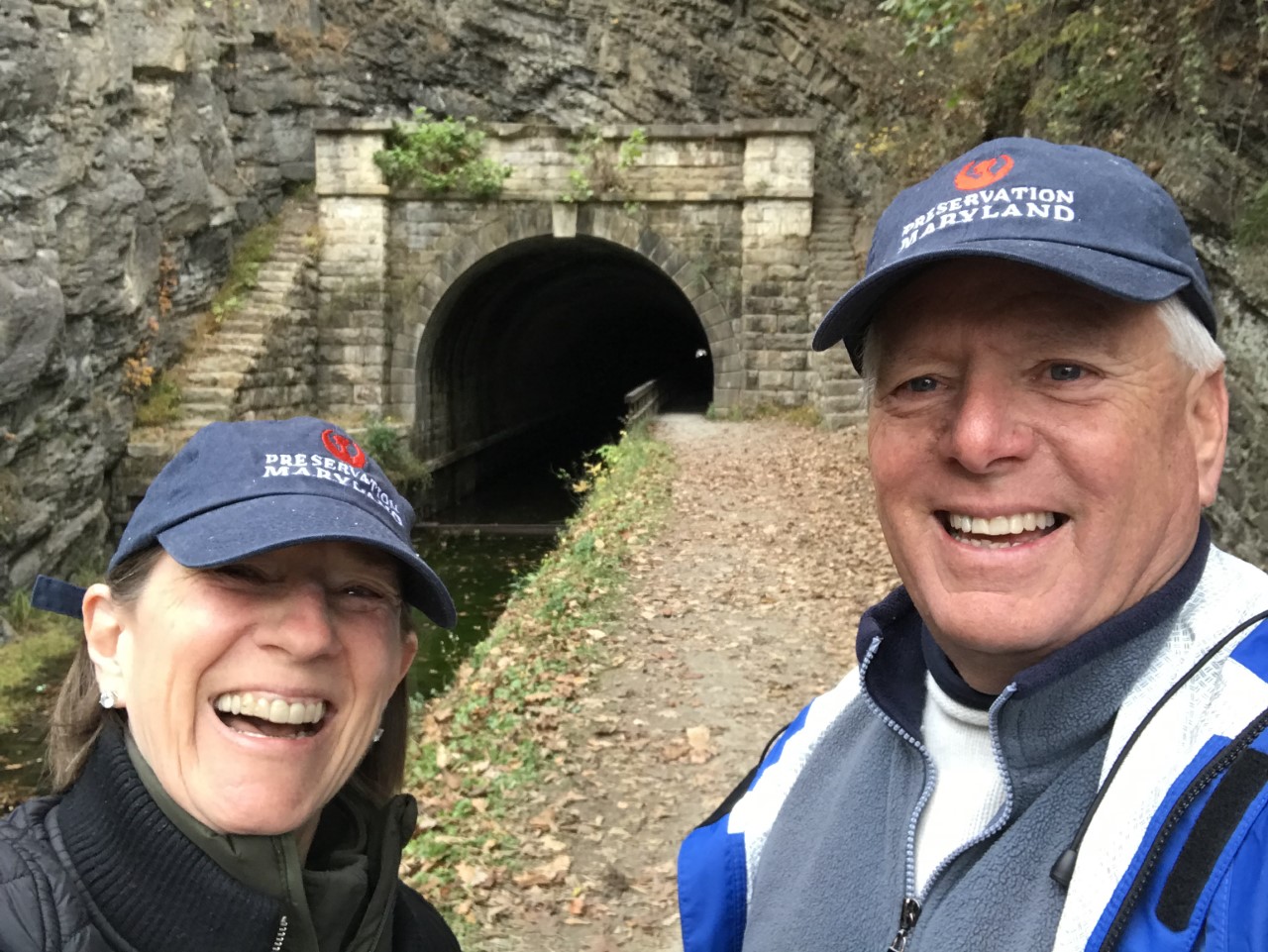 The shortest route from Baltimore to the Paw Paw Tunnel took us into West Virginia then back into Maryland, crossing some of the most spectacular and winding mountain roads. The tunnel is over 3,000 feet long and is part of the Chesapeake and Ohio Canal, built to bypass a stretch of bends in the Potomac River. Over six million bricks were used to build it and is described as an engineering marvel. Canal boats continued to use it until 1924. The tunnel can be explored by foot along the towpath. 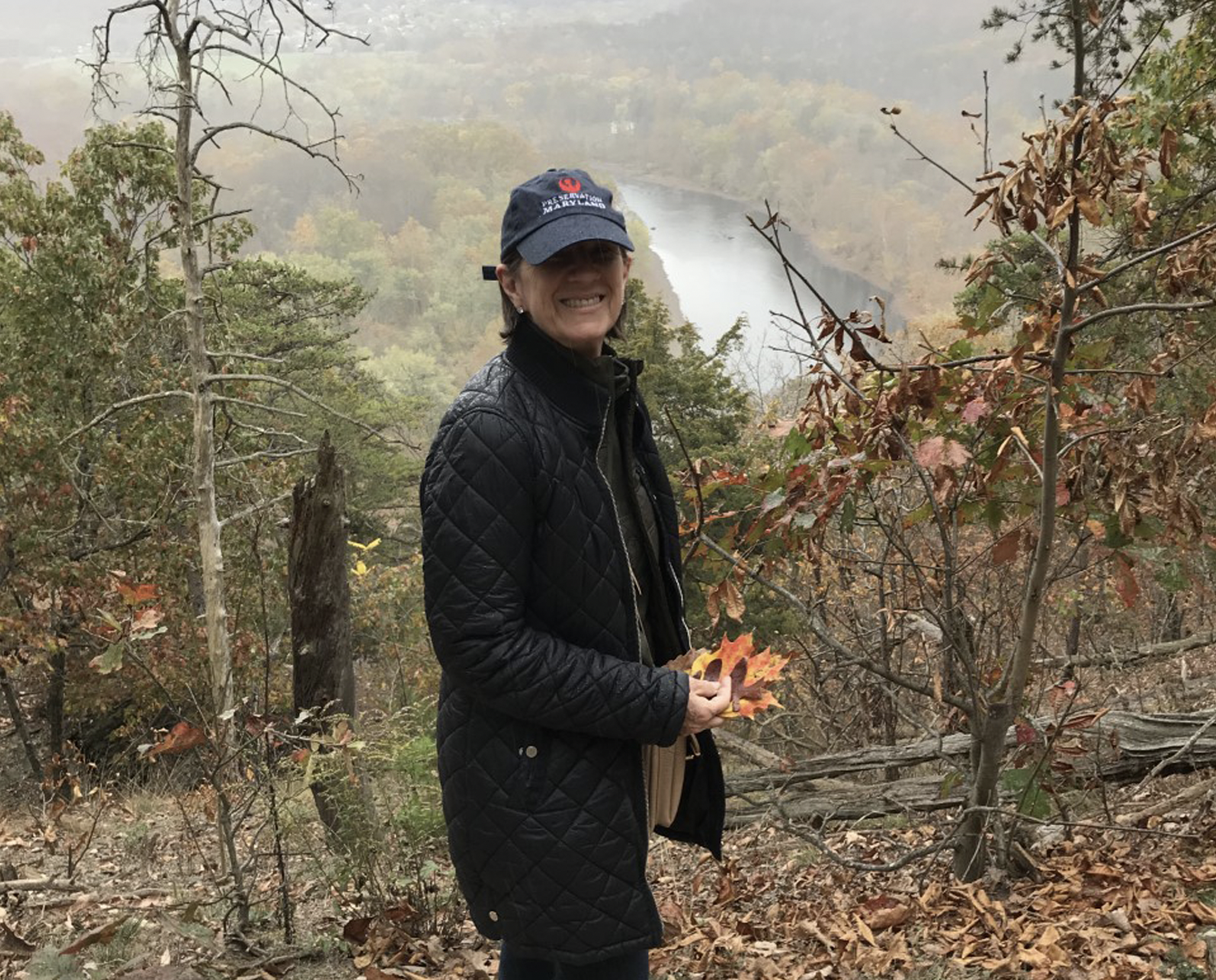 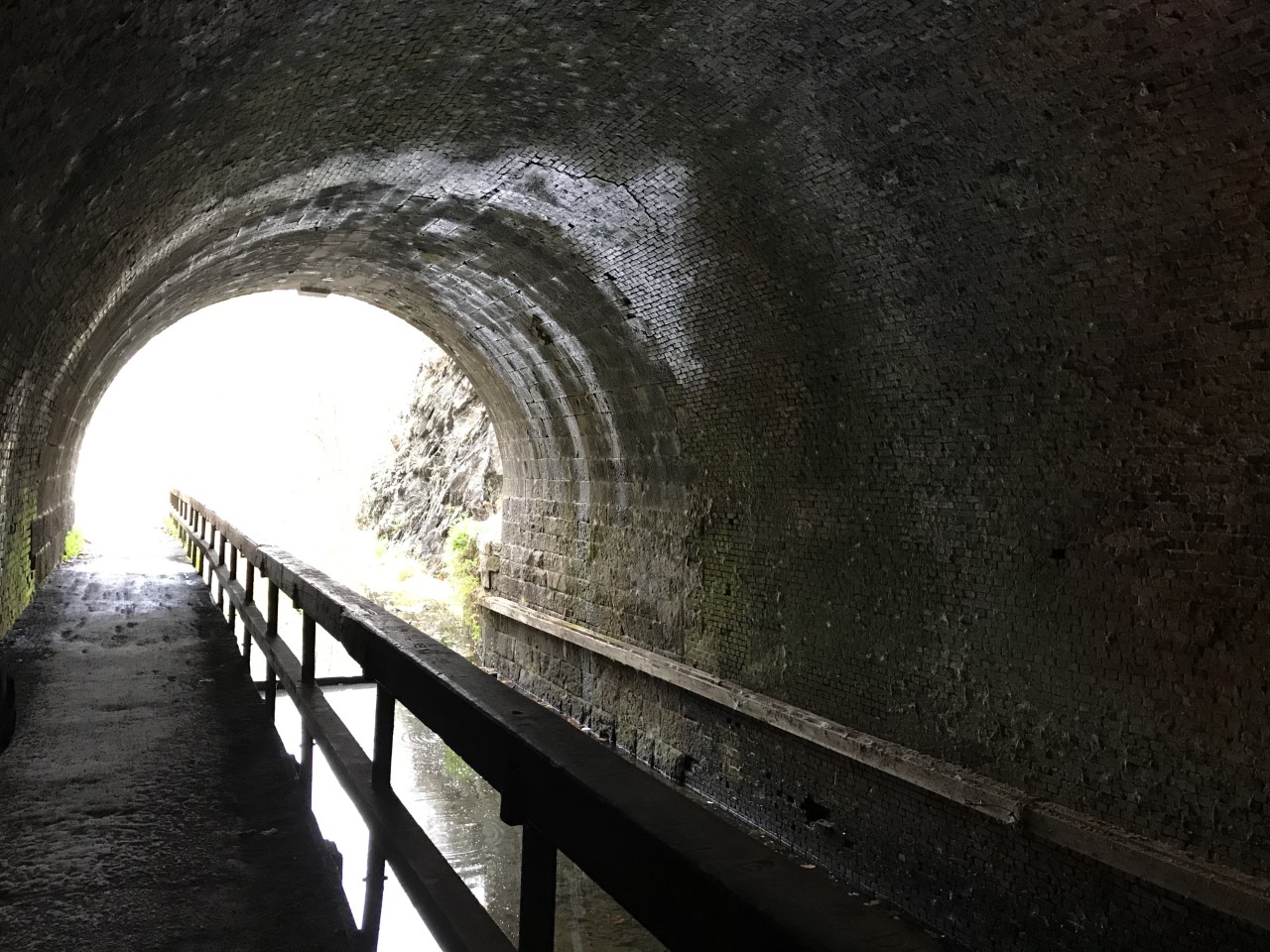 Our flashlights illuminated our way, marveling at the construction that still stands to this day, over 150 years later. The two-mile tunnel hill trail on our way back was equally spectacular, especially the  parts where you could see the river far below and stops to read the interpretive markers about the German and Irish workers who lived along the path during the tunnel’s construction. 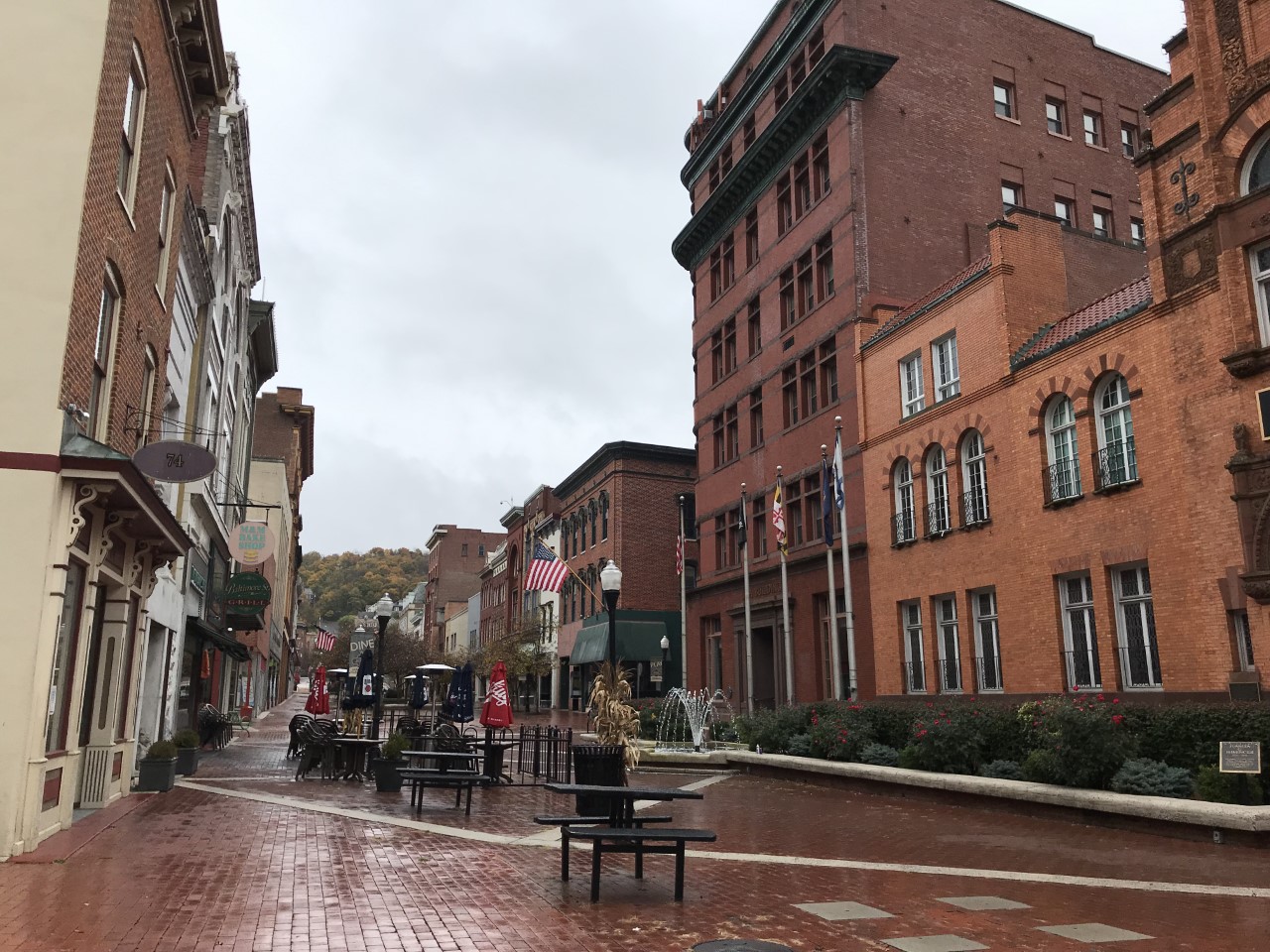 Although we had spent some time in Cumberland our first go round, including riding the Western Maryland rail, this time we stopped again at Café Mark, one of the only places that was open for a late breakfast. We took our own walking tour through the historic district and along some of the residential streets with some amazing Halloween decorations. 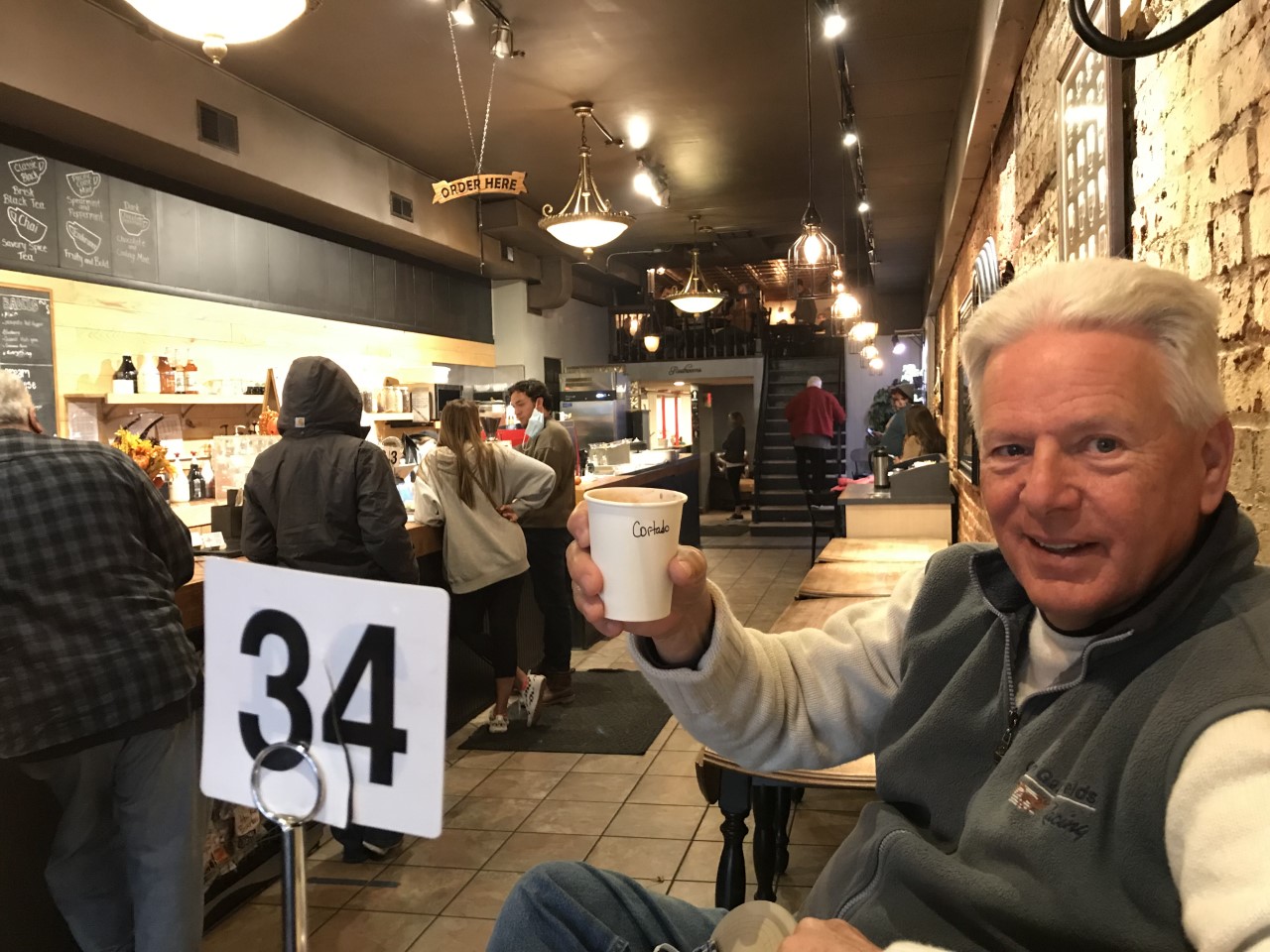 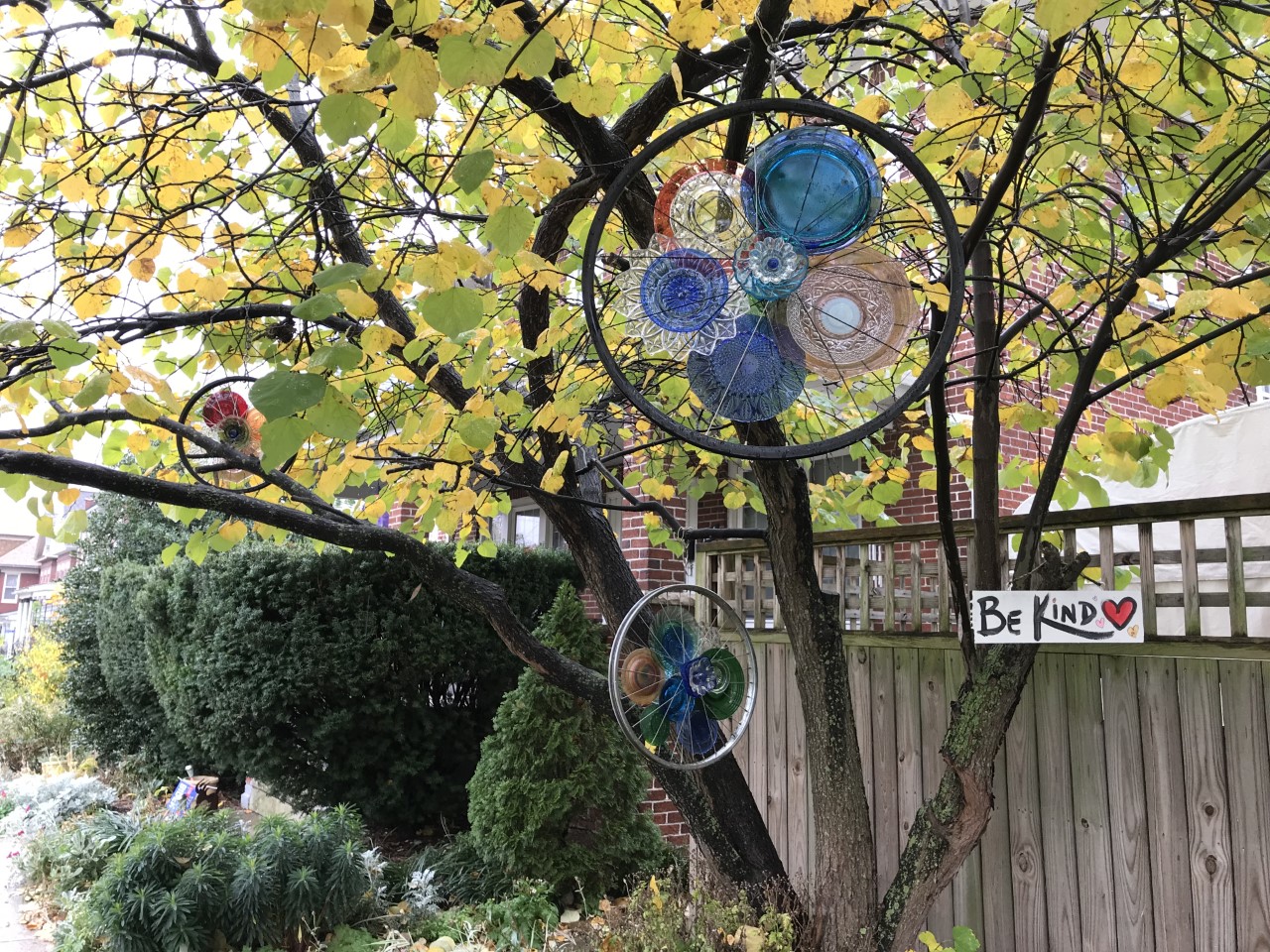 It was also an unexpected delight to see some artistry on display. Someone has ingeniously found a way to create hanging glass sculptures out of vintage glassware and a bicycle rim. Now that is creative preservation. 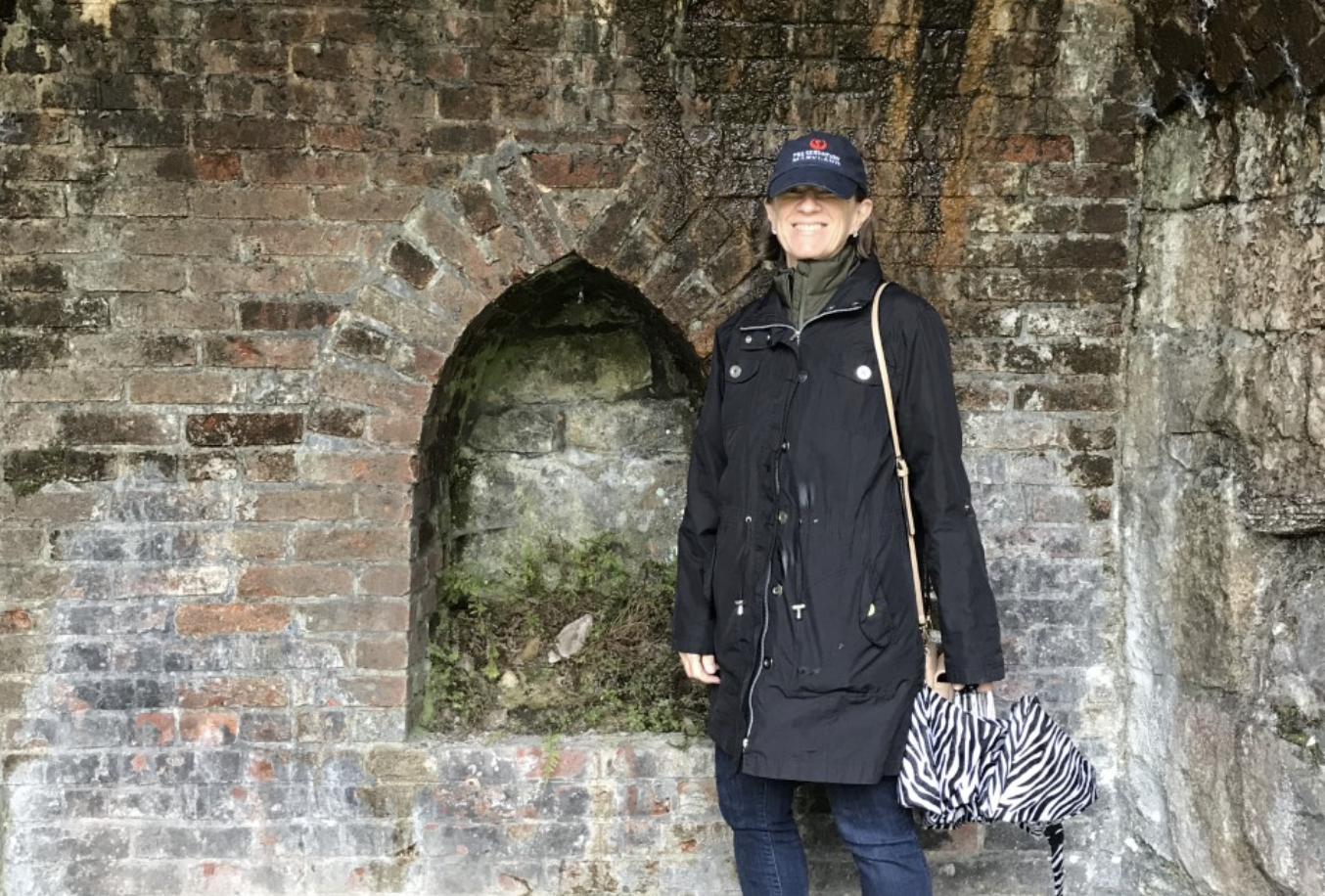 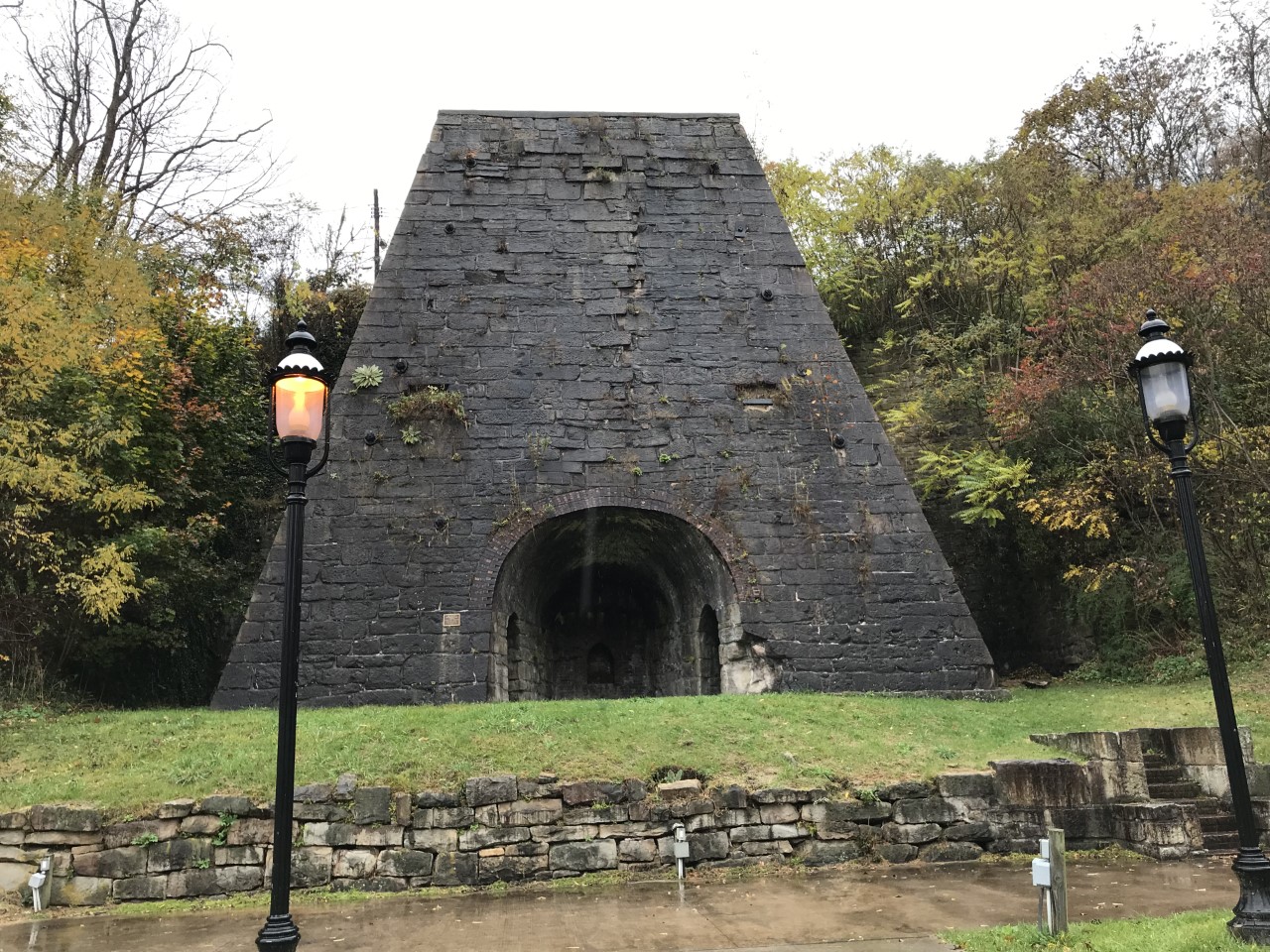 By the time we got to the entrance for Dan’s Rock, the rain and especially the fog had descended upon the state park. It is supposed to be one of the most iconic overlooks in the county and view of the Allegheny Front, but not today. We will have to leave that to another day. However, we headed further south to Lonaconing to check out the iron furnace. Lonaconing Furnace, The George’s Creek Coal and Iron Company Furnace No. 1, built in 1839 is listed on the National Register of Historic Places. It stands 50 feet high and known as the first coke furnace in the country. It sits in a little non-descript park in the center of the small town. You would likely miss it if you were just driving by. Another engineering marvel that still stands intact nearly 180 years later. 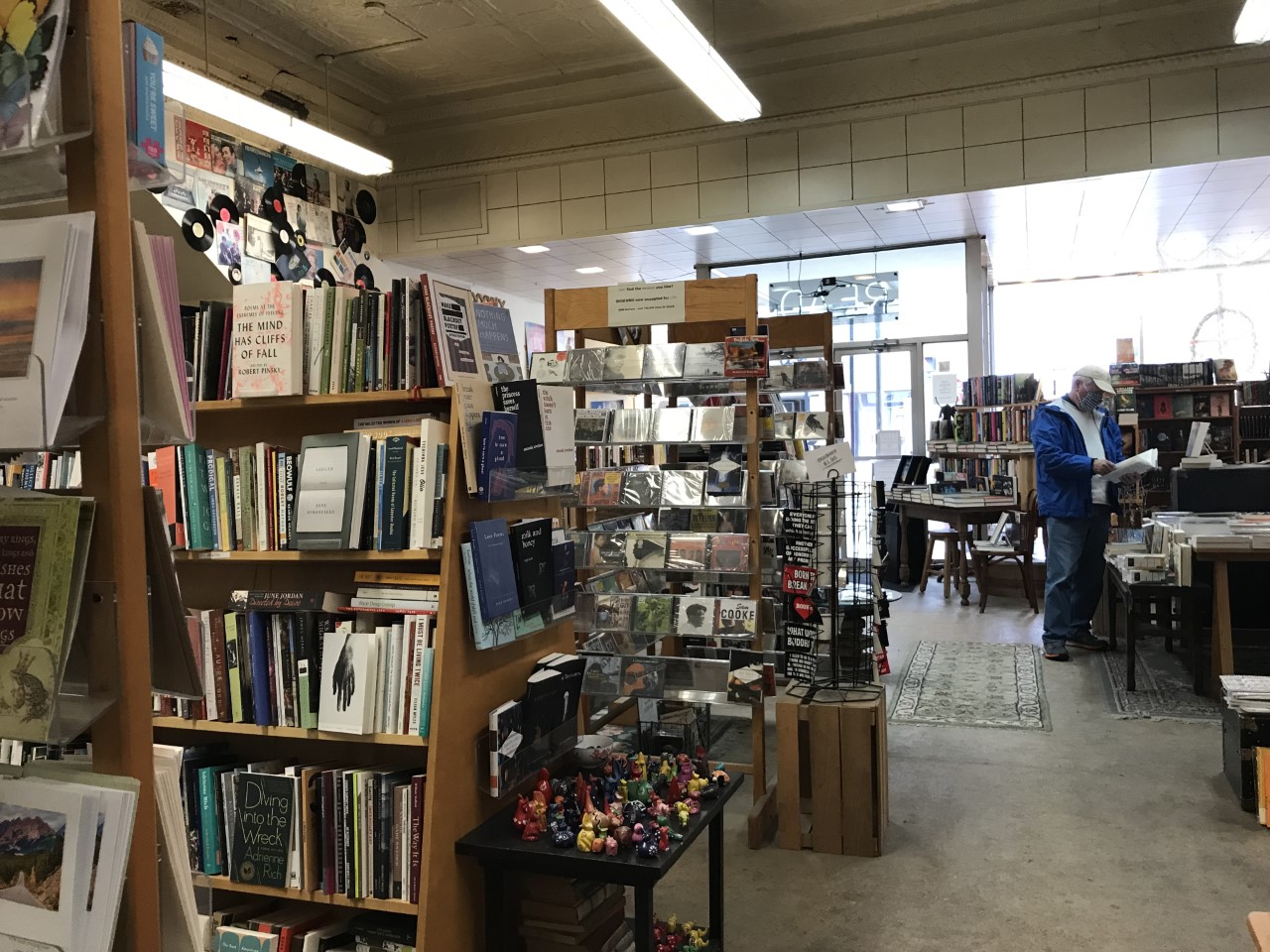 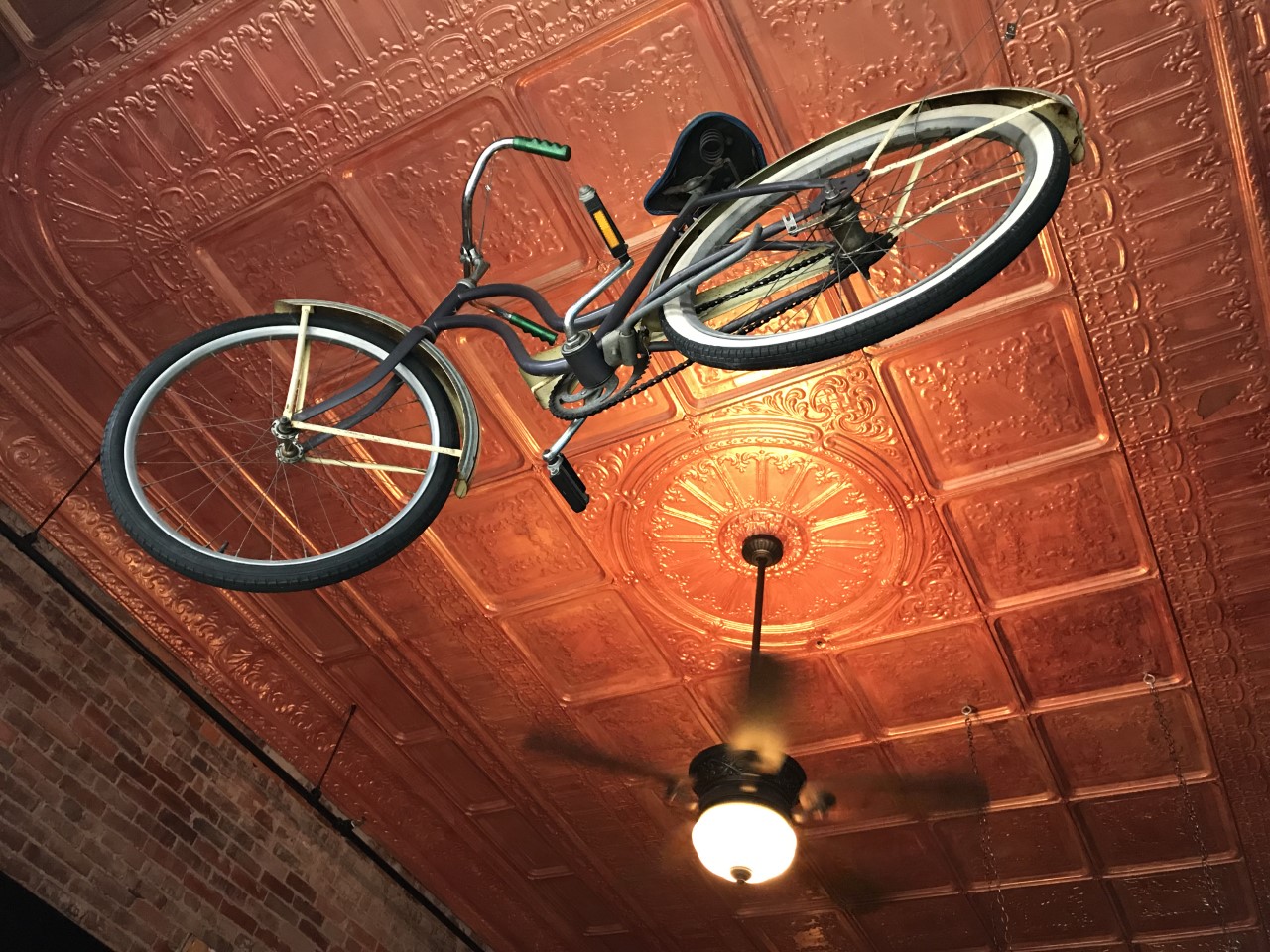 By the time we got to Frostburg, the rain was pretty heavy, so we didn’t do much exploring of the town like we did the first time around. Instead, we found two of our favorite kind of places to escape the rain. We explored the Main Street Bookstore and bought some books. We did some wine tasting at the Toasted Goat Winery Tasting Room. It is part of the Gunter Hotel built in 1897.  The original hotel had a café, a barbershop and a petting zoo, complete with a tame deer. It was nice to see how the buildings along main street continue to adapt and get a new or renewed life. The tin ceiling in the tasting room was a favorite. 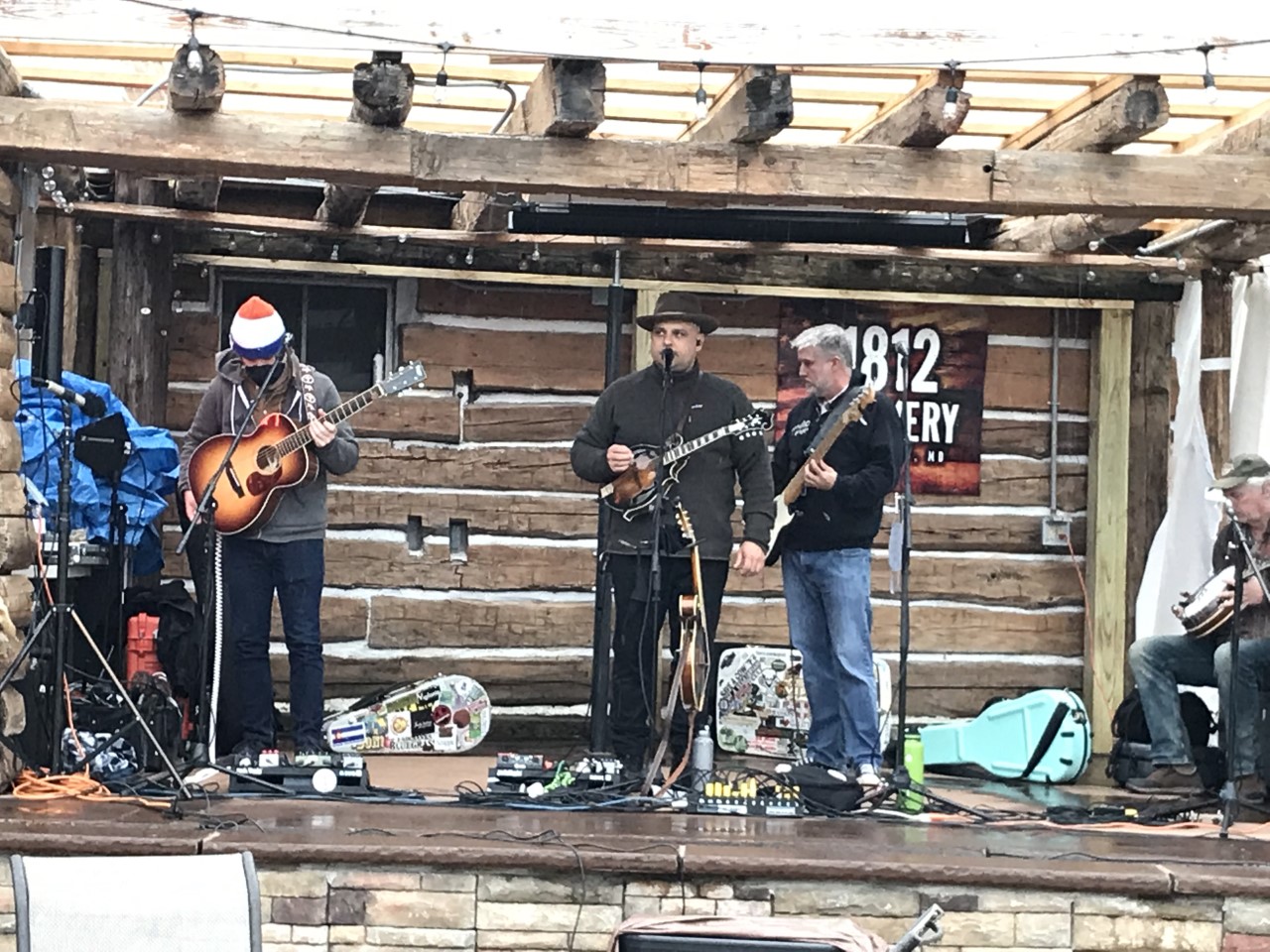 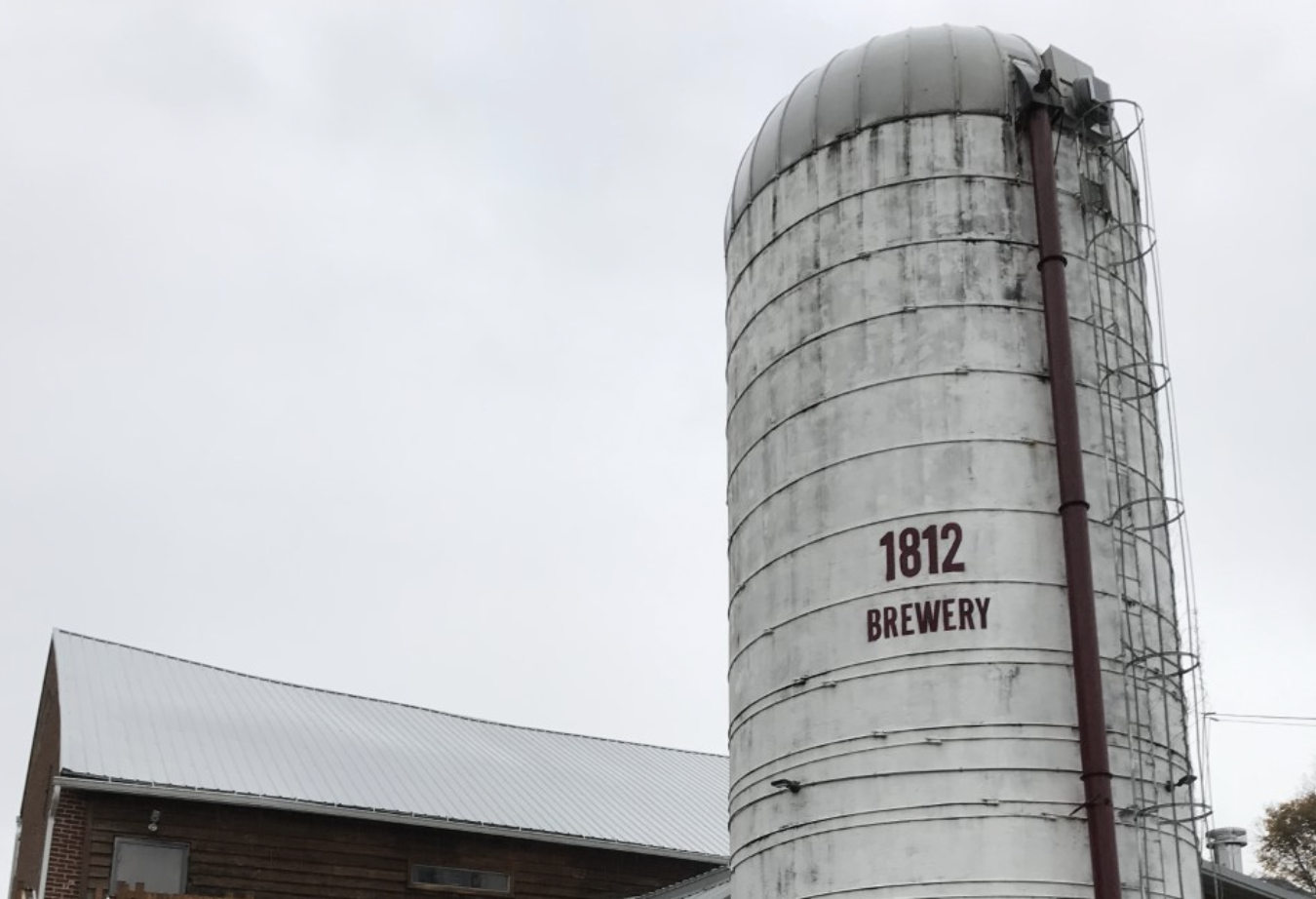 We finished with a stop at 1812 Brewery, located outside of Cumberland, in a repurposed barn built in 1812 that was converted to a brewery. It has its own hops growing trellis system towering 20 feet high. Despite the weather, there was a bluegrass band playing on the patio, with an outdoor firepit and fireplace to help stave of the cold. Not to mention they had some beers with creative names including Hay Day IPA, Fence Mender Pale Wheat, Farm Use Lager and Udderly Delicious Milk Stout.

That was a wrap of our adventure in Allegany County and proof that rain cannot stop a fun day!