Preservation Maryland has a growing portfolio of battlefield preservation projects comprising a new program. Today, the program is gaining traction and building capacity to support the preservation of these sites across the state and to inform and encourage broad and diverse interpretations of the many people who were impacted by the battles – from the soldiers to the enslaved.

One of the joint goals of Preservation Maryland’s battlefield program is to document lesser-known fields of conflict – and identify opportunities for interpretation that are supported by local landowners and residents.

Central to the ability for us to return to these hallowed grounds is preservation; which is one of the primary reasons that Preservation Maryland has recently launched its own battlefield preservation program aimed at helping to preserve, rehabilitate and interpret some of the state’s most iconic places — and to make certain that the stories told are comprehensive and inclusive of their long histories.

MORE WAYS TO GIVE

BATTLEFIELD WORK ACROSS THE STATE 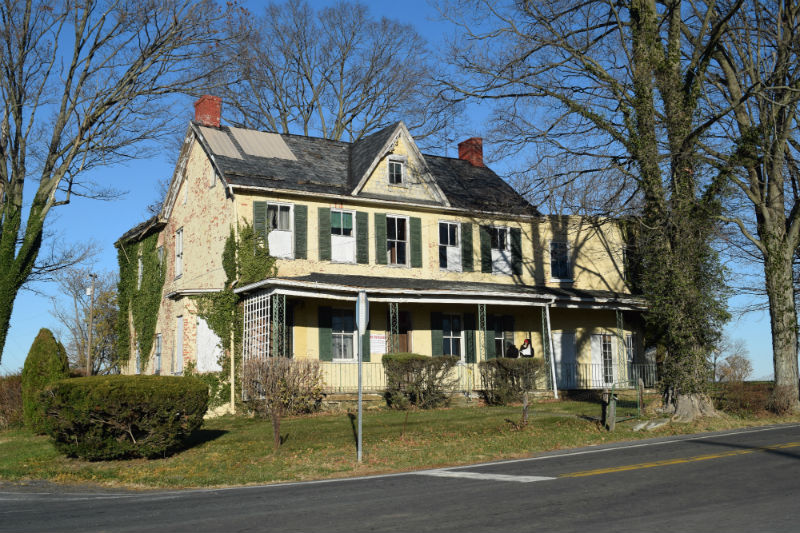 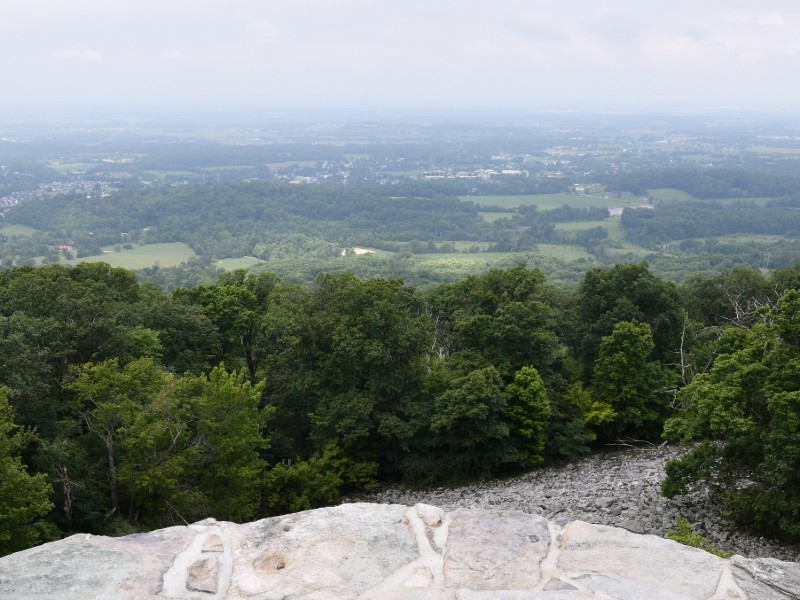 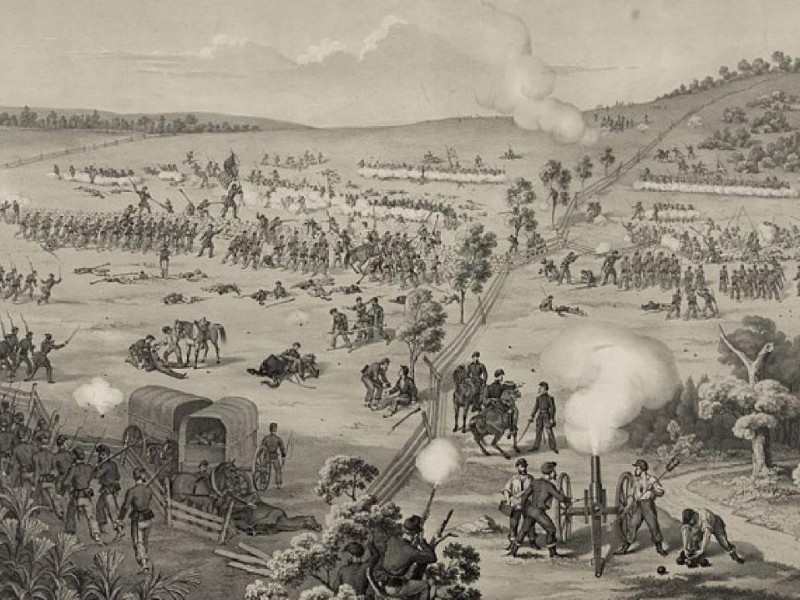 Historic illustration of the fighting at South Mountain.

Then Preservation Maryland partnered with the Maryland State Highway Administration to launch an in-depth archaeological study of Crampton and Fox’s gGp on the battlefield – with the results of that study to be published in early 2021. Additionally, the organization supported the stabilization of the Shafer Farm, the battlefield headquarters at Crampton’s Gap of Union General William B. Franklin, and advocated for a $100,000 grant to support the rehabilitation of the site.

With the continued support of the American Battlefield Protection Program, Preservation Maryland will now lead a re-branding effort for the battlefield, one of the key recommendations, to visually define the area and confusing terrain as a historic battlefield and to help orient visitors and create a seamless visitor experience. 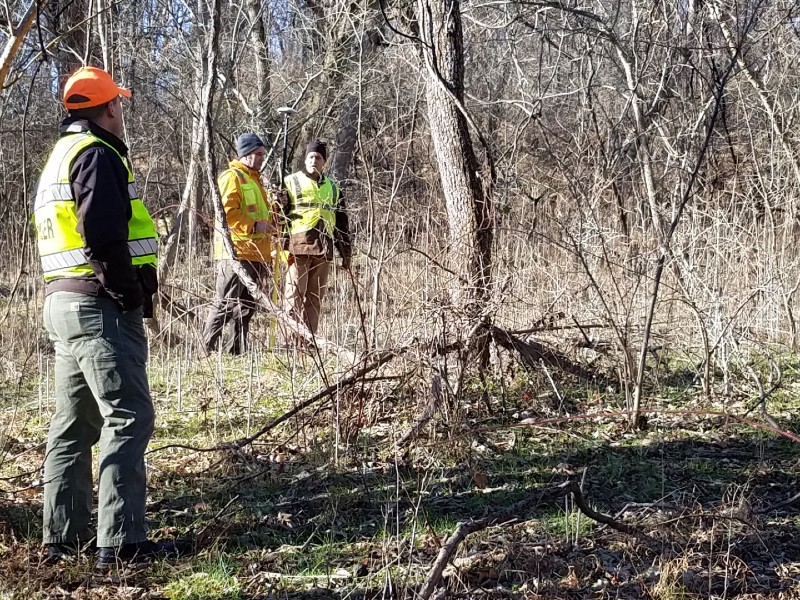 Example of what Fort Tolonoway may have looked like.

Fort Tonoloway was built in 1755 in modern-day Washington County by Lieutenant Thomas Stoddert and men of the Maryland militia. Garrisoned for only a year, the Fort was abandoned in 1756 when nearby Fort Frederick was established. In the ensuing years, the precise location of the fort has been lost.

Contracted by Preservation Maryland,  Rivanna Archaeological Services recently completed one of the most in-depth and scholarly studies ever produced of life and history on Maryland’s eighteenth-century frontier and the interaction between local civilians, Native Americans, and military forces. Rivanna has also completed an in-depth military terrain analysis. Historic and modern maps are generously included in the nearly 150-page report.

The areas identified by our consultant that are most ripe for future archaeology rest entirely on publicly owned land – an ideal outcome that provides an opportunity for investigation and excavation. Preservation Maryland will continue to work to secure the necessary funds for the next phase of this project – and to finally find Fort Tonoloway. 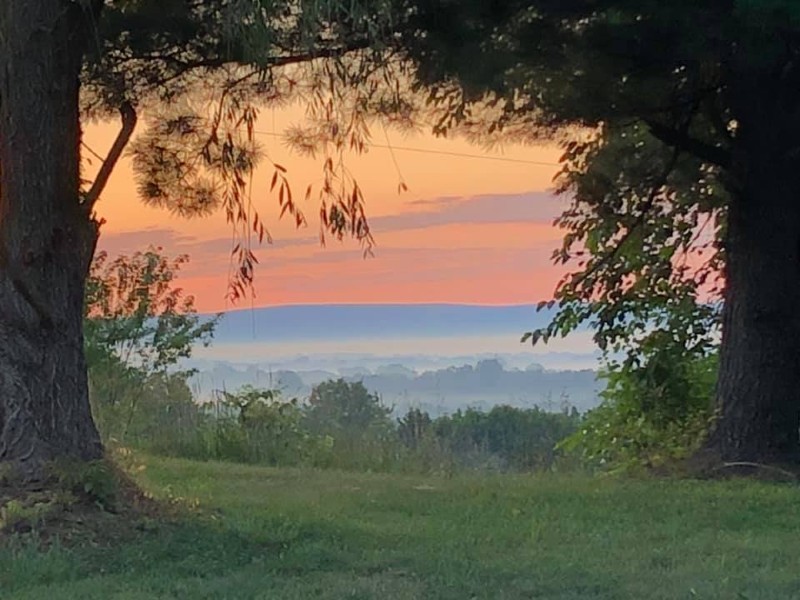 Photo from Save Falling Waters 1803 Battlefield. 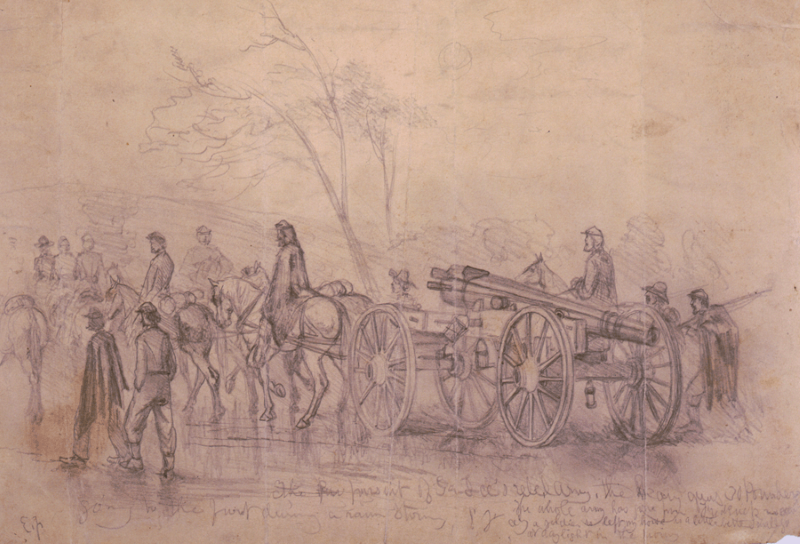 The pursuit of Gen. Lee’s rebel army after Gettysburg by Edwin Forbes. Library of Congress.

The Battle of Falling Waters, also known as the Battle of Williamsport and Battle of Hagerstown, occurred in July 1863 across swaths of Hagerstown, Williamsport and the Potomac River crossing. Preservation Maryland’s project here will prepare a strategic vision and plan for the protection of the battlefield (specifically the core battlefield land adjacent to the Potomac River crossing and the approach from Williamsport) while also considering the preservation of the Donnelly House as a resource for potential public or public/private use. The Donnelly house served as a makeshift Confederate headquarters and hospital during the prolonged battle and is located on a critical portion of the battlefield.

Preservation Maryland has selected Hanbury Preservation Consulting to complete a preservation project at the Falling Waters Battlefield in Washington County, Maryland. The project is funded by the American Battlefield Protection Program and is now in the public participation phase and two virtual public input meetings will be held in November 2020 to assess local interest in protecting sites on private property and develop a detailed plan based on this input and findings.

The final product will be a report on the consensus-building process, conclusions, recommendations, and protection strategies for the Battle of Falling Waters. It will include the collection of GIS mapping data for natural and cultural resources as well as protected lands. It will also include a detailed historic context about the battle. The project will be developed and deliverables produced during the period of January 2020 through February 2021. Updates will be provided on Preservation Maryland’s websites.

SUPPORT OUR WORK AT FALLING WATERS 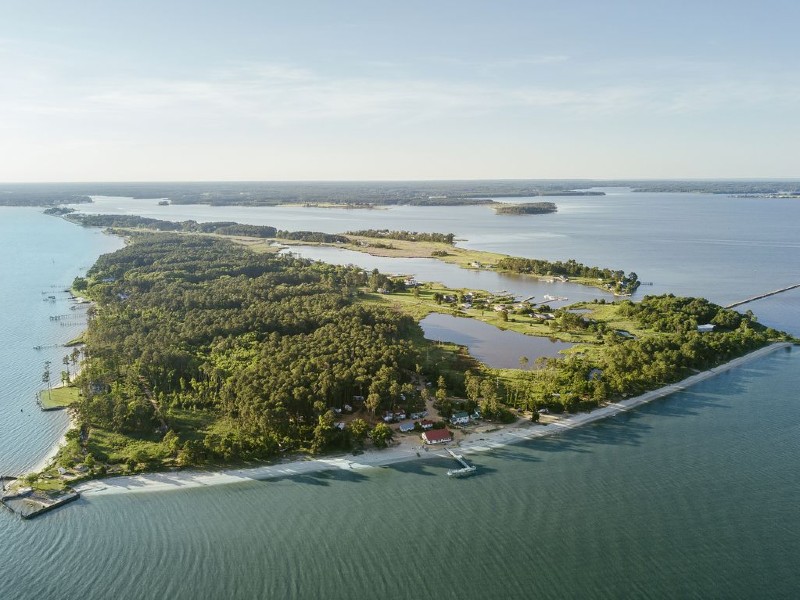 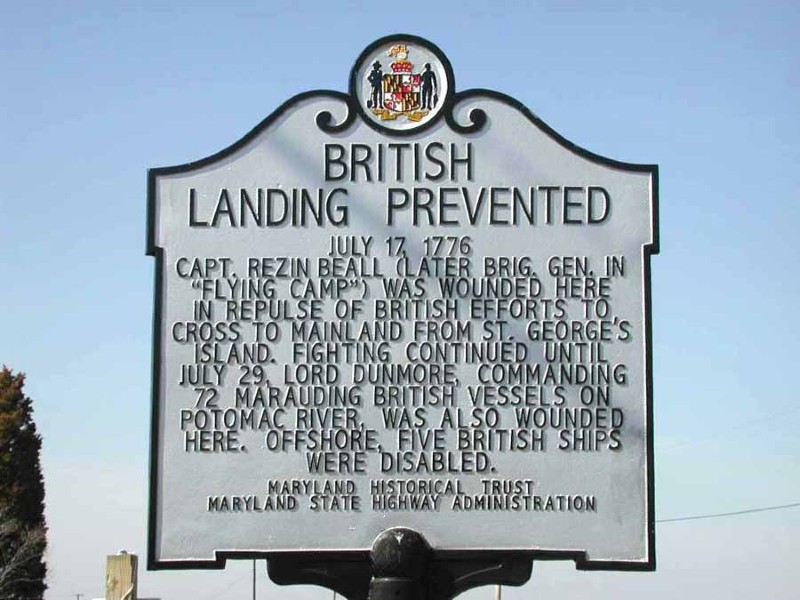 In St. Mary’s County, Maryland, St. George’s Island is the site of a long-overlooked Revolutionary War battle where on July 17, 1776 the Maryland militia pushed the Colonial Governor of Virginia, John Murray, 4th Earl of Dunmore, back to the Chesapeake. Today, the island is a residential community and this study will develop a detailed context of the battle and scope the potential for limited interpretation as well as engage and understand what local residents would like for their community moving forward. The study does not fund land acquisition nor is any contemplated – it is a research endeavor that will also explore low-impact interpretive opportunities.

Preservation Maryland has partnered with the Southern Maryland Heritage Area on the project and retain a consultant to conduct an in-depth and authentic public engagement process and historic research. Out of many interested respondents to Preservation Maryland’s RFP, Kennon Williams Landscape Studio was selected as the lead consultant to be supported in the project by two sub-consultants: the Washington College Center for Environment and Society and Barton Ross & Partners, LLC Architects. 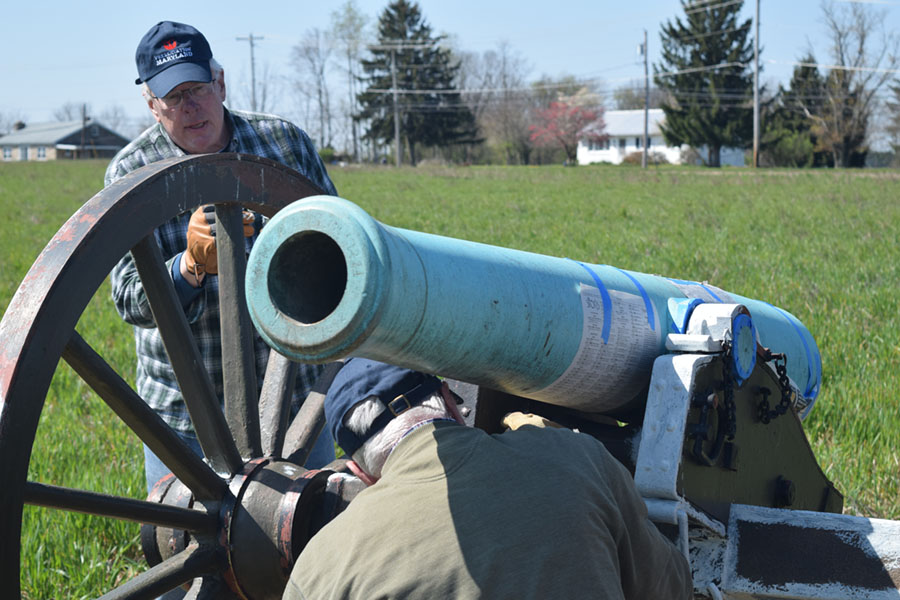 Repainting a cannon at Antietam. 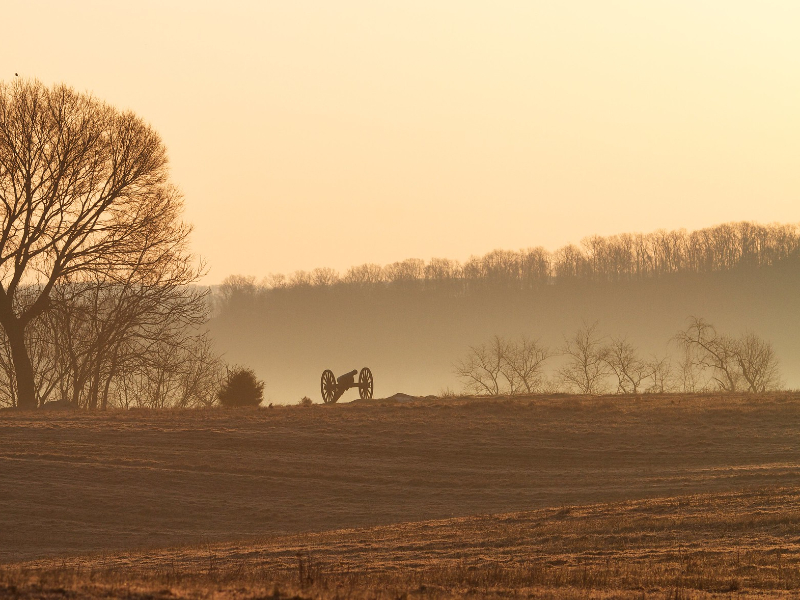 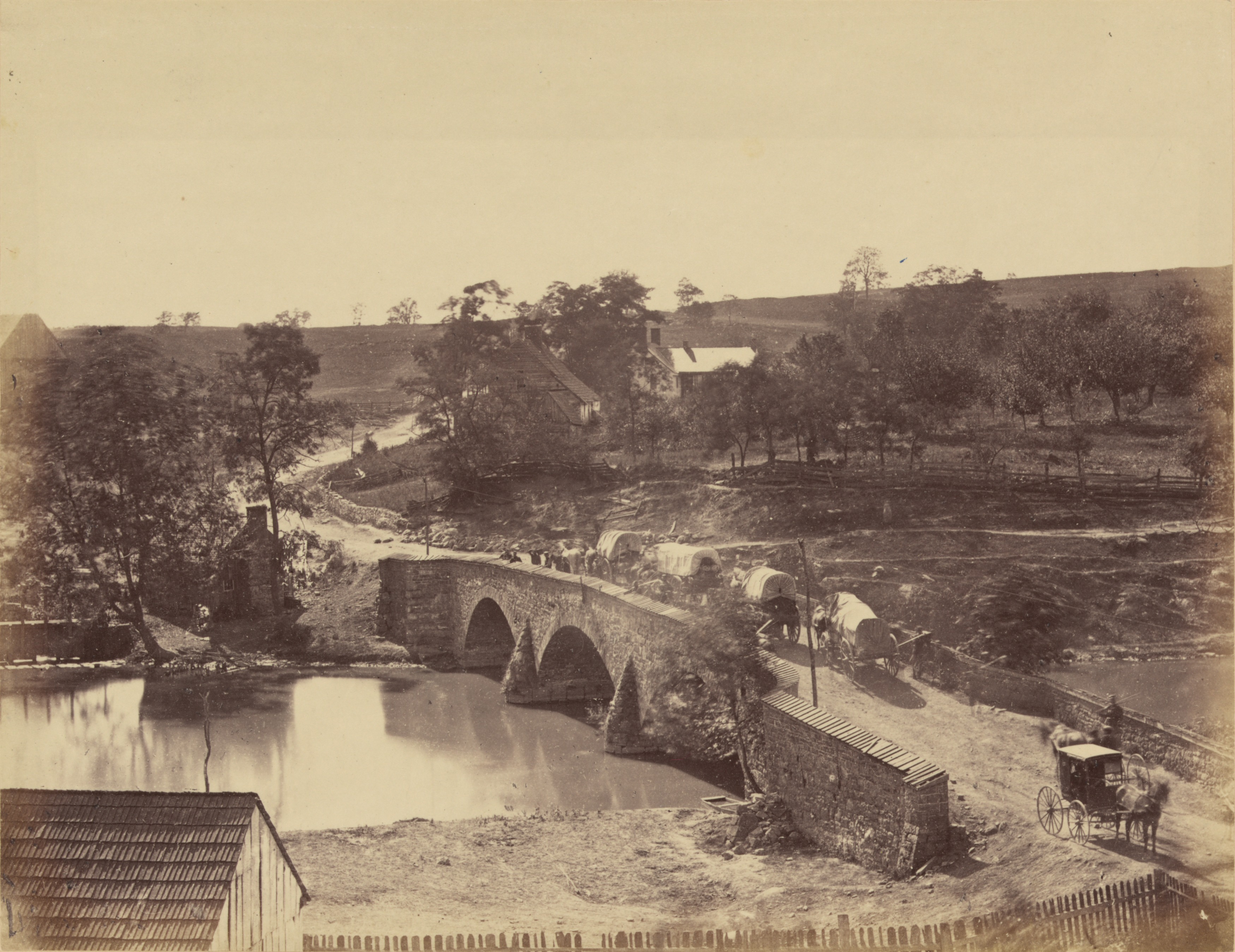 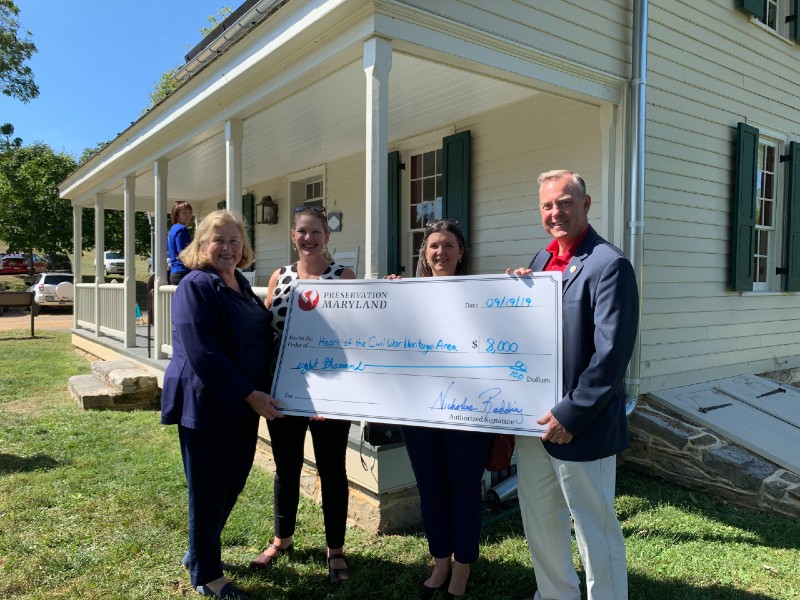 As America confronts the history and legacy of its Civil War, revisiting places like Antietam Battlefield, located in Sharpsburg, Maryland, helps uncover previously overlooked layers of history – from the farmers to the Dunkers and from the soldiers to the enslaved.

Preservation Maryland Executive Director Nicholas Redding recently visited the, to chronicle just a few of the site’s untold stories and unique layers of history on a video tour.

Moreover, Preservation Maryland has also helped fund The Heart of the Civil War Heritage Area to create a visitor experience plan for the historic Newcomer House on the Battlefield. The 18th-century home served as a makeshift hospital during the battle and is now a visitor center for tourists exploring Western Maryland’s history and scenery.

To learn more about Antietam Battlefield, please listen to these PreserveCast episodes: