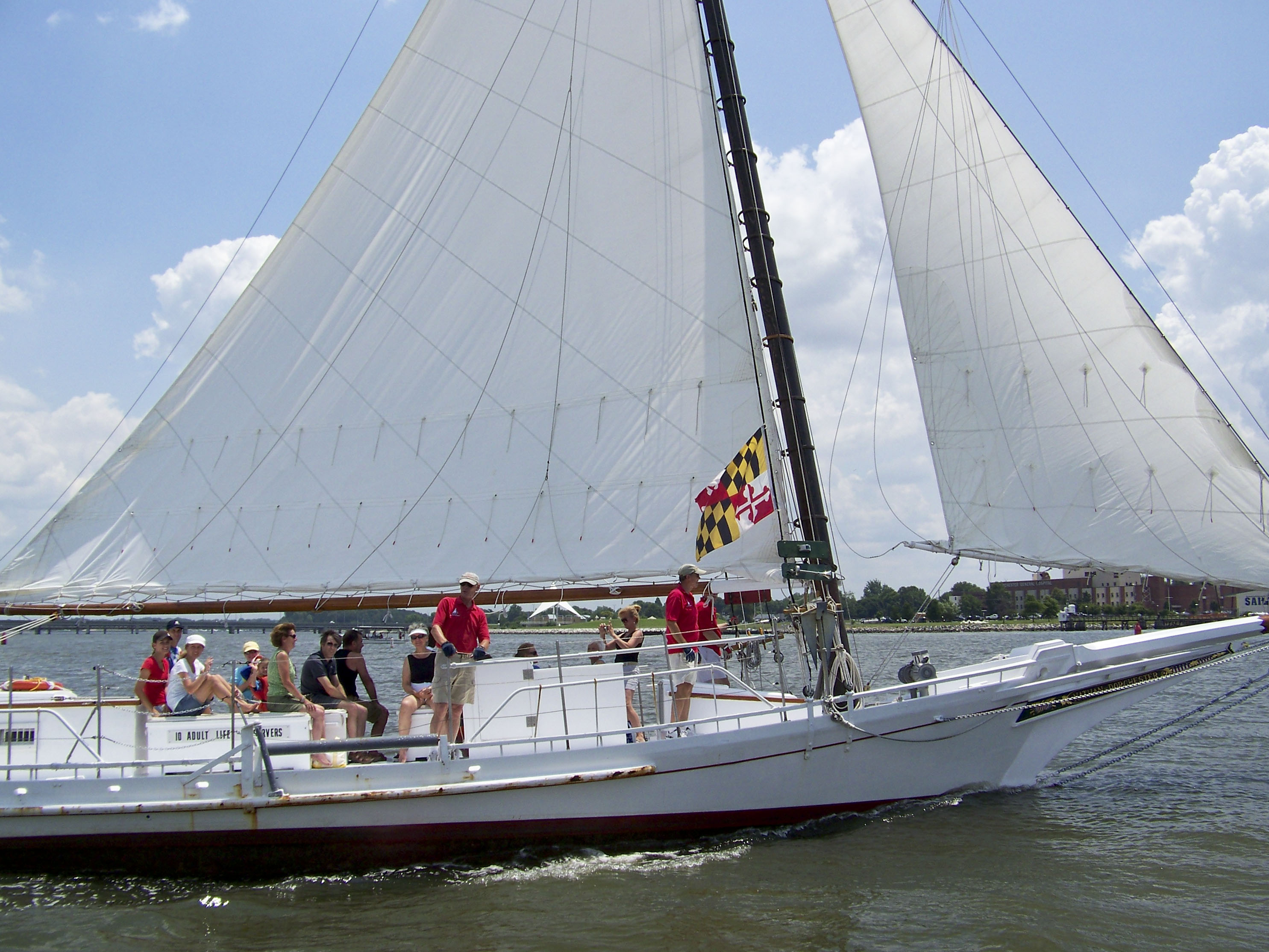 At the Helm of Maryland’s Last Skipjacks Project

Cyndy Carrington Miller is an inspired-Marylander, starting the Last Skipjacks Project in order to answer the question she most frequently heard as crew and first mate on the Skipjack Nathan of Dorchester: “How many skipjacks are left?”

Beginning in 2009, Cyndy set out around the Chesapeake Bay and beyond to find, document, research, and list as many of the skipjacks as possible – she found them on the water, in sheds and back yards, and museums. As a way to share her research and passion, Cyndy launched and consistently updates the website and Facebook page associated with her The Last Skipjacks Project.

SAIL AWAY WITH CYNDY:

[MEAGAN BACO] SO CYNDY, HOW MANY SKIPJACKS ARE LEFT!?

[CYNDY CARRINGTON MILLER] I wish I could say I’ve come up with a definitive answer, but the best I can do is say, “It depends” and “about…” It depends on what you are asking.

How many of the skipjacks originally built to be oyster dredge boats still are visible in some shape or form? About 36, although some of them are wrecks or museum exhibits. If you add in the full-size skipjacks that originally were built to be pleasure craft, the total comes to about 45 that I’ve located. I’ve also found some smaller skipjacks, day sailers often called “baby skipjacks,” that are included on the website, although that list is in no way complete.

If you are asking how many full-size skipjacks, whether built for dredging or for pleasure, still are on the water? About 31. How many skipjacks are doing any dredging this season? Probably about 17.

Ask me tomorrow and you may get different answers! This is why I decided to do the website instead of a book—the numbers and status of the boats kept changing. Five skipjacks have been lost completely since I began this project, with another currently being dismantled. Yet there are a couple guys building a brand new skipjack in their back yard in Dorchester County. 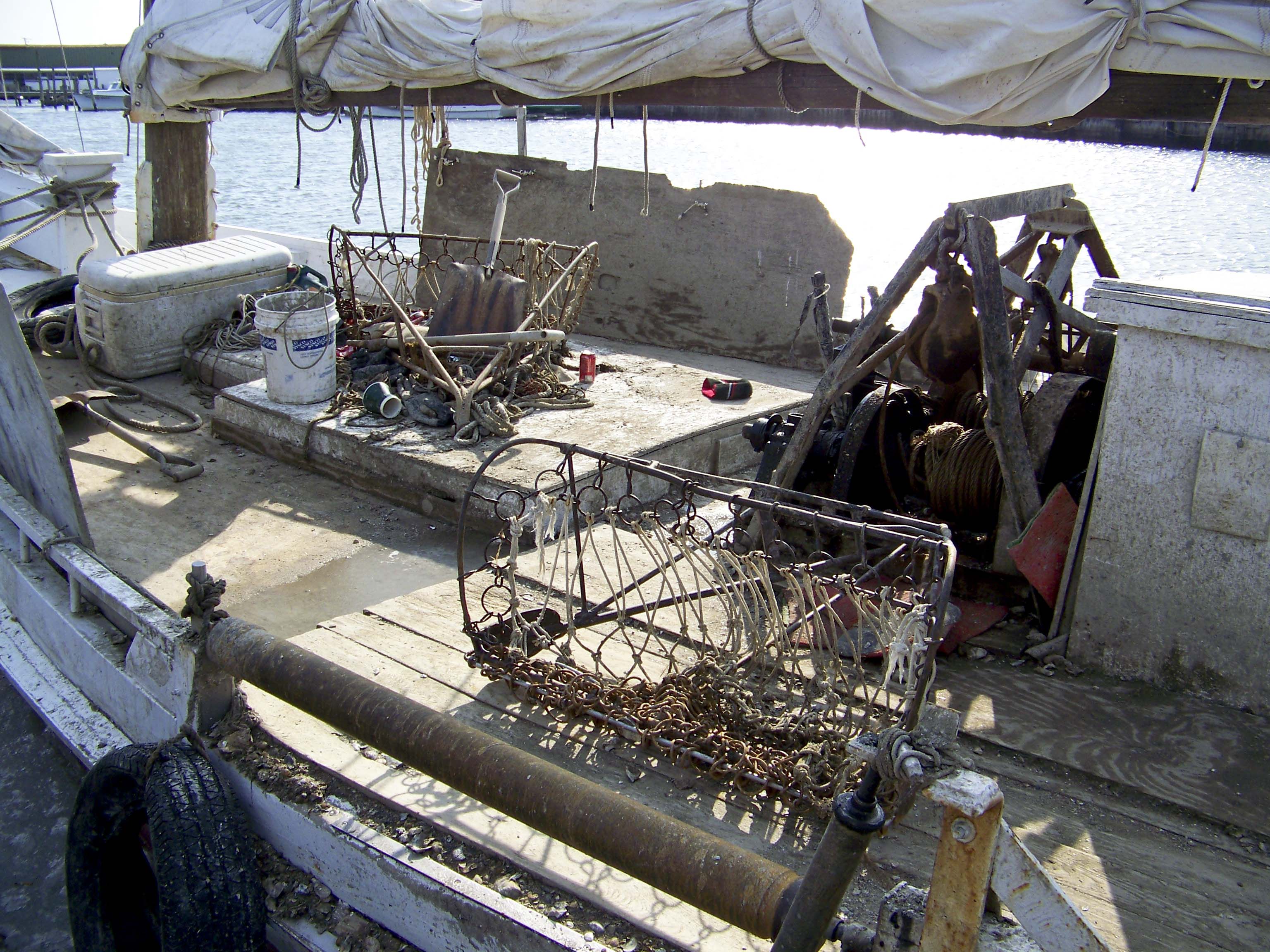 During oyster season, commercial skipjacks like Somerset look like the working dredge boats they were meant to be. 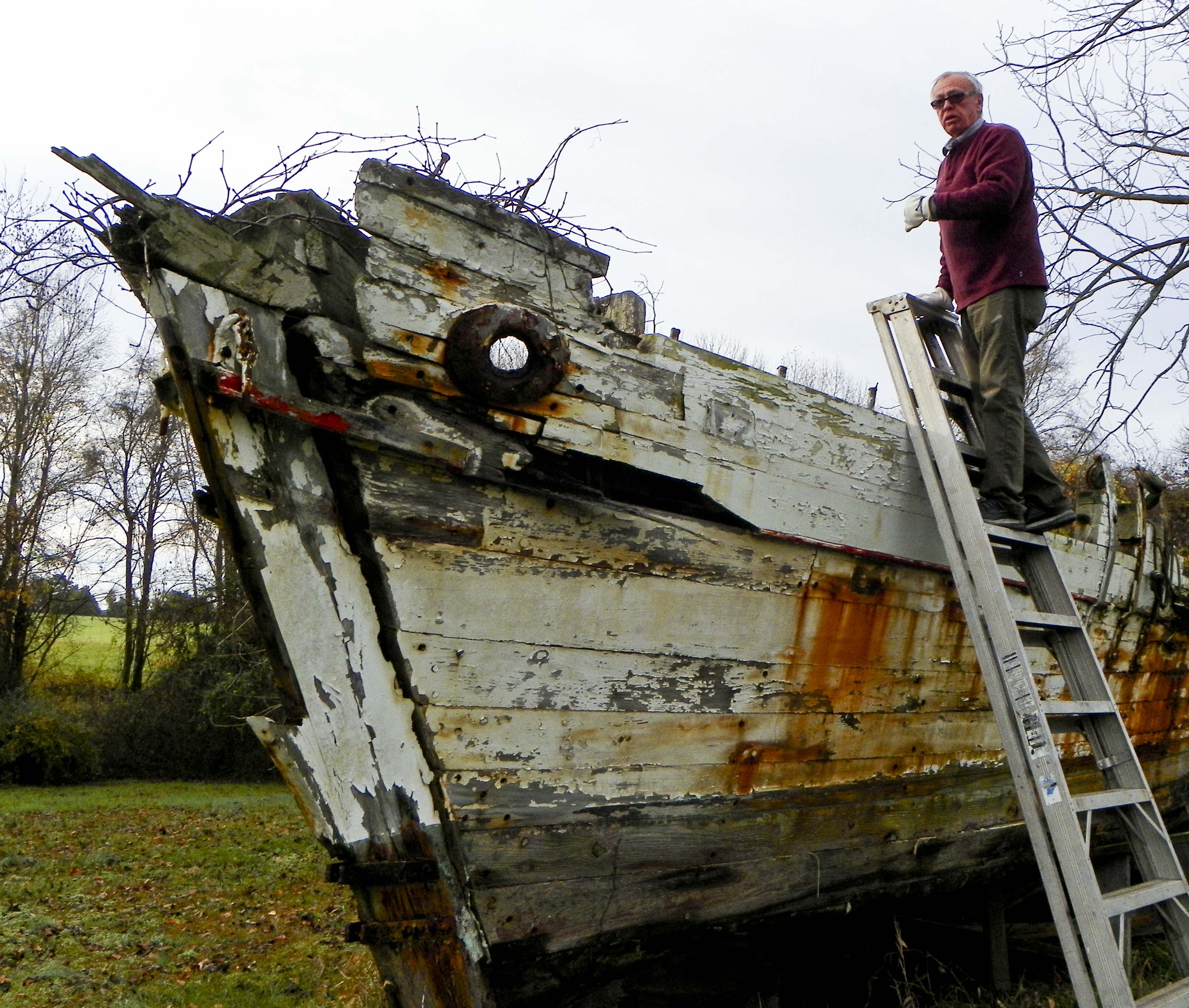 Capt. Stoney Whitelock is in the process of dismantling skipjack Mamie A. Mister in hope that one day she may be rebuilt using some of the salvaged pieces. 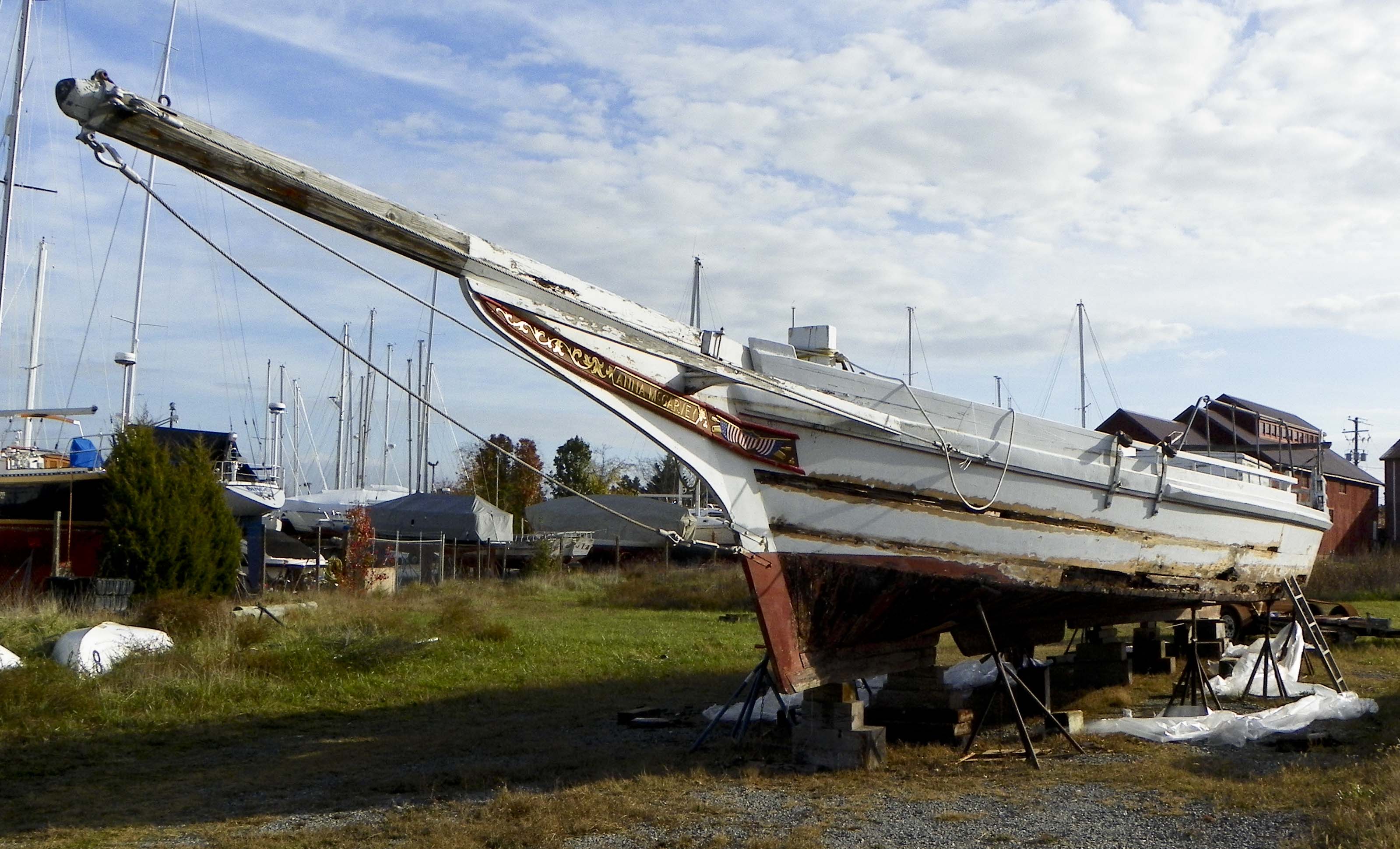 Skipjack Anna McGarvey is now privately owned and being restored in Cambridge.

[MB] WHAT’S THE STATUS OF SKIPJACKS ON THE CHESAPEAKE? ANY TRENDS? WHAT ARE YOUR HOPES FOR THEM IN THE FUTURE?

[CCM] I’m afraid for them, which is why I began this project, to document the remaining boats before they disappeared. When I started back in 2009, there were only about five skipjacks dredging commercially that season. Oyster harvests were at disastrous lows due to disease, pollution and overharvesting.

With oysters rebounding a bit in recent years, some of the watermen—both old hands and newcomers—have put some of the skipjacks back to work and even turned a few of the recreational skipjacks into dredge boats. Whether they will survive the inevitable next downturn is a big question.

In recent years, interest in the heritage associated with these boats has led to a number of them being retasked or multi-tasked into tourist vessels, taking passengers out for charters and public sails in the summer months. While this will keep some of the skipjacks alive, there are others that will take so much work to bring them into Coast Guard compliance for safe passenger vessels that the cost would be prohibitive.

The best news is that there are organizations and groups of dedicated people who are working hard to save some of these boats. Deal Island Skipjack Preservation has been involved in the restorations of Kathryn and Helen Virginia and now is working on George W. Collier. The Coastal Heritage Alliance has been instrumental in restorations of quite a few of the boats.

[CCM] I’m a transplanted Pennsylvanian who had absolutely no experience with boating or sailing before moving to the Eastern Shore in 1999. A friend was visiting in the fall of 2001 and we saw in the newspaper’s calendar of events that the Skipjack Nathan of Dorchester had a public sail that day. We went out for a sail and I volunteered for crew training the next spring. I fell in love with the boat and ended up spending thirteen seasons on her.

Traveling around the Chesapeake Bay on the Nathan for races or special events, I came into contact with many of the other skipjacks. These wooden boats with their raked masts and huge main sails always struck me as so beautiful and unique. I wanted to help keep them alive.

[MB] SEEMS LIKE EACH SKIPJACK HAS A STORY. WHAT ARE SOME OF YOUR FAVORITES?

[CCM] Some of the skipjacks date back more than a hundred years and have wonderful histories, although many of the early stories have been lost to time. A lot of the skipjacks have had numerous lives.

George W. Collier was built in 1900 at Deal Island and worked for more than half a century as a dredge boat before being bought by Allegheny Beverage Corporation. They renamed her Allegheny, rebuilt her and used her as a promotional vessel for the company. The City of Norfolk later acquired her, renamed her Norfolk, and used her to train Sea Scouts and as an ambassador for the city. Next she went to a non-profit organization that planned to restore her, but ended up letting her sit on land in Cape Charles, Virginia, for years. Now, Deal Island Skipjack Preservation has brought her back home to Deal Island for restoration, including her original name!

Barbara Batchelder is one of the few that have lived just one life. She was built in 1956 by Bronza Parks in Dorchester County as a private yacht for Irénée du Pont Jr. and Mr. du Pont, now in his mid-90s, not only still owns and sails her out of Rock Hall, but still owns the 1936 Oldsmobile he drove down to meet with Bronza to arrange for the skipjack’s construction.

Anna McGarvey is one of the youngest skipjacks. She was built in 1981. They were completely rebuilding the skipjack Minnie V alongside of her at the same time and rumor has it that they lost track of which boat was which. Once completed, Anna McGarvey only dredged for a short time. After one of her crewmembers drowned, she was donated to the state of Maryland and used for the oyster propagation program until 1988. It was on her deck that Governor Harry Hughes made the skipjack the official state boat of Maryland! After sitting as a land exhibit since 1999 at the Chesapeake Heritage and Visitor Center on Kent Island, a waterman bought Anna McGarvey and brought her down to Cambridge last year. She’s now being restored, with plans to put her back to work as a commercial dredge boat.

[MB] WHY DO YOU THINK THAT THE COMMUNITY, ONLINE IN PARTICULAR, HAS BEEN SO ACTIVE AND POSITIVE ABOUT YOUR PROJECT?

[CCM] Over the years, I had gathered all these stories and details, and even after I left the Nathan I still would get calls asking if I knew anything about such-and-such a boat. I thought there needed to be one site online where people could go to find this information. After all, it’s not mine. It’s history. It belongs to us all.

When I first started the website and Facebook page, I wanted them to be an exchange where people who are interested in skipjacks or who knew some of those “lost” stories could learn and share information.

I’m delighted at the response and how it’s working. People are contacting me through the website or commenting on Facebook, adding to the stories I already have and filling in details. As I add the histories of each boat on the website, I’m including those details, which really make the stories come alive.

Especially with the renewed interest in skipjacks and bringing back more of the dredge boats, I think it has struck a chord with people and, I hope, is encouraging more support for them. I’m happy to post notice of any fundraising events for the boats or other ways people can help both the non-profit-owned and privately owned skipjacks. 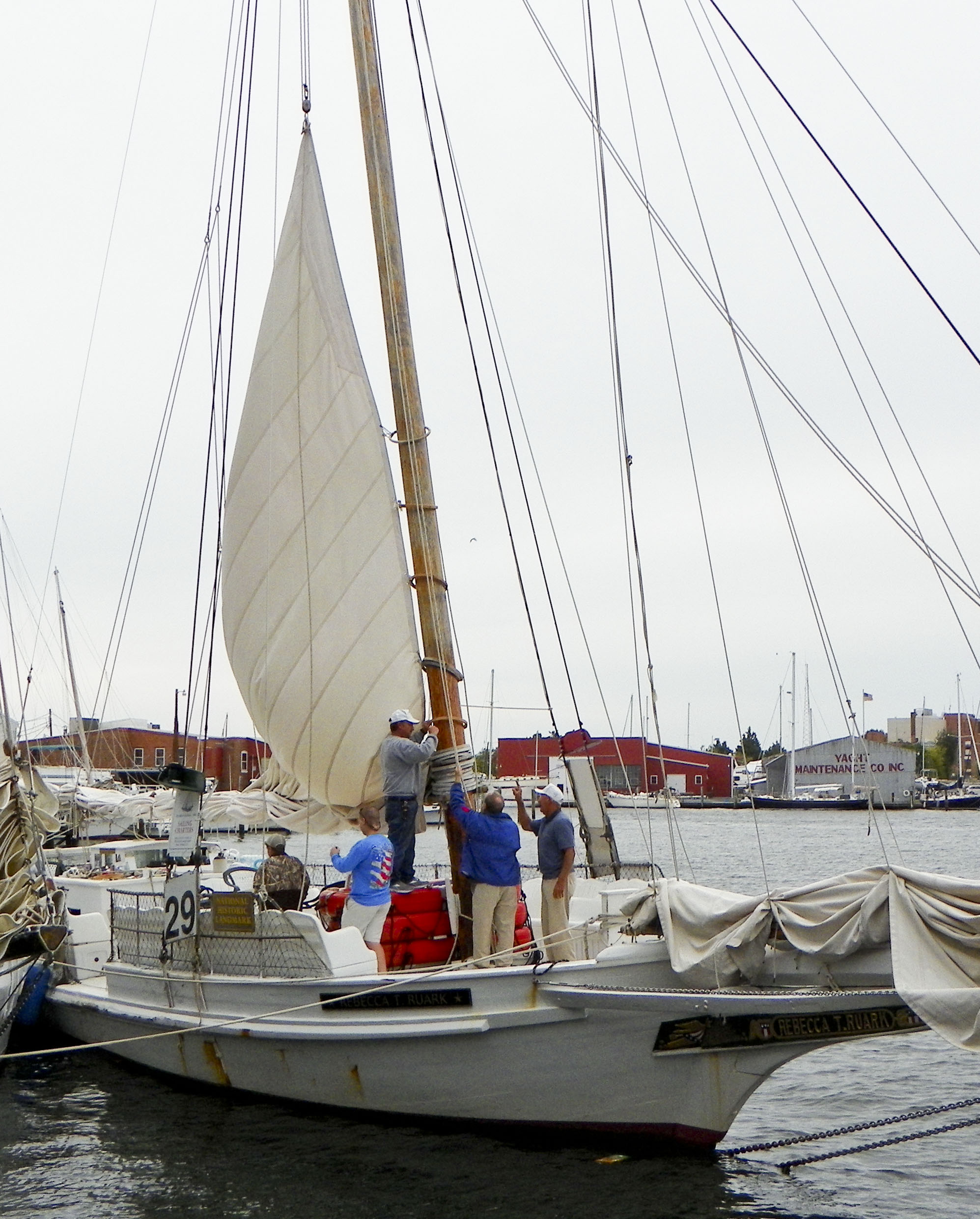 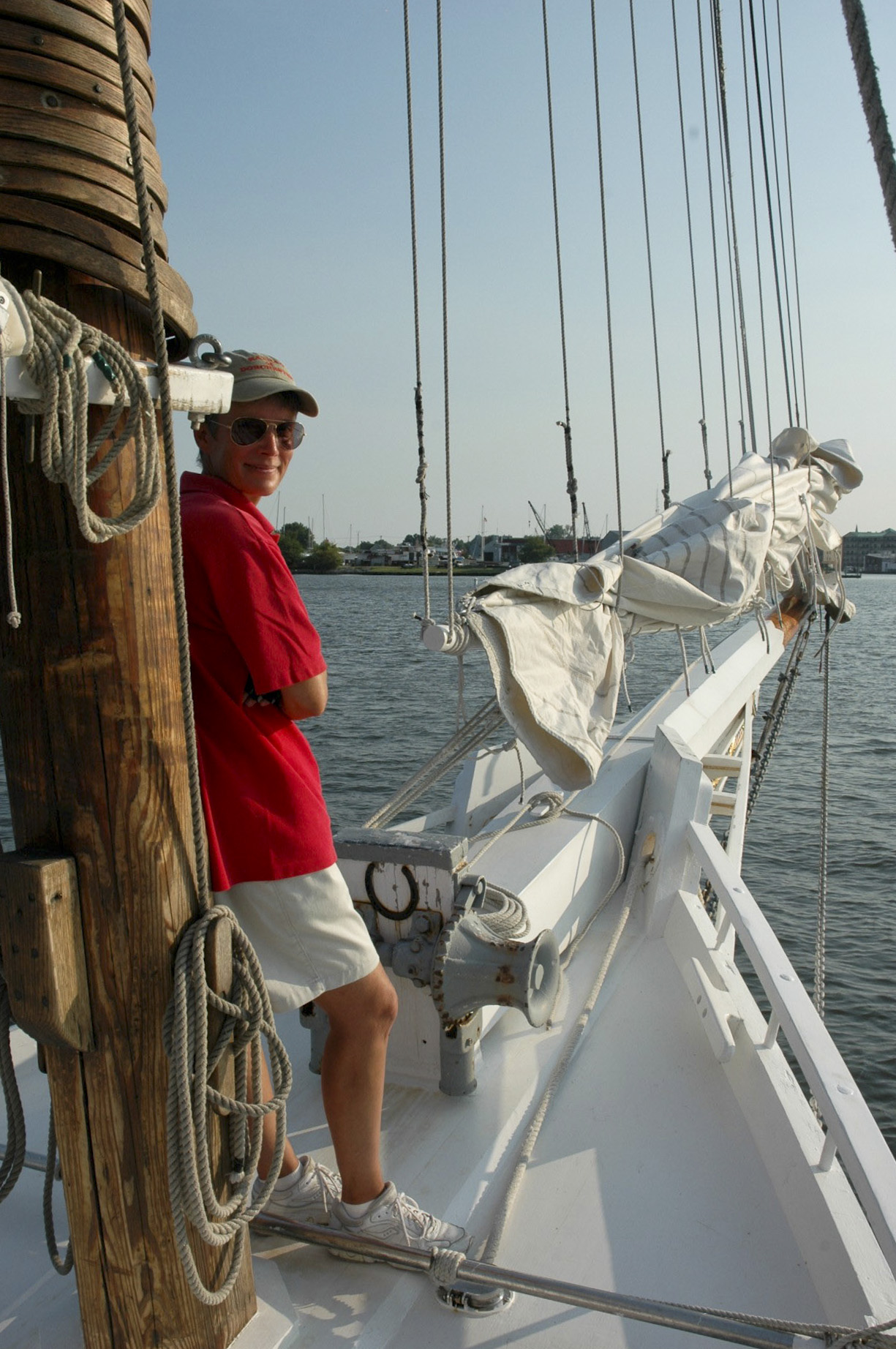 Cyndy Carrington Miller at the mast of Nathan of Dorchester.

[MB] ANY ADVICE FOR FOLKS THAT WANT TO GET INVOLVED WITH SKIPJACKS – OR, MORE IN GENERAL, STARTING THEIR OWN RESEARCH PROJECT ABOUT MARYLAND?

[CCM]There are so many ways people can get involved with skipjacks! These are wooden boats and constantly need work, even when not being rebuilt. People always are needed to help with maintenance or woodworking, even on the privately owned boats. Those owned by non-profit organizations also welcome volunteers as crew or docents. You can charter some of the skipjacks for private sails and some offer regularly scheduled public sails. Donations, of course, always are welcome! You can find links to most of their websites on the Last Skipjacks Project site.

As for starting one’s own research project, all I can say is to follow your passion. You never know where it will lead!

[MB] LASTLY, WHEN , WHERE, AND HOW CAN MARYLANDERS GET ON THE WATER WITH YOU AND THE SKIPJACKS?

[CCM] Some of the Maryland skipjacks, both non-profit and privately owned, that are Coast Guard certified passenger vessels and offer regular public sails, group charters or trips for school children include Dee of St. Marys at the Calvert Marine Museum in Solomons Island, Elsworth at Echo Hill Outdoor School in Worton, H. M. Krentz in St. Michaels, Nathan of Dorchester in Cambridge, Rebecca T. Ruark at Tilghman Island, and Sigsbee in Baltimore. Martha Lewis in Havre de Grace will do so again once she is restored. Many other privately owned skipjacks offer trips for smaller groups.

1. FAVORITE PART OF THE STATE?

The Eastern Shore. Even as a kid visiting the Delaware beaches from Pittsburgh for summer holidays, I always felt like I was coming home when I arrived on the Eastern Shore side of the Bay Bridge.

The skipjacks! Not too many people realize that the Chesapeake Bay skipjack fleet was recognized for its historical importance in 1985 when 24 skipjacks were listed on the National Register of Historic Places.

I’m not a gourmet. There are so many wonderful local restaurants where I live in Talbot County, I always think the last one I ate in was the best!

Now, here is where I guess I lose all the Maryland followers of my website, since I have to admit I had never heard of either one until you asked!

Old Bay. I’m half Polish and even sprinkle it on pierogies!