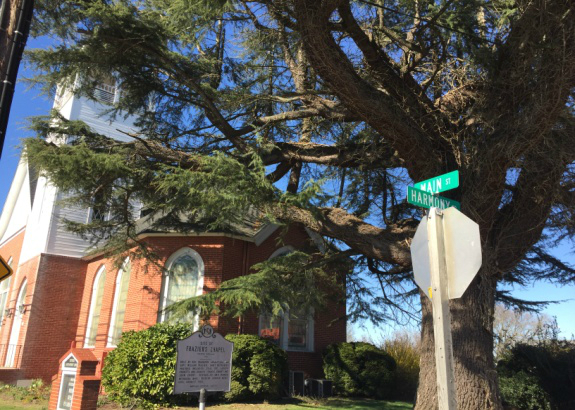 On their sixth county of their 24-month and 24-county journey, Preservation Maryland supporters Diane and Jeff Caslow, head to Caroline County on the Eastern Shore for what they’re calling Main Street March Madness. Explore with them in the blog below:

FROM DIANE CASLOW, BOARD MEMBER

Caroline County was created in 1774 from parts of Dorchester and Queen Anne’s Counties and was named for Lady Caroline Eden, wife of Maryland’s last colonial governor, Robert Eden. As Caroline County is one of the lesser populated counties in Maryland, and one that we had typically just driven through on the way to the beaches, we were curious to see what we would find. According the to the Caroline County Office of Tourism website, it “has many small towns with plenty of charm, hospitality and friendly faces – explore our towns!”

Every year as winter dissipates, basketball fans look forward to March Madness, so we thought we would do our own kind of madness, and see what we could find on the Main Streets of Caroline County.

THE MAIN STREETS OF CAROLINE COUNTY 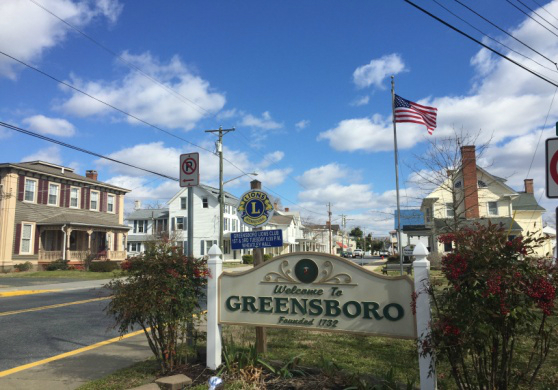 A brisk March day for a history road trip.

The first was the Town of Hillsboro, historically an important tobacco-trading center on the Tuckahoe Creek and looks like someone has carefully restored a number of buildings. Frederick Douglass was born near Hillsboro and we found a historical marker at the Hillsboro Landing, now a place where you can put in kayaks and canoes for a paddle down the creek.

Next was the Town of Ridgely, which boasts the Caroline County’s first rail line – now being transformed into a trail for hikers and bikers.

We stopped in the Town of Greensboro for breakfast at the D&R Restaurant, fortifying ourselves with corned beef hash. 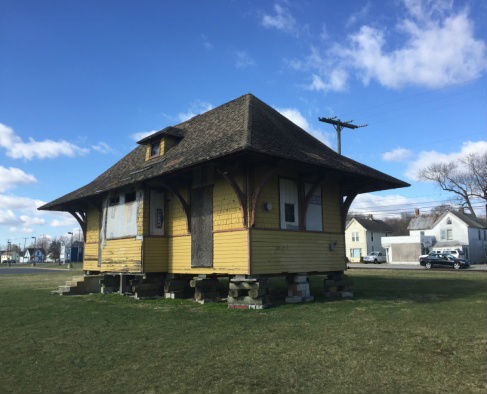 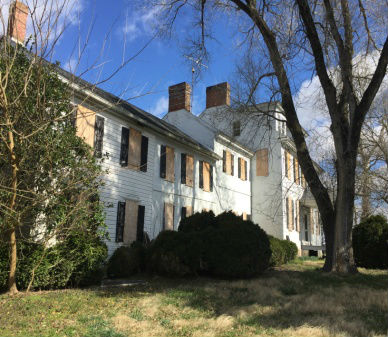 Back on the road, and near the Town of Goldsboro, I soon spy a beautiful old mansion across the farmland that is boarded up with an old for sale sign. I am drawn to these kinds of places so we drive in to take a closer look. As we sit looking more closely at the house, Jeff looks up the particulars on Wikipedia: Castle Hall, originally built in 1781 by Thomas Hardcastle, is a three-part telescoping house, so called because it was built in stages, with each successive addition being smaller than the previous one. Historically, Goldsboro was a beaver pelt trading center as four major indigenous paths converged in town. Another reminder of the importance of railroads, we find a railroad station jacked up on cinder blocks, next to the old rails, waiting for a new life.

As we drive through the Town of Henderson and see a quiet town waking up in the early afternoon and take a turn towards the headwaters of the Choptank River. Sure enough we find it, but I am wondering why the sign says Delaware…well, the Mud Mill Pond, straddles Maryland and Delaware, and is beautifully pristine.

Our final three towns are the Town of Denton, the Town of Federalsburg, and the Town of Preston. Denton, the county seat, was founded in 1781. It is clear that the town is remaking itself with an arts district and artisans rehabilitating some of the older buildings in town, including a Fiber Arts Center of the Eastern Shore. We spend some time shopping in the arts district at the Fourth Street Gallery and the Foundry Gallery. We learned more about the history of the area first-hand from the owners of the Fourth Street Gallery, including the current fate of Castle Hall.

We checked out the Museum of Rural Life. We marveled at portions of homes that were saved, moved and rebuilt inside the museum to show examples of what rural life was like on the shore between the late 1700s and early 1800s. 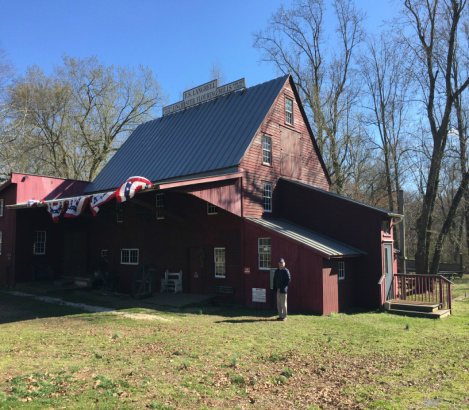 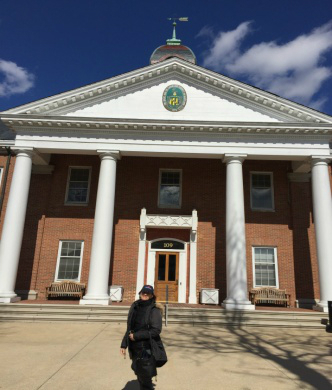 Diane at the Caroline County Courthouse, 2017.

We had lunch at Market Street Public House, a hopping Irish Pub on a Saturday afternoon. It is clear that someone has taken the time to retain the beautiful old features of the building and adapted it for continued use. Jeff is fascinated by the Caroline County seal on the Courthouse, which includes parts of the Calvert coat of arms and motto in Latin which means “Land of Pleasant Living.”

The Town of Federalsburg is at the southern-most part of the county, surrounded by hardwood forests. It was known for shipbuilding and sawmills, sitting on the Marshyhope Creek.

On our way to the Town of Preston, we stop at the Linchester Mill Campus, a restored flour mill that stand the test of time as there has been a mill on the site since the late 1600s. And our final photo-op is at the corner of Main and Harmony in Preston, a fitting way to end our adventures on main streets in Caroline County.

Next month we’ll report on our travel through Baltimore County.