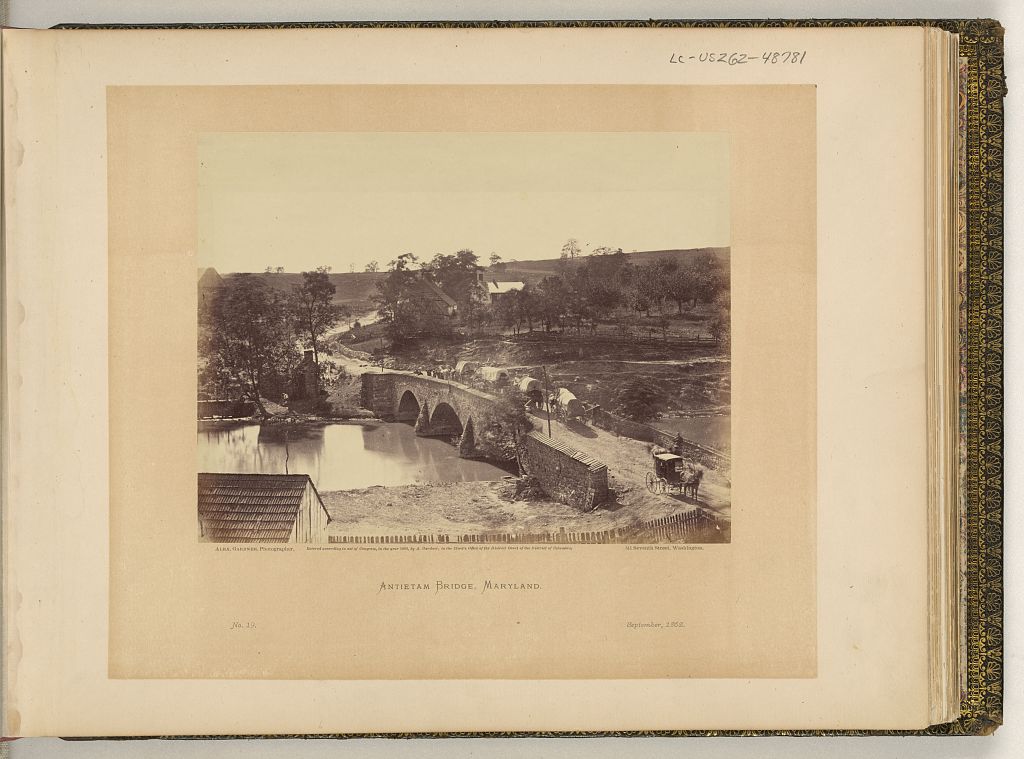 Image of Battle of Antietam courtesy of the Library of Congress

Video Dispatches on the Anniversary:

Prior to September 17, 1862, Sharpsburg, Maryland, and the fertile fields which surrounded it was like many other small hamlets in Maryland. Agriculture was the focus and was carried out by the descendants of original German and Scots Irish settlers. Working alongside many of those farmers, merchants and tradespeople were scores of African Americans — both slave and free.

Given its location in a narrow portion of the state, Sharpsburg was also a place that sat the precarious boundary between slavery and freedom. From these fields, the naked eye could see the mountain gap formed by the Potomac and Shenandoah Rivers at Harpers Ferry, Virginia (today West Virginia) as well as a spine of the Blue Ridge mountains which extends well into neighboring Pennsylvania. Literally and figuratively, one could see slavery and freedom from these fields.

Today, most visitors to the battlefield spend hours pouring over the story of September 17, 1862, a date that lives on in infamy as America’s bloodiest. But, often missing in the recitation of tactics is the ability to see the layers of history which make places like Antietam so unique and capable of speaking to a much larger chapter of history.

The story of America’s approach to Civil War, the impact of war on all aspects of society, and the enduring legacy of the conflict are stories that can be told at Antietam if one knows where to look. Thankfully, over the past twenty years, the National Park Service has vastly improved this interpretation and has begun the necessary work to elevate those stories — but for many visitors, these stories and layers of history still remain unknown and untold.

As a part of Preservation Maryland’s broader and ongoing effort to tell the full story of the state’s history, these short videos chronicle several sites and locations imbued with the layers of history which tell the rest of the story at Antietam. These snapshots from the field are far from comprehensive but are instead designed to open a door and dialogue to Antietam’s broader history.

“The real war will never get in the books.” — Walt Whitman

In this short introduction to the layers of history at the Antietam Battlefield, Preservation Maryland Executive Director Nicholas Redding explores the power of Antietam’s full story and the value of a preserved landscape.

The church of the bretheren: The “Dunkers”

In this short video, Redding speaks briefly with acclaimed Civil War historian and author Dennis Frye, about the Church of the Brethren, better known as Dunkers, and the legacy of their simple white meeting house on the battlefield.

“…a set of farm buildings in our front were set on fire to prevent them being made use of by the enemy.” – Confederate General Roswell S. Ripley

Redding makes a stop at the Mumma Farm, site of the only intentional destruction of civilian property on the battlefield — and a documented site of slavery prior to the war. A place where the central cause of the war is rooted in the landscape.

slavery and freedom at the roulette farm

Redding walks up the farm lane from the Mumma Farm to the Roulette Farm, standing at the center of what would become the battlefield itself. Here again, slavery, freedom and conflict is rooted in the the preserved landscape.

tolson’s chapel: a monument to PERSEVERANCE

For the final stop, Redding heads to Sharpsburg to visit with Edie Wallace of the Tolson’s Chapel museum, who helped to oversee the rehabilitation of the former Freedman’s Bureau school and church. It is here, in her words, that the “rest of the story” of Antietam unfolds.

The Great Task: preserving the layers

Thanks to the dedicated work of countless preservationists over many generations, the Antietam Battlefield is an extremely well preserved landscape.

Antietam’s story — all of it — from settling to slavery and from freedom to battle is there if you seek it out.

Make a donation to support our work

Learn more about the legacy of slavery at antietam