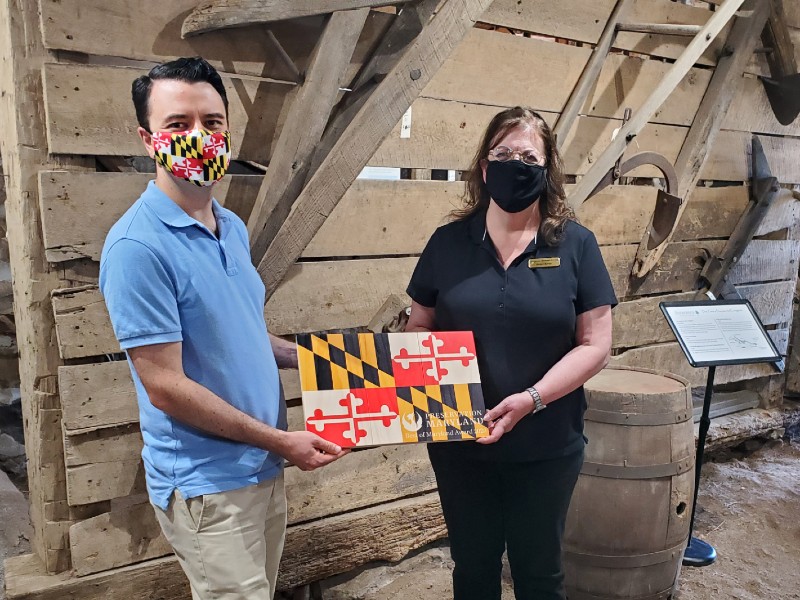 The Evergreen Barn in Allegany County is believed to be the last remaining 18th-century barn in Western Maryland and was the site of concerted preservation and reuse effort to reimagine the future of this stunning barn. Kickstarted by a feasibility study in 2015, major repairs in 2018, and the grand opening of the barn as an architectural museum complete with an exhibit called, “Living Off The Land,” the Evergreen Heritage Center Foundation has exemplified careful and creative stewardship and are well-deserving of this Preservation Maryland Stewardship Award. You don’t have to take our word for it; just ask the over 9,000 Western Maryland kids who are “edutained” on-site each year. 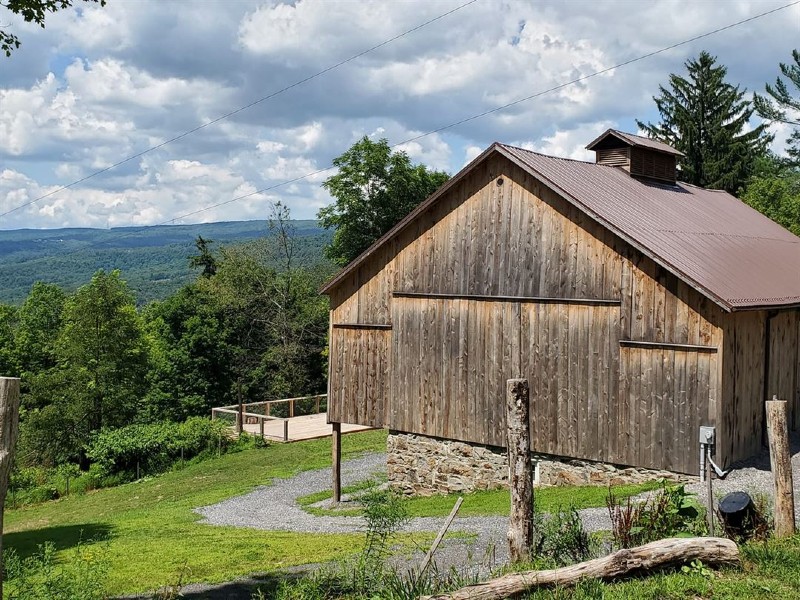 MORE FROM THE NOMINATION:

The subject of this nomination is the Evergreen Heritage Center (EHC) Foundation’s recent project to preserve and restore the EHC’s 200-year-old Evergreen Barn, which per the Maryland Historical Trust (MHT), is the only barn of its era remaining in Western Maryland. This study was conducted by the team of Keast & Hood, Cho Benn Holback, and Douglass Reed, who all became involved in the project as the result of a Barn tour in 2015, during which they noted its professional construction and expert use of proven 18th-century building techniques.

Following that Study, in 2016, the team proceeded to develop drawings and speciﬁcations for the restoration and renovation work. Then in 2017, these documents were used to perform the repairs/restoration, which was successfully completed under budget and ahead of schedule in September 2018. This work, funded in part by France-Merrick, the Community Trust Foundation, and the EHC Foundation resulted in the preservation of an architectural showcase of 18th-century craftsmanship. It also provided a multi-purpose venue for education and events on the upper ﬂoor and the site for the EHC’s newly created Living oﬀ the Land Agricultural Museum in the lower stables.

The project site is the Evergreen Heritage Center (EHC). The EHC, located on 130 acres of “Federal Hill” in Allegany County, is a historic Maryland estate that pre-dates the Revolutionary War. The property has been listed on the Maryland Historical Trust inventory since 1976 and was added to the National Register in 2015. The EHC features a six-bedroom mansion (now the Evergreen House Museum), its companion Evergreen Barn, multiple gardens and orchards, plus 100 acres of managed forest, trails, and beautifully landscaped grounds, all in a picturesque location bordering the Great Allegheny Passage and Western Maryland Scenic Railway. The EHC is not only a historical treasure but is protected under a conservation easement and provides a showcase of best practices in environmental conservation, demonstrating how to “live oﬀ the land” while preserving it for future generations. 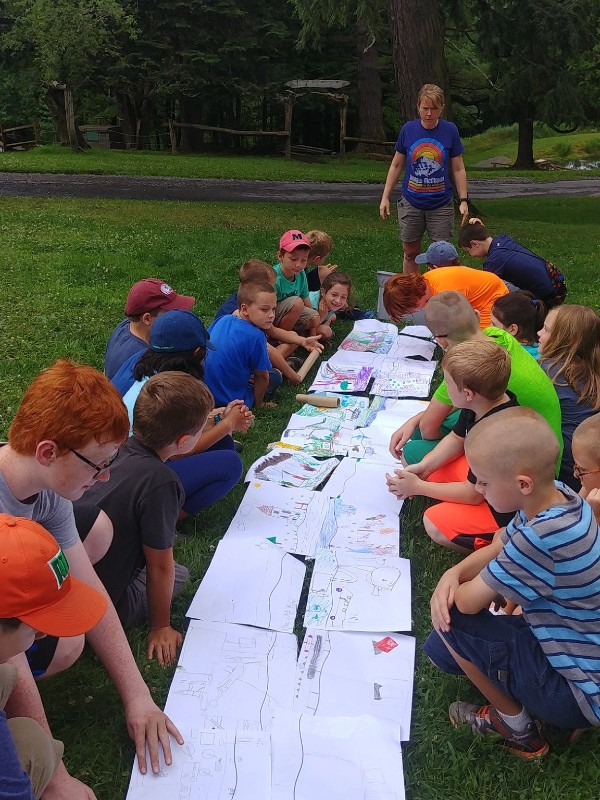 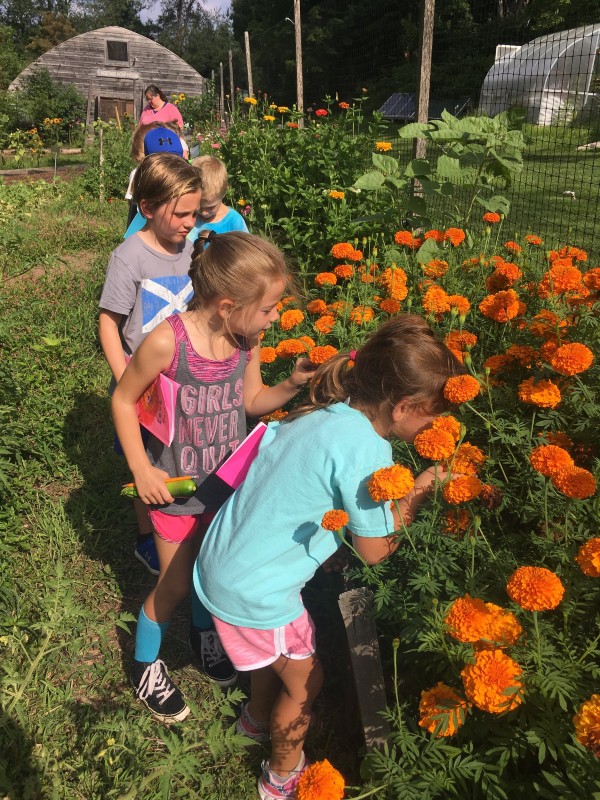 The EHC Foundation, a 501 (c) (3) public charity, was founded in 2008 to leverage this historic property to empower Western Maryland children, youth, and adults by providing hands-on STEM (science, technology, engineering, and math) education in a county where the average per capita income is the lowest in the State, 75% of elementary school children qualify for USDA’s Free and Reduced Meal Program, and the School Readiness assessment of kindergarten children is less than 40% (on par with Baltimore City and Baltimore County).
To pursue that mission, the Foundation and its partners (including Allegany, Garrett, Washington County Public Schools, Allegany College of Maryland, the Chesapeake Bay Foundation, Frostburg State University, Garrett College, and the Maryland State Department of Education) have developed multiple programs for the beneﬁt of the Western Maryland community, particularly its disadvantaged children. These programs currently serve over 9000 children and youth annually through school ﬁeld trips, in-school and outreach programs, summer camps, teacher training, and events for children and families, while consistently increasing student ag and science literacy by 25-50% per class per pre/post-tests

Regarding the Barn’s signiﬁcance, under MHT Criterion A, the property is signiﬁcant in terms of its contribution to the successful settlement of western Allegany County beginning circa 1780 when Edward Grimes migrated west from Frederick and built the original Evergreen House and Barn on four ﬁfty-acre “military lots”. By 1794, Mr. Grimes was one of the ﬁrst County Commissioners from the newly formed County, and his son-in-law (also a County Commissioner) was operating the area’s ﬁrst sawmill. Two other County Commissioners subsequently owned the property: William Ridgeley who ﬁled the ﬁrst layout of the town of Frostburg and fostered the partnership between the B&O Railroad and the C&O Canal, and George Winter who operated one of the area’s ﬁrst woolen mills and a nearby inn on America’s ﬁrst National Road. In 1869, the property was acquired by the Trimble family, became part of the area’s largest farm (over 1100 acres), and was given the name Evergreen for the ﬂedging evergreen trees planted there. All four of these families facilitated the growth of Allegany County, the state of Maryland, and in terms of commerce and transport, the new nation. 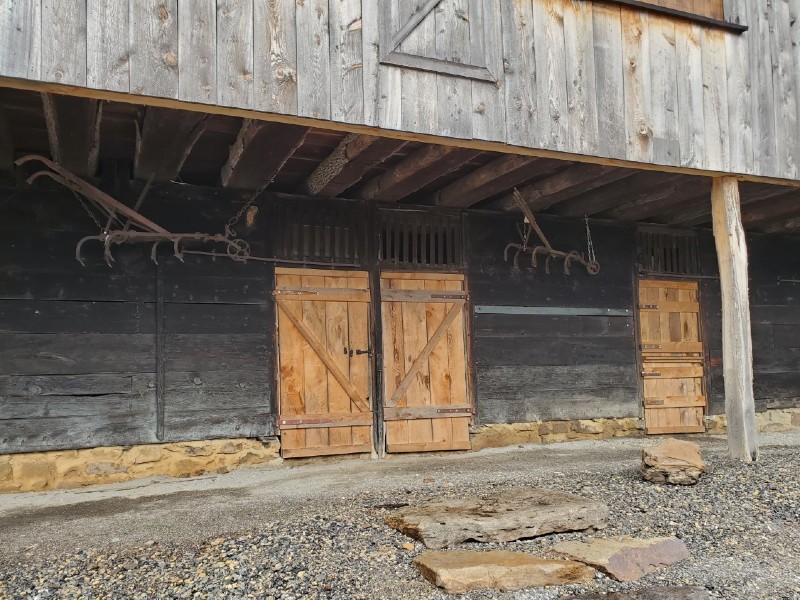 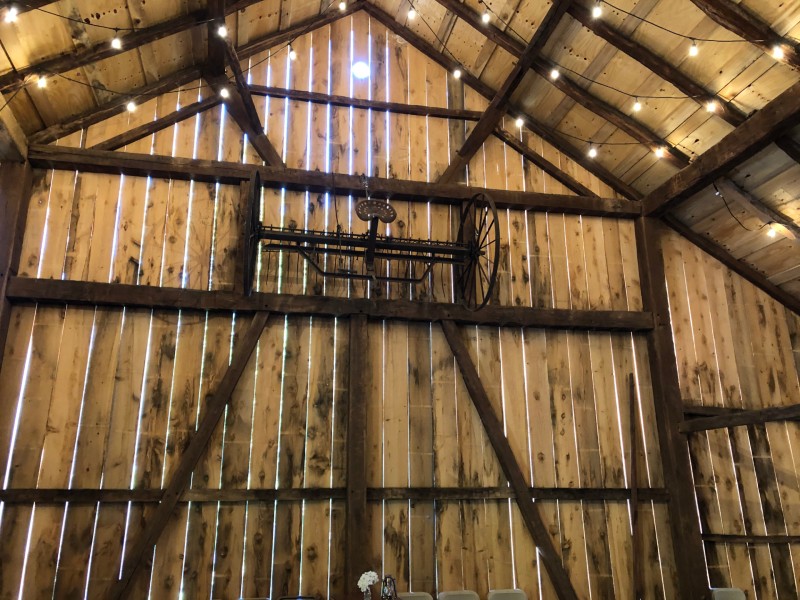 The property is also signiﬁcant under Criteria C since the Evergreen Barn displays many of the classic architectural features of an 18th-century colonial-style bank barn. With its steep asymmetrical roof, open forebay, cantilevered broad-axed beams, wooden pegs, hand-wrought nails, mortise and tenon construction, and log troughs, the Barn represents the design and workmanship of the period and showcases the land’s stone and timber materials.

After the Barn’s restoration/renovation work was completed in the fall of 2018, the Barn was then available for both the EHC’s education programs and for community events. In the fall of 2019, the EHC then began another Barn project: the design and implementation of the Living oﬀ the Land Agricultural Museum in the lower Barn stables. The recently completed project will now enable thousands of visitors, both in-person and on-line through videos, to experience 200 years of Western Maryland agricultural history as they view over 200 ag artifacts and storytelling displays.

This Agricultural Museum will now join the Evergreen House Museum the historic Evergreen farmhouse, as well as the property’s Heritage Sawmill, gardens, greenhouses, ﬁelds, 100-acre forest, and pond as part of a unique showcase of best practices in historic preservation, environmental conservation, and education.

COME TO OUR AWARDS EVENT